Fresh Off a National Book Tour, Back to the Classroom 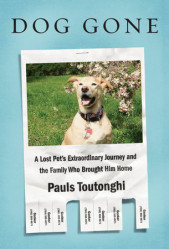 For Associate Professor of English Pauls Toutonghi, summer break meant a three-month national tour for his newly released narrative nonfiction book, Dog Gone. Now he’s back in the classroom, teaching creative writing and encouraging his students to mine their own lives for stories.

“My writing is vital to the work I do in the classroom because it shows—ideally—that I’m out there, doing the exact things that my students are trying to do,” explains Toutonghi. “We’re collaborators in an art. Their energy and enthusiasm feeds my work, at the end of the day, because I’m constantly remembering how I saw art and creative writing at the age of 20. It’s quite sustaining.”

Teaching from practice, Toutonghi unflinchingly draws from his own life as source material. Toutonghi was born in the state of Washington to parents from Egypt and Latvia. His critically acclaimed debut novel, Red Weather, explored the experience of an American boy born to Latvian parents who becomes infatuated with socialism through romance, and his lauded follow-up, Evel Knievel Days, is the story of a young man born to an Egyptian father and American mother, who travels to Cairo to dissect his identity.

Nominally about a family’s desperate search for their beloved dog gone missing on an Appalachian Trail hike, Toutonghi’s new offering once again taps his own family’s stories and dynamics as it examines ideas of intergenerational responsibility and loss. The book is already earning praise: The Washington Post called it “well-written and fast-paced.”

Though Toutonghi’s writing career is now well established, it’s worth noting that it took a caring teacher to illuminate the possibility. As The Oregonian wrote about him in a profile in 2012:

Writing is all about editing, and writing is all the 36-year-old Toutonghi’s ever wanted to do since a teacher at Garfield High School in Seattle pulled him aside after he’d turned in his first short story and asked him if that’s what he planned to do with his life. It hadn’t occurred to Toutonghi, even though his brother was publishing poetry and his grandfather won a poetry prize in Egypt before World War II. Once the idea of being a writer got into Toutonghi’s head, however, it stayed there.

Toutonghi, a Pushcart Prize winner and one of three undergraduate professors honored by Lewis & Clark this year with a Lorry Lokey Faculty Excellence Award, has written for The New Yorker, The New York Times, Zoetrope, Salon, Virginia Quarterly Review, Granta, Tin House, and numerous other periodicals. In 2015 he led Lewis & Clark’s Overseas Study Program in Morocco.