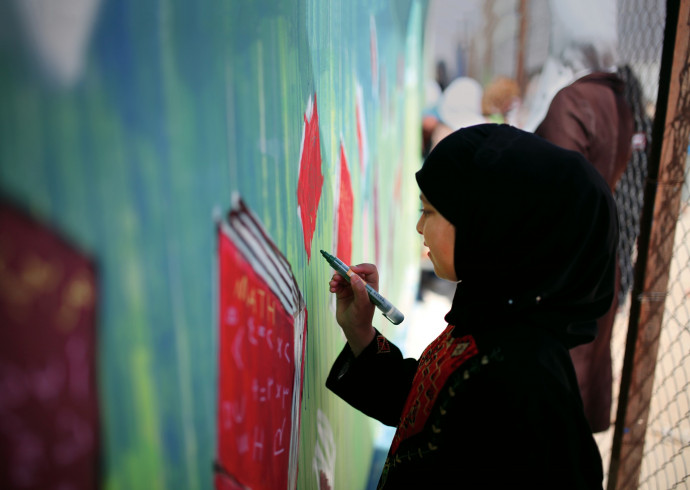 A young Syrian refugee paints a street mural as part of an aptART workshop in the Zaatari refugee camp in Jordan (Photo by Samantha Robison BA ’06).

Painted on the side of the half-empty concrete warehouse is the face of a young girl, arms out-stretched and head tilted skyward, against a bright blue and green arabesque.

From a distance, her hands appear to be holding mounds of reddish-colored earth; but upon closer examination, these mounds transform into collections of objects.

Arabic phrase, painted in variegated hues from red to yellow, reads, “The future is in my hands.”

The roughly 25-by-75-foot mural is a landmark at the entrance to Zaatari, one of the world’s largest enclaves of Syrian refugees, located in northern Jordan.

Its vibrant hues stand in marked contrast to the beige landscape of mostly barren desert and scores of modular housing units.

Most of the mural was painted by acclaimed Brooklyn-based mural artist Joel Bergner—including the girl, who is an actual camp resident.

But the Arabic lettering and the arabesque, a familiar Middle Eastern artistic motif, is the work of a Syrian artist who also resides in Zaatari.

The objects in the girl’s hands—a Ferris wheel, an airport, people, trees—were painted by dozens of the camp’s children, who were asked to depict favorite things in the community they left or the one they wished to build. 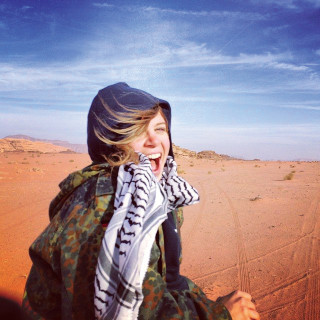 The collaborative, community-inspired mural epitomizes the work of Awareness & Prevention Through Art, or aptART, an organization founded by Samantha Robison BA ’08 that uses street art to give a voice to people trapped by poverty and conflict.

Robison relies on a network of global street artists to carry out community mural-painting projects in tense locales in east Africa and the Middle East.

The subject matter is weighty, and has included HIV/AIDS (Mozambique), peace and reconciliation (eastern Congo), and gender equality (Jordan).

Robison’s goals: to jump-start conversations on important topics that may be hard to broach, to give kids living in tough circumstances a creative outlet for expression, and to amplify the voices of people who are often ignored.

“Street art is an egalitarian art form. It’s something that can be created by anyone and is intended for everyone,” says Robison.

“Everyone from a president to a prostitute sees this art.”

Indeed, all visitors to Zaatari—whether freshly arriving refugees or foreign dignitaries—pass by the large-scale mural.

AptART has also done about two dozen murals inside the camp, most on the theme of hope and hospitality, as the camp’s 80,000 refugees try to maintain their dignity and coexist with their Jordanian hosts.

“Our niche is working in difficult locations where other people might not see the opportunity,” says Leah O’Bryant BA ’07, who roomed with Robison at Lewis & Clark and helped build the administrative side of aptART. “It’s something we’ve always valued.”

In the five years since its founding, aptART’s profile has risen significantly.

Last May, they were commissioned to create a large-scale artwork for the U.N. World Humanitarian Summit in Istanbul, and they have exhibited work from their projects in European capitals such as Paris, Berlin, and London.

After a start-up phase that involved self-funding projects and scraping by on volunteer labor, aptART is now regularly solicited by international funders including the United Nations and the European Commission.

“We try to amplify people’s voices within their own communities and outside of it, by doing exhibitions and promoting our work through social media,” Robison explains.

“We want people to hear what they have to say. And I think the key is to find the positives in their lives. These are people, they’re human beings, let’s tell some of their stories.”

Robison traces her interest in art to her child-hood in Poolesville, Maryland, a town of 5,000 people about 30 miles northwest of Washington, D.C.

Her father was a writer for the Indian Health Service, and her mother taught English literature at a local community college.

Both appreciated art—Robison’s dad had converted a spare bedroom into a painting and woodworking studio—and encouraged her creativity.

Robison chose Lewis & Clark College from among other liberal arts schools mainly because the Northwest seemed like “an adventure.”

After settling in at the college, she chose political science as a major and art as a minor. Initially, she says she wore “ambition blinders” due to growing up near D.C.; she measured success only in terms of a career in politics or law.

Neither experience inspired her. 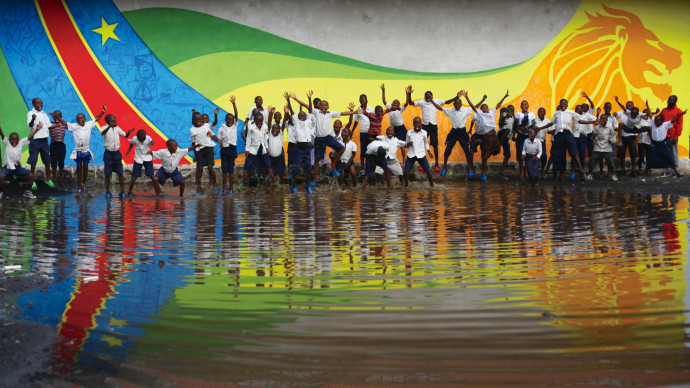 When she returned to Lewis & Clark, several professors helped broaden her career horizons.

In ethics class, Assistant Professor of Political Science John Holzwarth “would always tell us there’s no right or wrong, there are just strong arguments and weak arguments.”

Cyrus Partovi, senior lecturer in social sciences, emphasized the shades of gray in Middle Eastern politics. And her ceramics instructor, Associate Professor of Art Ted Vogel, encouraged her to explore outside established boundaries.

“Whatever crazy idea I was coming up with, Ted would say, ‘Yeah, Samantha, go for that.’ ”

“They all taught me that you don’t have to measure success in these rigid, conventional ways,” says Robison. “There are a lot of ways you can be successful and have an impact.”

During her last summer at Lewis & Clark, Robison went abroad to teach English in Thailand. She loved the experience, and after graduation landed a teaching job in South Korea.

Soon after, during a holiday break on the beaches of southern Cambodia, she was approached by a boy publicizing a children’s art show. He belonged to an organization that sponsored art projects for street kids.

Robison ended up volunteering and being asked by its founder, a Spanish expat, to travel to Mozambique to scout a possible expansion. 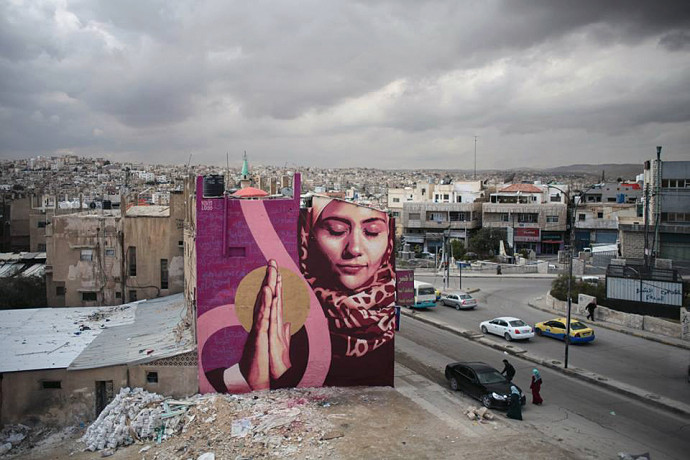 Robison recruited O’Bryant, her former roommate, to join her in Mozambique. The two embedded themselves in a village near a popular surfing town, sleeping on the dirt floor of a traditional hut and volunteering at a local school. A few months into their stay, their patron in Cambodia called and said he was dropping his expansion plans.

At that point, O’Bryant recalls, “Sam, true to form, said ‘Well, great, I’m going to do it myself.’ And that was the initial catalyst for aptART. It was her saying, ‘If this is where I want to be and the kind of work I want to do, then why don’t I just start my own organization? ’ ”

“She’s kind of a defiant person in some ways and won’t be put down or put off,” O’Bryant continues. “It’s like, ‘Fine, you’re putting up a road-block? I’ll find my way around it.’ ”

Robison’s first obstacle was a sizable one:

Although she wanted to run a project that used street art to address the taboo around HIV/AIDS in Mozambique, she couldn’t attract grant money because she lacked the required track record.

So she returned to the semi-lucrative work of teaching English abroad, this time in Iraqi Kurdistan. At the same time, she asked a London-based aid worker she met in Mozambique, Nick Renn, to work on registering aptART as a U.K. nonprofit.

“Samantha has an unwavering drive to succeed,” says Renn, who is now a member of aptART’s board of directors. “That we got it up and running at all was no small feat. It’s something that not many people can say they’ve done, especially before the age of 26.” 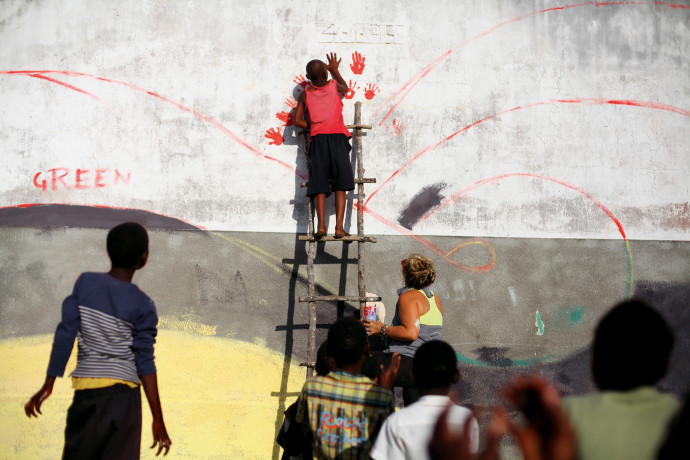 Renn also introduced her to British artist Jonathan Darby, who joined Robison as the organization’s creative director when she returned to Mozambique a year later. 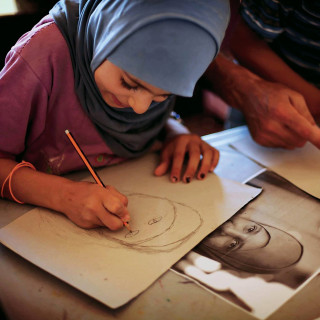 A young artist in the Zaatari refugee camp, Jordan (Photo by Samantha Robison BA ’08)She used her savings from teaching to fund a project titled “A Free Generation Starts With You” with Mozambican artists and a local HIV/AIDS nonprofit.

The project included workshops that combined art instruction, open forums, and large-scale murals. It encouraged youth to express both their uncertainties and their understanding of the epidemic through art.

The self-financed project gave her the credentials to expand with support from a number of well-known funders, including the President’s Emergency Plan for AIDS Relief, known as PEPFAR, and the Mercury Phoenix Trust, a foundation created in memory of former Queen frontman Freddie Mercury.

Next, aptART teamed with War Child, a London-based nonprofit focusing on children in war zones, to paint the walls of children’s centers in conflict-torn eastern Congo with themes of unity.

The work garnered coverage from the U.K.’s Guardian newspaper, which led to mural projects in Syria, Gaza, and Jordan.

“I really wanted to work in areas where I felt the real voice of the people wasn’t being heard,” Robison explains, “where the media narratives don’t necessarily reflect the lives of the people there. I don’t want to speak for them, but I think I have an ethical responsibility as a global citizen, as a human being, to amplify their voice if I can.” 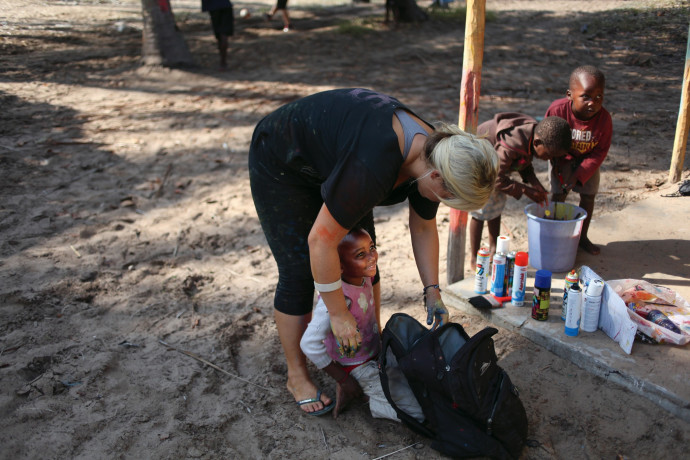 Robison slowly built a network of accomplished street artists whom she recruited to join projects. Some, including Madrid-born artist Ruben Sanchez and the German duo Herakut, boast social media followings in the tens of thousands.

“Samantha has an incredible ability to bring people together,” says O’Bryant, “and to get people interested in a project to the point where they want to bring their network and expertise to make it happen.”

A typical project starts with aptART being asked by another nonprofit or funder to buttress a broad programmatic theme such as reconciliation or women’s equality. 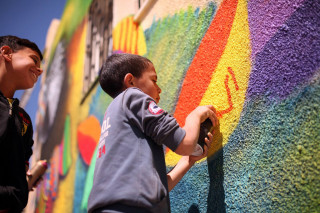 A young artist in Ajloun, Jordan (Photo by Samantha Robison BA ’08)Focus group discussions and workshops help shake out key messages and ideas, as well as possible mural locations. Robison recruits a lead artist whom she feels is best suited for the locale, and often brings in a local artist to collaborate.

The result is the community’s ideas professionally presented in the artist’s style, with a portion of the mural set aside for the community to paint with a specific set of colors. 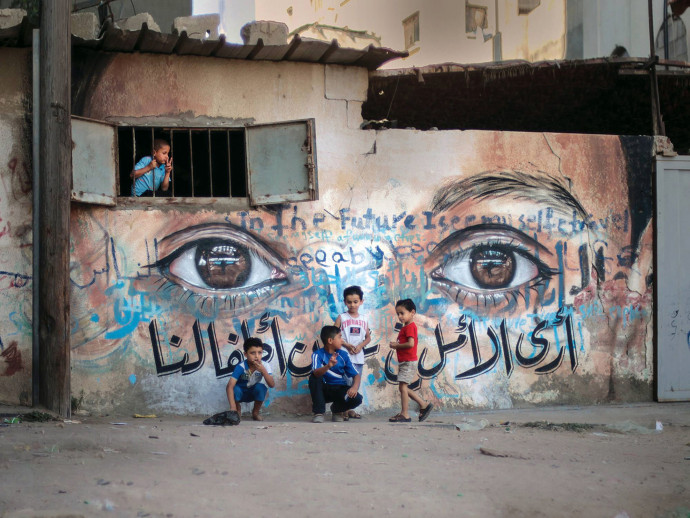 Community service and leadership are hallmarks of a Lewis & Clark education. In 2014–15, students from the undergraduate, graduate, and law schools engaged in more than 358,000 hours of community service.

In many ways, the organization still operates in start-up mode. Robison, O’Bryant, and Darby are its only three full-time employees.

“My official title is executive director, but as far as the day-to-day, it’s making sure things get done,” says Robison, who also plays a key role in documenting the projects with high-quality photographs and video.

She doesn’t own a car and lives out of her backpack, crashing with friends in London or Berlin when there’s not a project in progress.

At the moment, however, the project pipeline is full.

She’s in talks with U.N. officials in New York about illustrating its sustainable development goals through murals in several countries.

She’s returning to Portland to lead a project painting several public walls downtown and in the Central Eastside Industrial District, in collaboration with the Mercy Corps Action Center and the Regional Arts and Culture Council.

And she’s carved out time to work with Darby on a photo book that chronicles the first five years of aptART projects.

The next five years of aptART, however, are not mapped out, Robison says, partly because the whims of the humanitarian aid industry make planning difficult, and partly because she enjoys growing organically.

She knows the difficulty of starting and maintaining an organization like hers, and is cautious of making grandiose plans.

“We’re going to take this one project at a time, and we’re going to do the best on every project we do,” she says.

“At this point, that’s my takeaway: We’re not going to make massive changes to a country, or even the world, but what we can do is inspire people through art.”

Dan Sadowsky is a video producer and editor based in Portland.

He previously spent eight years as an online storyteller with Mercy Corps, a global humanitarian organization.