Laughing Our Way Through Awkward Conversations

In the pilot episode of CNN’s United Shades of America, host W. Kamau Bell has coffee with an earnest, out-in-the-open member of the Ku Klux Klan, before attending one of their cross burnings in a clearing in the forest. It’s fair to say that Bell is a proponent of awkward conversations. It’s also fair to say that in what feels like a tectonic shift for the nation, Bell’s message-driven comedy points to a difficult but navigable path forward.

Bell brought his socio-political comedy and observations to Lewis & Clark’s Agnes Flanagan Chapel on Monday, November 7, 2016. The evening started with an hour-long comedy set from Bell, featuring material from his just released comedy album, Semi-Prominent Negro. The evening concluded with a crowdsourced question-and-answer session with Lewis & Clark President Barry Glassner and Campus Activities Board Cochair Izzy Vaccaro ’17.
Over the course of the evening, Bell riffed on topics from the presidential candidates to the Black Lives Matter movement to police reform, gentrification, and the complexities of progressively yet realistically parenting biracial children. He implored audience members to get themselves into uncomfortable conversations.

“The number one way to get better at having those conversations is to get off social media,” Bell said in an interview before the show. “I fall into that trap, too, of treating human interaction as if it is a video game, and you’re scoring points on another person.” 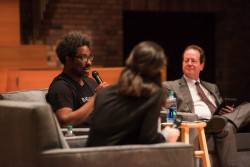 Photo by Ted Jack ’15Underscoring that point, Bell spoke in his pre-show interview about the recent Saturday Night Live “Black Jeopardy” sketch, which aired in the weeks leading up to the election and featured guest host Tom Hanks playing a blue-collar white man who finds himself on a fictionalized Black Jeopardy set. The sketch played on the racial tensions heightened by awkwardness and assumptions.
“Awkward conversations can lead to awkward discoveries. That sketch was black people having this awkward discovery about this poor white guy. Like, ‘Wait a minute, are we kind of the same?’ And it also shows the value of a diverse cast. Because there were years SNL couldn’t have pulled that sketch off because they didn’t have three black people.”

In addition to his standup comedy, Bell is involved with a number of podcasts, including the deeply inquisitive Politically Reactive, a podcast he cohosts with Hari Kondabolu (who performed at Lewis & Clark in 2015). Featuring thoughtful, longform interviews with journalists and academics, the podcast showcases Bell’s commitment to critical thinking and unflinching conversations.
Bell’s appearance at Lewis & Clark came at a critical moment, and not just for the temporal juxtaposition with the election and the 13th annual Ray Warren Symposium on Race and Ethnic Studies, which ran from November 9 through 11. Bell’s message of dialogue and discovery is a key ingredient in the antidote to division, discord, and distrust. Here’s to owning the awkward.