Open This End: Contemporary Art from the Collection of Blake Byrne

An exhibition of both iconic and lesser-known works from 35 of the most significant and compelling artists of the last fifty years, Open This End: Contemporary Art from the Collection of Blake Byrne will trace a number of intertwined narratives in the history of recent art, from the 1960s to the present. The exhibition’s title comes from a 1962 painting by Andy Warhol, the earliest work in the show, and frames the exhibition as a present to be unpacked, a surprise that audiences will delight in discovering.

Many of the narratives the exhibition traces began in the 1960s. Pop Art (represented by Warhol and Ed Ruscha), Conceptual Art (by Ruscha, John Baldessari, and Bruce Nauman), and Minimalism (by Agnes Martin and Tony Smith), for example, gave rise to the Pictures Generation art of Cindy Sherman, Louise Lawler, and Sherrie Levine, as well as to later practices, such as those of Rita McBride and Christopher Williams. The German variant of Pop Art put forth by Gerhard Richter and Sigmar Polke may be seen as a forerunner to the paintings of European artists Martin Kippenberger, Albert Oehlen, Marlene Dumas, and Luc Tuymans. The body-oriented performance art of Vito Acconci and Paul McCarthy finds echoes not only in McCarthy’s later work, but also in the psychologically inflected art of Mike Kelley, Martin Kersels, and Douglas Gordon.

Drawing on the same legacies from the 1960s and ’70s, as well as important antecedents such as the work of David Hammons, artists beginning in the 1990s focused on the personal as political.  he work of Glenn Ligon, Mark Bradford, Paul Pfeiffer, Kehinde Wiley, and Wangechi Mutu touches upon issues of race, culture, and identity, including African-American identity. The art of Robert Gober, Jack Pierson, and Nicole Eisenman addresses sexuality, loss, and the vulnerable queer body in the age of AIDS. Figurative sculptors such as Juan Muñoz, Thomas Houseago, and MatthewMonahan also picture the body, subject to various deformations, both artistic and psychological.

Open This End: Contemporary Art from the Collection of Blake Byrne aims to present contemporary art as a compelling subject, rich in connections to, and considerations of, history, culture, politics, and human subjectivity. A dense and heady weave of interconnected themes, formal affinities, and historical alignments, the works in this exhibition provide both visual and intellectual delights. 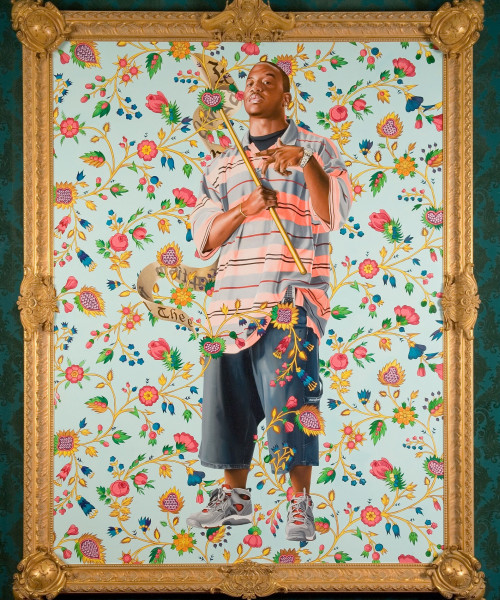