As a lawyer and advocate who has represented victims of human trafficking for 15 years, Chanpone Sinlapasai JD ’02 has heard her share of horror stories.

The one she shares most frequently—to help people wrap their heads around what human trafficking entails—is about a young girl from Laos. She was sold to traffickers by her own parents; smuggled into the U.S. using false information; and forced to work as a nanny during the day and a prostitute at night.

Sinlapasai represented the woman decades later, after she was charged with felony drug possession and prostitution and targeted for deportation. Sinlapasai challenged her removal in immigration court, arguing that the woman qualified for a special visa that offers protection to victims of human trafficking.

“I eventually won her case, but it was heartbreaking,” Sinlapasai says. “And it is not an isolated situation.”

Sinlapasai has made a name for herself in the local immigration law scene not only because she specializes in protecting trafficking victims —an uncommon niche—but also because she’s involved in so many efforts to support refugees beyond her own law practice.

Sinlapasai has made a name for herself in the local immigration law scene not only because she specializes in protecting trafficking victims —an uncommon niche—but also because she’s involved in so many efforts to support refugees beyond her own law practice.

Her work at Marandas Sinlapasai—a 10-person immigration law firm in Lake Oswego, Oregon, which she cofounded in 2015—focuses on protecting the rights of foreign-born nationals who have been victims of serious crimes, such as human trafficking, domestic violence, and rape. Under U.S. law, these people are eligible for special visas that remove any threat of deportation.

Sinlapasai says her firm juggles more than a hundred active cases at any time. Most start with referrals from law enforcement, nonprofit agencies, doctors, mental health workers, or foreign consulates. About 70 percent of her cases are from Oregon, but she also consults on human trafficking cases throughout the U.S. “The circle of people who work in this area is very small,” she says.

Also known as modern slavery, human trafficking is defined by the U.S. Department of State as “the act of recruiting, harboring, transporting, providing, or obtaining a person for compelled labor or commercial sex acts through the use of force, fraud, or coercion.” Former U.S. Secretary of State John Kerry last year called human trafficking “a multi-billion-dollar criminal enterprise” and “a threat to global stability.” The Polaris Project, a nonprofit that operates the National Human Trafficking Hotline, estimates that the total number of victims in the U.S. reaches into the hundreds of thousands.

“We’re one of the few private firms that work in the world of human trafficking, to protect survivors once they’re identified,” says Sinlapasai.

In addition to her caseload, Sinlapasai devotes significant time to efforts that improve life for immigrants or relationships between immigrants and law enforcement (see related article on page 25). Most notably, she’s the founder and organizer of Refugee Adjustment Day, an annual 12-hour event in Portland for refugees seeking to become legal permanent residents.

The event grew out of a single pro bono case in 2009. Sinlapasai helped a young man from South Sudan finally obtain his green card. His parents had never adjusted his immigration status—partly because they could not afford to pay the fees. (Refugees can be placed in deportation proceedings if they do not apply for permanent residency within a year of living in the U.S.) The most recent Refugee Adjustment Day last July brought together dozens of lawyers, state and municipal officers, law enforcement, refugee resettlement agencies, and volunteers to provide free assistance to more than 140 people.

“These are refugees who don’t otherwise have access to legal services, but she makes it happen,” says Melina LaMorticella JD’10, an immigration attorney with Tonkon Torp and chair of the Oregon Chapter of the American Immigration Lawyers Association. “What stands out about Chanpone is her level of compassion. When you work with her, you learn that she will not rest until every refugee who deserves a green card has one.”

LaMorticella and other colleagues marvel at Sinlapasai’s drive. In addition to her work and volunteer efforts, she helps manage a household of three children between the ages of 10 and 13 with her husband, Rick Okamura JD ’03, a civil litigation lawyer.

“She has the most incredible amount of energy I’ve seen in a human being,” says Portland FBI spokeswoman Beth Anne Steele, who worked with Sinlapasai to put on a summer leadership academy for local teens. “If you need something, Chanpone is there for you. I have no idea how she does it all.”

Asked to explain her energy and motivation, Sinlapasai says, “When I was growing up, it took the kindness of strangers to help us through a difficult time. It’s very important for us to give back to help others make that transition, to let them know there are good people in the world that care about them.”

Sinlapasai was born in Laos to laboring-class parents. Her dad had been recruited by the Americans during the Vietnam War, so when the Communists took over Laos in the 1970s, the family fled for a United Nations refugee camp in Thailand. A year later, they flew to Stockton, California, after accepting resettlement from the United States. Sinlapasai was 5 years old when she arrived.

It was a painful transition for her and her family. She shared a two-bedroom apartment with as many as 21 relatives; was bullied at school; and had difficulty learning a new language and coping with new surroundings. “For a long time, I was just trying to survive: to walk to school and be okay.”

As the eldest of seven cousins, Sinlapasai was tapped by her uncles and aunts to help navigate the byzantine U.S. immigration system as they sought to become permanent residents and eventually citizens. From as early as age 8, she recalls, “I’d be pulled out of school to be their interpreter and their advocate” at the San Jose immigration office, more than 100 miles away. Sometimes they’d wait in line overnight to ensure they’d get a face-to-face meeting with an official. “The process was not very friendly.”

Newcomers also had to be wary of “notarios,” self-proclaimed lawyers who ingratiated themselves into immigrant communities and took advantage of their lack of familiarity with the process. “The reason I practice what I practice is that my family was duped,” she says. “We had unscrupulous individuals who stole money from us, who said, ‘Give us your earnings, and we’ll file these papers for you.’ And they didn’t.”

Sinlapasai paid for college at Santa Clara University while working full time as a receptionist at a Bay Area high-tech firm. She worked another year to save up money for law school and received a partial scholarship from Lewis & Clark Law School. “I knew I wanted to help the most vulnerable populations,” she says, and was drawn to the school’s public interest law program.

During law school, she worked in a family law clinic, where she filed restraining orders on behalf of women in crisis. “Helping them try to explain in very limited words what the situation was—and then accompanying them to court and trying to be their voice—taught me so much about listening and being compassionate and empathetic,” Sinlapasai says.

“As lawyers we sometimes think only about what the law says,” she continues, “but drawing out all the facts of an individual case—and being able to tell a human story—is what makes you an effective lawyer.”

Drawing out all the facts of an individual case—and being able to tell a human story—is what makes you an effective lawyer. Chanpone Sinlapasai JD ’02

Sinlapasai is familiar with the stories of many immigrants in the Portland area. She recently completed a three-year term as board president of the Immigrant & Refugee Community Organization, a one-stop shop for new arrivals that offers job training and other community integration services.

“She has an awareness of how to honor people’s experiences,” says the Honorable Adrienne Nelson, a Multnomah County Circuit Court judge who taught Sinlapasai’s Race and Law seminar as an adjunct professor at Lewis & Clark Law School. “She’s great at meeting people where they are and finding common ground.”

Dishonest immigration consultants, like the one who defrauded Sinlapasai’s parents decades ago, are still preying on immigrants. And until recently, the actions of these so-called notarios went virtually unpunished in Oregon. Cases of notario fraud were simply referred to the Oregon State Bar for further review.

In 2015, Sinlapasai played a lead role in efforts to clamp down on the scam. As a member of Oregon’s Task Force on Immigration Consultant Fraud, she helped advance a new state law that gives law enforcement new tools to prosecute notario fraud. She helped review criminal statutes, vetted new policy proposals, and testified before a joint committee of the Oregon legislature. She told lawmakers the story of a monk who paid $5,000 to a self-proclaimed “immigration consultant” to help process his green card application. The files were incorrectly filed, the monk was placed in deportation proceedings, and there was no way to press charges against the perpetrator.

The stronger law went into effect in January 2017. Sinlapasai says she expects it to spare many families the financial pain and embarrassment her own family experienced.

Many of Sinlapasai’s outside activities are focused on raising awareness of human trafficking. To that end, she speaks at trainings of law-enforcement agencies and other first-line responders. There are still countries that don’t care enough about the practice, she says, and too many people who encounter victims but fail to recognize the crime.

Many human trafficking cases, she explains, begin as inquiries into other misconduct, such as theft or abuse, which are actually just symptoms of the underlying crime. And it happens across the United States: Every year since becoming fully operational in 2008, the National Human Trafficking Hotline has received documented cases of human trafficking in all 50 states and the District of Columbia.

“One day my goal is to take one of these cases to the Supreme Court, so we can shed light on the complexity of human trafficking,” Sinlapasai says. “Ultimately, I want to help change the way we protect women and children around the world.”

Dan Sadowsky is a video producer and editor based in Portland. He previously spent eight years as an online storyteller with Mercy Corps, a global humanitarian organization. 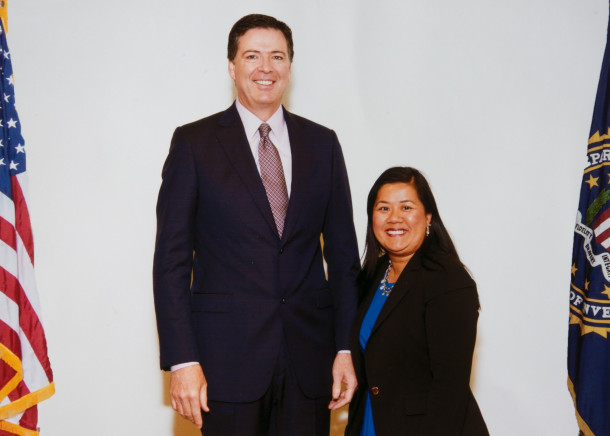