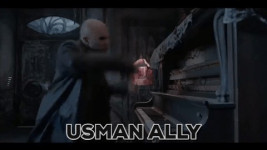 A member of Chicago’s American Theater Company, Usman Ally ’04 has starred in theatre premieres around the country, including an adaptation of Disney’s The Jungle Book, The Invisible Hand, Disgraced, and The Elaborate Entrance of Chad Deity. He has performed in television series such as Damages, BOSS, and Madam Secretary. And now a new audience gets to discover and enjoy his talents when they see him in the role of the Hook-Handed Man in the new and highly-anticipated Netflix program, Lemony Snicket’s A Series of Unfortunate Events.

In A Series of Unfortunate Events, Ally is tasked with playing a number of characters within a single role. The series follows three orphans, who seek escape from the villainous Count Olaf who is in pursuit of their parent’s fortune. Count Olaf, and his theatre troupe of misfits, create several disguises to try to get the fortune. Ally captures the humanity in his character in scenes where he is playing the piano, eating spaghetti, and challenging an infant to a poker match, all with two hooks as hands. He makes people feel empathy for the main villain’s sinister yet hilarious counterpart. 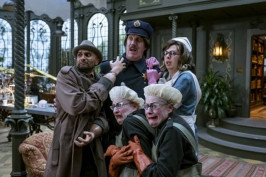 Ally’s talent and commitment to his craft garnered him a prestigious accolade: an Obie Award—the off-Broadway equivalent of the Tony Awards— for his performance in the play The Invisible Hand, by Ayad Akhtar. He was also the recipient of the IRNE award for Best Actor in a Musical for his role of Bagheera in Disney’s The Jungle Book.

“It’s sort of a balancing act,” Ally said in a recent interview. “With any character you get, it is crucial to find the human-ness within that character.”

Through all of his success, Ally still maintains his commitment and devotion to Lewis & Clark. Two years ago, Ally took home Lewis & Clark’s Outstanding Young Alumnus Award. While on campus to collect the honor, he demonstrated yet again his commitment to Lewis & Clark and fellow Pioneers by holding a master class for students in the Department of Theatre. He imparted to students this advice: “Consider a double major. It’s a lot of work, but it is worth it. My studies in theatre and sociology/anthropology enriched and informed each other. Take advantage of the opportunity to dive into more than one discipline!”


This story was written by Elise Wilde ’18.