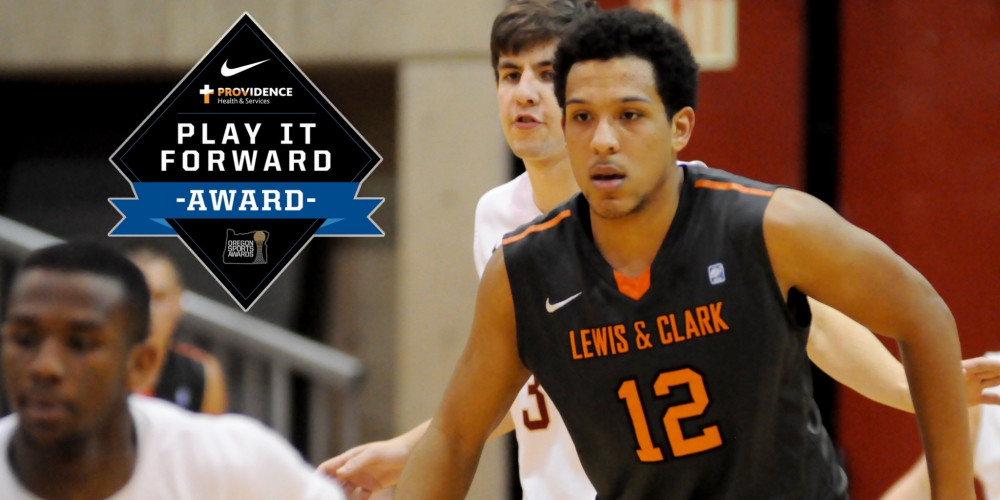 Biology alum Alex Jones ’17 is one of two collegians selected for the winter Play It Forward Award from the Oregon Sports Awards. Jones, a member of the men’s basketball team, has volunteered hundreds of hours to various causes over his four years as a student-athlete and was selected for his heavy involvement with Specialty Athletic Training, an organization that exclusively trains individuals with special needs, most of whom are children. Upon graduating, Jones plans to apply to pharmacy school while continuing to work with Specialty Athletic Training.

“Since Alex joined the basketball program, he has done nothing but think about others,” said Lewis & Clark men’s basketball head coach Dinari Foreman. “He works with everyone in our community, younger and older. All of the commitments he’s made embody why he has received this award.”

Jones has volunteered as a trainer and peer mentor with Specialty Athletic Training, which was founded by Ryan Lockard BA ’07. Additionally, Jones has been a student committee member for Lewis & Clark’s biology department and completed over 250 hours of research for Oregon Health & Science University. He also worked as a wellness coach for the Special Olympics, and as a tutor for the college’s Academic English Studies program, which provides courses for non-native English speakers to develop academic English and intercultural competency.

“Our clients have loved his positive attitude and outgoing personality,” said Lockard. “He has been able to easily relate to our clients and always have them leaving their training sessions with a smile on their face.”

Over his competitive career, Jones played in 64 games and scored over 350 points. Jones is the second Lewis & Clark student-athlete to win a seasonal Play It Forward Award. Deion Mock BA ’16, who competed in football and men’s track and field, was named the recipient in March 2016.

The Play It Forward Award was created in 2015 to recognize student-athletes who are inspirational role models in their community. In partnership with Nike and Providence Health & Services, the award recognizes two college and two high school student-athletes following the fall, winter, and spring sports seasons. All awardees for the year will be eligible for the annual Play It Forward Award and Scholarship, to be announced in June.