An Entrepreneurial Approach to Environmental Justice

Ever since she was a kid in San Rafael, California, Frances Swanson ’17 has been concerned about environmental issues. Once at Lewis & Clark, Swanson decided to major in environmental studies.

“Lewis & Clark’s program is really unique,” she says. “It’s all about rethinking preconceptions about what’s eco-friendly. My classes have taught me to think critically about my intentions and the impact of my actions.”

Swanson also credits her experience as a Division III student-athlete in track and field and cross country as an important motivator and outlet. Upon completing her senior season, Swanson picked up two awards at “The ELCYs”—the Mary Hunter Female Multi-Sport Athlete of the Year and the Judy McMullen Female Scholar-Athlete of the Year.

Her academic and athletic experiences together have given her a sound foundation for real-life environmental problem-solving, both overseas and in Portland.

In spring 2015, Swanson participated in the college’s overseas study program to the west African nation of Senegal. There, she and fellow students undertook a project to help local women build out their innovative and sustainable oyster-harvesting operation. Shortly after returning from Senegal, Swanson was ready to start another project. 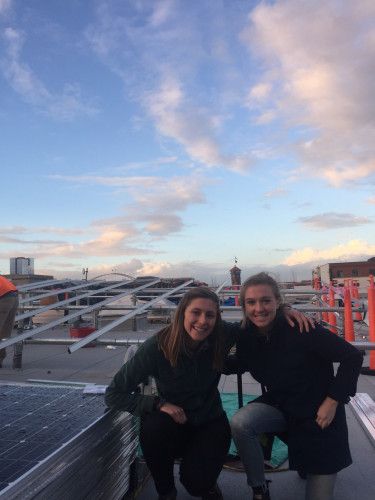 She and Kori Groenveld ’18, a fellow environmental studies major and cross country team member, attended a brainstorming meeting held by the college’s Entrepreneurship Club about how to use Lewis & Clark’s Renewable Energy Fee Fund (REFF). The money is earmarked for projects that are student led, grounded in renewable energy, and designed to give back to the student body.

“In one of our classes, we were reading a critique of colleges and universities being ‘sustainable islands,’” she says. “We very much wanted to challenge the notion of isolated pockets of renewable energy infrastructure.”

Swanson and Groenveld set out to show how environmental sustainability and social justice are connected. They proposed an idea that would help combat gentrification and the unequal distribution of sustainable infrastructure in Portland. “Sustainable infrastructure can help propel gentrification,” explains Swanson. “It raises housing prices because it’s something people want in their homes.”

Reflecting on her college career, Swanson says it’s really the people at Lewis & Clark who have enabled her to do so much. “I think it’s the connections you make with other people—the ones pushing you to do your best—that make Lewis & Clark special.”

This story was written by Samantha Pratt ’20.