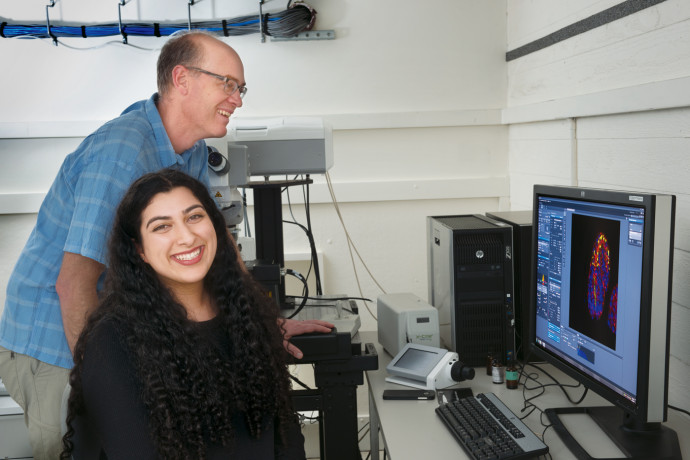 Simran Handa BA ’19 works with Greg Hermann, professor of biology and department chair, on his cell biology research. Handa is one of several first-generation students participating in the college's Pathways to Success in STEM (science, technology, engineering, and math) program. (Robert Reynolds)

Simran Handa’s newlywed parents emigrated from their native India to the United States in the 1990s because they wanted their yet-to-be-born children to get the education they had missed.

Handa, who grew up in the Seattle area, knew she was expected to study hard and set her sights on a top college. She recognizes how hard her parents—who started out working as convenience store clerks and now own several 7-Elevens—strived to give her that opportunity. She says, “I owe everything to them.”

Thanks to a Lewis & Clark initiative aimed at supporting the success of first-generation college students, she is not only meeting her parents’ expectations but also her own. Handa, a junior biochemistry and molecular biology major, works in a research lab with Greg Hermann, professor of biology and department chair. Together, they do research with C. elegans, a millimeter-long worm that is considered by many to be one of the best models for studying how a fertilized egg develops into a complex multicellular animal.

Part of her work involves using a powerful laser-scanning confocal microscope. “It definitely isn’t common for an undergraduate to have access to such an expensive piece of equipment,” says Handa, who hopes to one day herself become a medical researcher and a mentor to younger scientists. “Actually getting to see and do the things most students just read about in a textbook is an amazing opportunity.”

Handa is a participant in Lewis & Clark Pathways to Success in STEM (science, technology, engineering, and math), a multifaceted program that helps first-generation college students realize their full potential. Now in its second year, funded by a three-year anonymous foundation grant, the program is gaining momentum and creating new cohorts of successful STEM students.

About 13 percent of Lewis & Clark undergraduates are the first members of their families to attend college—that translates to about 70 students a year, many from low-income and underrepresented-minority backgrounds. At Lewis & Clark, about 1 in 5 incoming first-generation students expresses interest in studying science or math, and 3 out of 5 of those students earn a degree in those subjects.

“We are trying to create an environment where every student interested in science gets the chance to succeed,” says biologist Paulette Bierzychudek, the William Swindells Sr. Professor of Natural Sciences and cochair of Pathways.

For first-generation students, just getting into a college can appear daunting if their families lack prior personal experience with the ins and outs of admissions and financial aid. Once they arrive on campus, they encounter another set of challenges. Moving away from home can be a culture shock for any student, but more so for someone who has few reference points for what it’s like to go to college. These students may feel marginalized because they don’t share the same formative experiences as their more well-heeled peers. They may struggle academically because they attended high schools that come up short in resources and/or rigor.

“I didn’t get anywhere near science equipment in high school,” says Sarai Miranda BA ’20, a Los Angeles native considering a chemistry major. “There are students here who grew up with everything they needed to do well—tutoring, private schools—and you wonder if you can reach that same level. I had a fear I was the only one who didn’t always understand what was going on in class.”

At the same time, first-generation students often contend with the pressure of expectations back home, where their families—and even their communities—are counting on them to succeed.

“As a first-generation student, you always want to make your parents proud,” says Yuriy Popovich BA ’20, who moved to Oregon with his family from their native Ukraine when he was 5 years old. “I want to show them it was worth coming to America.”

For first-generation students interested in studying science or math, such challenges may seem overwhelming, especially given the intense, sink-or-swim reputation of those disciplines.

“There used to be this fallacious mindset that viewed some of these introductory courses in chemistry or biology as gateways, and that we needed to guard the gate,” says Professor and Chair of Chemistry Julio de Paula, a past dean of the College of Arts and Sciences and Pathways cochair. He notes, “I would rather see the gate opening wider, not closing. In fact, I would like to remove the gate.”

A cornerstone of the Pathways program is the faculty-student research component. First-generation students are paired with STEM professors who serve as their mentors. The students get paid from work-study funds to collaborate with them on a range of projects, from studying addiction in fruit flies to developing cybersecurity programs to analyzing spectral geometry.

Bierzychudek says it’s very unusual for first-year students to work alongside faculty researchers. “In most liberal arts colleges, students work with faculty members later in their college experience— and at large research universities, these experiences are often reserved for graduate students.” She says the goals of the experience are for students to develop a personal relationship with a faculty member outside the classroom and to help develop a student’s “scientific identity” early. “We want our students to think of themselves as scientists from the very beginning of their college careers,” she says.

Her faculty cochair agrees. “I know from personal experience that an early introduction to meaningful research opportunities can really help students cement their interest in science,” de Paula says. “There is a talent for discovery you only see when you take students out of the classroom and put them into the lab.”

“I told Professor Binford I was looking for a mentor, someone to look up to in the field, and she was like, ‘Yes, I can do that,’” Miranda says. “I’ve spent time with her, and we’ve talked about all sorts of things, including things that don’t really have to do with academics.”

Miranda says Pathways has helped her gain in confidence over the course of her first year. “I’m excited for the future,” she says. “I feel like I can accomplish anything I put my mind to.” 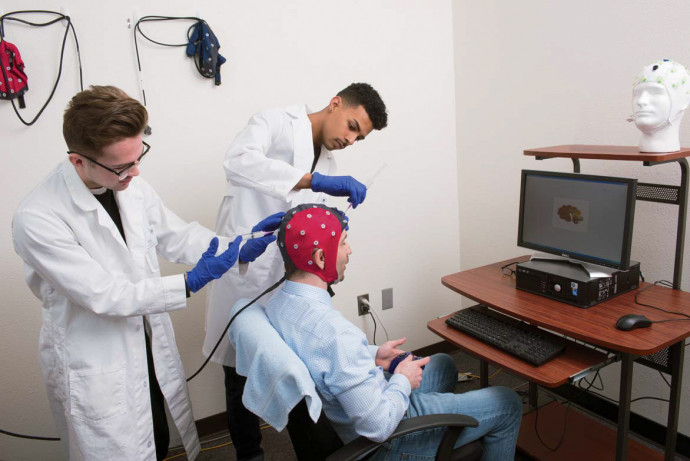 For de Paula and Bierzychudek, the program carries personal significance: both were first-generation college students themselves. Bierzychudek grew up in a working-class neighborhood in Chicago and went on to earn diplomas from the University of Washington and Cornell. De Paula was born in Brazil and immigrated with his family to New Jersey as a teenager speaking no English, and went on to earn degrees from Rutgers and Yale.

“I’ve never forgotten where I came from,” de Paula says. “It has always been important to me to make sure first-generation students get the proper support to succeed. When you admit a student, you have a moral obligation to do what you can to help make their dream a reality.”

Students such as Simran Handa, well on her way to graduation and a great career, are eager to start giving back to others too. “The success of my peers is really important to me,” she says. “I hope I can always be a mentor to first- generation students, starting right here at Lewis & Clark.”