Painting the ‘Yin and Yang of Nature’

In her art studio on Martha’s Vineyard, Jessica Pisano pauses to study a painting in progress.

Light streams in from high, narrow windows in the 1,100-square-foot haven she helped design. Her dog, Sienna, tugs at her apron strings.

“Lighting is paramount,” she says. “High windows also give me wall space to hang my paintings.”

Pisano is a passionate award-winning artist whose work is inspired by the natural beauty of the island. She’s had numerous solo and group showings, and her paintings are widely held in both private and public collections around the world. She studied fine art at the Lorenzo de Medici School in Florence, Italy, and earned a BA in art at Lewis & Clark and an MA in arts administration at the School of the Art Institute of Chicago.

“Birds and trees are my primary subjects,” she says. “Delicate and light, birds epitomize mobility and freedom. Trees are the opposite: strong and majestic, they represent stability and growth. I’m drawn to that balance, to the yin and yang of nature.”

Pisano’s work reflects her vision, melding traditional techniques of the old masters like Caravaggio, Michelangelo, and Botticelli with an intuitive modern style.

“I start with a loose background, working with large brushes and other tools to keep the paint flowing in an energetic way,” she says. “Then I get detailed, underpainting the main subject in burnt or raw umber oil paint before adding color.” The process can involve 40 layers and a final varnish for protection.

Growing up on Martha’s Vineyard, Pisano and her two sisters were free-roaming children—their mother opened the door in the morning and sent them out to explore the woods, jump over streams, and collect rocks and twigs before heading to the beach. “Nature has always been my form of meditation,” she says. “It balances me and brings our crazy world into perspective.”

Creativity, Pisano says, is in her DNA. Her mother was an artist, her father a writer, and her grandfather a sculptor. When it came time to select a college, she wanted to spread her wings and explore. While visiting her aunt in Portland, she toured Lewis & Clark and was immediately captivated by the visual beauty of the campus.

“I wasn’t 100 percent sure I wanted to pursue art as a career,” says Pisano, who was also interested in nature conservation. “I felt a liberal arts school would give me more balance.” 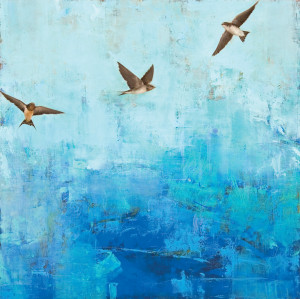 Orion's Belt, Pisano's favorite painting (oil, 48 x 48 inches).Pisano continued to grow creatively while exploring her options. She studied photography with Robert Miller, senior lecturer in art and studio head of photography, and pursued her interest in drawing and painting. She began to experiment, adding watercolor and acrylic paints on top of black-and-white photographs before moving on to the “luscious beauty of oil painting.”

Near the end of her sophomore year, Pisano’s advanced drawing teacher—a visiting professor—pulled her aside for a game-changing conversation. “He gave me the confidence to become a professional artist,” she says.

The following year, Pisano—whose grandparents emigrated to the U.S. from Italy—was eager to study abroad in Florence. “That year in Florence was like living in a dream,” she says. “I spent my days painting, drawing, and sculpting in beautiful Renaissance-style courtyard studios and visiting amazing museums.”

In her island studio, Pisano often gets lost in her work until the sunlight fades. When asked about her favorite painting, she describes Orion’s Belt. Its genesis stems from late night trips to the beach, stargazing with her father and two sisters. Three birds in the painting mirror the three-star belt in the constellation Orion.

“I love watching a piece develop over time, unfolding as I paint,” she says. “It stirs the joy of discovery I felt as a child exploring in the woods.”