Lewis & Clark Selects Wim Wiewel as Its Next President 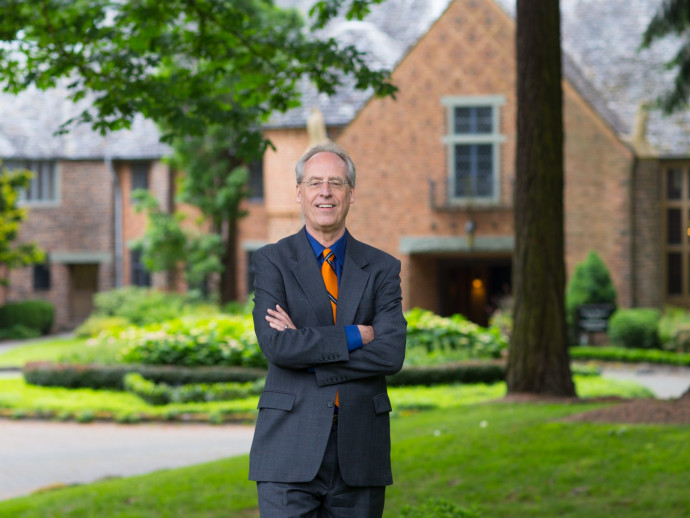 Lewis & Clark has selected Wim Wiewel (pronounced Vim VEE-vel) to lead the institution forward as its next president. Wiewel, who has just completed a nine-year run as president of Portland State University, will start in his new role on October 1. The search committee noted the strength of Wiewel’s relationships in Portland and across the Pacific Northwest and his commitment to the power of the liberal arts as leading factors in their decision.

“I think it’s fair to say that there has never been a greater need for critical thinkers in society than right now, when facts, truth, and objective reality are under assault,” said incoming president Wiewel. “I’m incredibly energized by the opportunity to lead Lewis & Clark, an institution so demonstrably committed to producing smart, engaged, critically thinking citizens of the world. Lewis & Clark is an important part of what makes Portland great, and I look forward to leveraging the strength of our city and region as partners in the vital work ahead.”

In nearly a decade as president of Portland State University, Wiewel guided the school through the Great Recession and into a dramatic period of growth and independence. During his time at PSU, Wiewel focused on five strategic goals: elevating student success; advancing excellence in teaching and research; extending leadership in community engagement; expanding commitment to equity; and innovating for long-term stability. Wiewel tripled fundraising, greatly increased the diversity of the student body, and was instrumental in the renovation or construction of ten major buildings. His achievements attracted the attention of the presidential search committee co-chaired by trustee and prominent Portland attorney Jay Waldron of Schwabe, Williamson and Wyatt, and Jon Jaqua BS ’70, trustee and owner and manager of McKenzie Oaks Ranch and owner and partner of Metal Products Company.

“We couldn’t be happier to have found the right leader close to home in Wim,” said Waldron. “In an era of increased competition for students, faculty, and donors, there is great opportunity for liberal arts colleges, law schools, and graduate schools like ours to benefit from strong and proven leadership. We’re confident his blend of experience, energy, and vision will lead Lewis & Clark to even greater levels of success.”

Wiewel holds degrees in sociology and urban planning from the University of Amsterdam and a PhD in sociology from Northwestern University. Prior to leading Portland State, he was provost and senior vice president of academic affairs at the University of Baltimore, where he led efforts to broaden the university’s role in the city’s revitalization. Previously, he was dean of the College of Business Administration and the College of Urban Planning and Public Affairs at the University of Illinois at Chicago, where he helped establish the Great Cities Program. Wiewel is a nationally recognized expert in urban planning and in the way institutions of higher education strengthen their home cities.

A U.S. citizen and native of the Netherlands, Wiewel is married to Alice Wiewel, Oregon’s state architect. Together they have four children.

Lewis & Clark began its search for a new president earlier this spring. In March, the Board of Trustees appointed a search committee that was assisted by a professional search firm.

Vice President, Secretary, and General Counsel David Ellis has served as interim president since January and will continue to serve in that role until Wiewel starts in October. Board Chair Scott Dubchansky said the trustees and the entire community are deeply indebted to Ellis for his dedication to Lewis & Clark.

“David has served at the institution for over 15 years and, as many of you know, was planning to retire this spring,” Dubchansky said. “We’re thankful he took on this new role, and he has done a tremendous job as interim president. He will be a valuable asset to Wim as we move through this leadership transition.”

Over the recent weeks Wim Wiewel has met with the presidential search committee, trustees, and Executive Council. Additionally, in on-campus presentations from May 16 to 19, he met faculty, staff, and students from all three schools in groups that totaled more than 500 individuals.

Life Trustee and Former Board Chair