On October 25, hundreds of local business and civic leaders will attend the Oregon Entrepreneurs Network’s 24th annual Tom Holce Entrepreneurship Awards Dinner, or as they refer to it, “the Oscars, but with less glam and more grit.” Guests will look on as OEN names the winner of the Wyatt Starnes Battle of the School Award that recognizes young leaders committed to improving the world through entrepreneurship. This award, given to one young entrepreneur each year, celebrates willingness to pursue a major goal, push boundaries, and work toward creating positive change.

One of those entrepreneurs is chemistry major and Pamplin Fellow Max Clary ’18, who has applied his passion for social justice to an array of projects. Clary was nominated for the award by Professor of Law Samir Parikh, who is the Kenneth H. Pierce Faculty Fellow and director of Lewis & Clark’s Center for Entrepreneurship.

“When my mother passed away, I became more involved with social issues,” Max explains. “As I worked with my high school on my early projects, I realized that not only did I have the power to make an impact in my life personally, I could make a tangible impact on the world as well. My current work in social entrepreneurship stems from these challenging experiences: I am always looking for ways to contribute to a better global community.”

Clary became involved in social entrepreneurship as a junior in high school, when he worked with the anti-sex trafficking organization Prajwala. After coming to Lewis & Clark, Clary became involved with the college’s Amnesty International chapter. In 2014, he cofounded the organization KareMeKuc, which means “season of peace” in the Northern Ugandan Lango dialect. The venture’s mission is rehabilitating child soldiers and their families through agricultural training. While at Lewis & Clark, Clary visited Uganda twice, strengthening the organization’s relationship with over a dozen other NGOs. 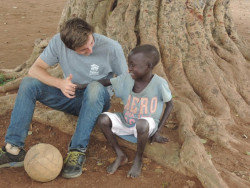 In 2017, Clary and his cofounders Seren Villwock ’19 and Nellie Trenga-Schein ’17 were recipients of a 100 Projects for Peace grant to further develop KareMeKuc’s programs to combat food insecurity in Uganda. Founded by philanthropist, scholar, and world traveler Katherine W. Davis, the $10,000 Projects for Peace grants have been used to fund previous projects at Lewis & Clark addressing a diverse range of challenges, including providing sexual health education in Nicaragua, and improving quality of life in China through motorcycle repair.

KareMeKuc isn’t Clary’s only social entrepreneurship endeavor: in 2015, he began working with Professor of Chemistry Julio De Paula to develop photocatalytic clay disks which can be used to purify water in developing countries. Over the past two years, the team has collaborated with the art department and is developing a more cost-effective photocatalytic substitute which can be used easily by those in developing countries.

Whatever happens with the OEN award, Clary is already looking toward the future: he will graduate in the spring and is planning to work with Children of Peace Uganda to pursue his vision of building a Peace Center in Northern Uganda. As he develops the projects he has spent his time at Lewis & Clark working to build, his collaborations with professors and fellow students will continue to impact the work he does.

“The support from professors, friends, and community members around Lewis & Clark has been unbelievable,” said Clary. “This work could not be done without them.”

This story was written by Emily Price ’18.