Finding Harmony in History and Jazz

On a muggy afternoon in the French Quarter of New Orleans, Charles Chamberlain hands out bottled water and paper fans to tourists on his Roots of Jazz walking tour. He regales the group with tales of the city’s early jazz venues and musicians, including Jelly Roll Morton, Joe “King” Oliver, Kid Ory, and Louis Armstrong. Along the way, he plays authentic recorded music samples, ending the tour at the Little Gem Saloon for dinner and a live jazz performance.

Chamberlain, who has a PhD in U.S. history from Tulane University, teaches at the University of New Orleans and heads Historia, an independent consulting firm that specializes in providing quality historical content and museum services. In 2013, he opened Rock ‘n’ Nola Tours, merging his passions for history and music.

Chamberlain fell in love with New Orleans during graduate school. “I decided to stay and build a career here any way I could.”

His museum work includes two large-scale projects with the Louisiana State Museum. The first was in Baton Rouge, the museum’s flagship location. He helped develop exhibits on such diverse topics as slavery, civil rights, the Louisiana Purchase, regional music, and the area’s natural resources. 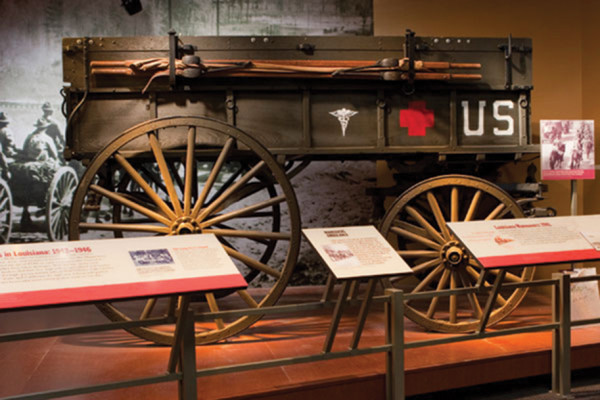 Later, he worked at the state museum in Natchitoches, where he produced exhibits on Louisiana sports and regional history. “I gathered a diverse group of people as an advisory council to create exhibits that weren’t merely my version of Natchitoches history,” he says. “I’m proud of that collaboration.”

Over the years, Chamberlain has also consulted on film and TV projects, finding those jobs mainly through word of mouth. He was a technical advisor on Abraham Lincoln: Vampire Hunter and is credited as a historian for “Treme: Beyond Bourbon Street,” a behind-the-scenes look at the popular HBO series.

Chamberlain grew up in Houston and attended high school in Austin. When it came time for college, he wanted a change of scenery. “In the early ’80s, Lewis & Clark seemed like the last frontier to me,” he says. “I learned to navigate a whole new culture and was blown away by the beauty of Oregon—from the coast to the mountains to the Gorge and high desert.”

A self-taught jazz musician, he majored in music and intended to play guitar professionally. After his first year at Lewis & Clark, he assessed the competition and decided to study history as well. “I had no idea my career would end up encompassing both professions,” he says. “My senior thesis was on the history of New Orleans jazz and improvisation.”

Chamberlain didn’t study overseas but says his history classes provided a broad subtext that made him feel as if he’d traveled the world historically. Studying classical jazz expanded his perspective of music, as did participating in gamelan music and the wind ensemble. And then there was Squalor, the eclectic dance band he played with on campus for fun and local fame.

Nowadays, Chamberlain plays guitar with the New Leviathan Oriental Fox-Trot Orchestra, which performs jazz-based popular music from the 1890s through the early 1930s. Over the summer, he traveled to Rome and taught an overseas study course through the University of New Orleans. The class examined ways to preserve and restate the past by studying Rome as a public museum.

“I love challenging myself to try new things and to learn new skills, especially since technology and digital history are changing so fast,” he says. “With me, it’s all about lifestyle over riches.”