Assistant Professor of Biology Margaret Metz and her research team are featured in the latest issue of the journal Nature, an international science publication focused on ecology and environmental studies. Of the faculty who contributed to the article, Metz is the team’s only researcher from an undergraduate institution, and her work has played an integral part in a study spanning 15 years and reaching from the Equator to the Arctic.

Since 2002, Metz has traveled each year to Yasuní National Park in Ecuador to answer what seems to be a simple question: why are tropical forests home to many more species of tree than colder climates? Her team approached this problem by exploring the storage effect, an ecological mechanism that allows plants with specific resource requirements to be more successful when they grow near species that need different resources to survive. Studying seed production in 10 different forests, the team determined that the storage effect acts more strongly at the Equator, meaning that species coexistence is directly linked to a forest’s latitude. 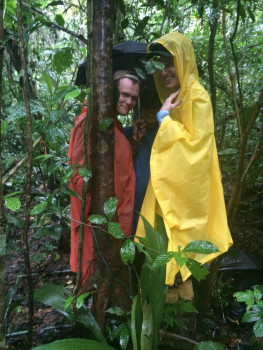 For the past three years, Metz has brought a team of Lewis & Clark students with her to Yasuní, giving them the opportunity to conduct fieldwork on seedling strategies that maintain plant diversity. In a post on Metz’s lab site, Ina Waring-Enriquez BA ’17 outlines an average day of research: “As the day progresses we move through the forest, stopping at marked plots each containing seedlings that have been annually marked and measured. At each plot we set up the camera to snap photos. At 1 p.m., after a long, hard day of fieldwork, we all make our way out of the dense forest buzzing with life back to the station, eager for lunch.”

In a press release from the Smithsonian, S. Joseph Wright, the study’s coauthor, describes the vast differences between the forests the research team studied: “On the equator at Yasuní, Ecuador, several hundred tree species flower each month. A harsh weather anomaly in any particular month affects flowering in a small percentage of the species. In contrast, just below the Arctic Circle at Bonanza Creek, Alaska, tree reproduction is limited to June, July, and August, and a harsh June impacts all species, and when one species has a successful year, so do others.”

Students have credited Metz’s lab with helping them to explore possible career paths firsthand, as well as get research experience they would not receive anywhere else. The project was funded by a grant from the National Science Foundation as well as the Rogers Summer Science Research Program, which gives students the opportunity to delve into advanced scientific work by funding student-faculty collaboration. As Metz and her students finish their research from this summer, she is looking forward to continuing her work, possibly at a new field site.

“There is a site at Wind River near Carson, Washington, where I have a new grant that is also looking at seedling dynamics, forest diversity, and forest regeneration,” Metz says. “It’s not too far from the Eagle Creek fire, so perhaps it can provide a lens to understanding old growth forest dynamics.”

This story was written by Emily Price ’18.