When first-year placekicker Obed Eriza’s 33-yard field goal went through the south uprights at Griswold Stadium on September 30—sealing Lewis & Clark’s 24-21 win over Willamette —the Pioneers launched a frantic search for one of the most prized possessions in Oregon small-college athletics: the Wagon Wheel.

The Pioneers soon located the wheel, hoisting it high over their heads as they walked back onto the field to cheering fans.

A traveling trophy between Lewis & Clark and Willamette, the Wagon Wheel is awarded to the winner of the annual Northwest Conference game between the two schools. The tradition began in 1949 and was created by the Blue Key men’s honor society. Each year, the score of the most recently played game is engraved on a plaque in the middle of the wheel.

Prior to September’s victory, the Pios hadn’t won the Wagon Wheel since 2000. The victory was especially meaningful to Lewis & Clark’s 11 seniors, 10 of whom had competed for four years without winning a home game. A week after snapping a 33-game losing streak with a 40-29 win at Pomona-Pitzer, Lewis & Clark defeated Willamette, marking the first back-to-back victories and first home win for the Pios since 2012.

Next year, head coach Jay Locey, who led the Pioneers to a multiwin season for just the ninth time in the last 20 years (and the first since 2012), will be working hard with his team to win the Wagon Wheel for a second consecutive season, an event that hasn’t happened since 1991–92. 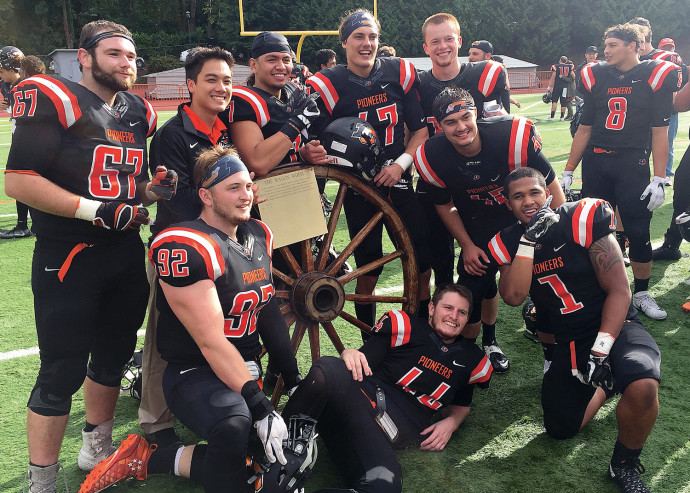