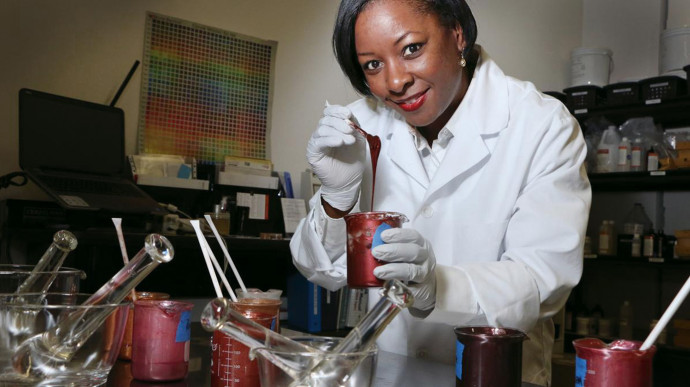 Lewis & Clark Trustee Paula Hayes BA ’92 has been named a recipient of a 2017 Portland Business Journal Small Business Innovation Award for her cosmetics company Hue Noir, which specializes in developing makeup designed for women of color. Although it offers lipstick, eyeshadow, and foundation for a variety of skin tones, Hue Noir’s primary goal is to serve darker-skinned women, who have traditionally been left out of the beauty products marketplace.

“The sooner you can expose students in a liberal arts setting to some of the ideas behind business and entrepreneurship, the sooner they can start putting together the pieces of the puzzle,” said Hayes at a workshop of Lewis & Clark’s Bates Center for Entrepreneurship and Leadership. “I would encourage students to go for it—whether that’s becoming an integral part of a wonderful business that’s already established or becoming the catalyst for a great new idea in a for-profit or nonprofit. Nothing that’s worth doing comes easy.”

In 2015, Hayes received the college’s Pioneer Alumni Leadership Award, given to an alum who displays extraordinary leadership and demonstrates exceptional service to the college. She has served on Lewis & Clark’s Board of Alumni and has volunteered with the Office of Admissions and the Office of Inclusion and Multicultural Engagement.