What’s the first thing you put on in the morning? Hopefully, it’s clean underwear.

But while interning at a downtown homeless shelter in 2015, recent alumna Paige Sanders BA ’18 and senior sociology and anthropology major Ashley Garber saw that Portland’s homeless women didn’t have access to the critically important, and often overlooked, necessity of clean undergarments. And thus, the Portland Panty Project was born: a nonprofit organization that “aims to provide 1,000 homeless women with two pairs of underwear and one bra apiece.” 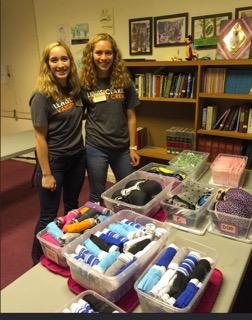 “It is socially unacceptable and unhealthy for women to go without clean undergarments, yet many homeless women and women in need are unable to afford these necessities,” says Garber, who is also pursuing a gender studies minor. “Paige and I noticed a lack of size-appropriate undergarments while working as interns at Operation Nightwatch, a homeless hospitality center.”

In 2017, the brainchild of Sanders and Garber officially came into its own as a certified nonprofit organization. This was a significant achievement for the Portland Panty Project—as a federally recognized nonprofit organization, it can gain valuable legitimacy in the legal and financial worlds, and, most importantly, is eligible for government grants that allow Sanders and Garber to continue their mission.

“This segment of the homeless population is, perhaps surprisingly, among the most neglected,” explains Gary Davis, former executive director of Operation Nightwatch and the first supporter of the Portland Panty Project. “While there are a number of programs for homeless youth, adult men, and women with children, single women are a group few seem to think of.” 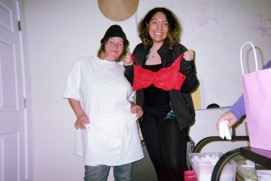 LC student and volunteer Natalie Cerda next to a recipient at a PPP distribution.Since 2015, the project’s founders have raised over $7,000 through a GoFundMe campaign. This, in addition to donations by local lingerie retailers, has helped Sanders and Garber achieve their mission. But they’re not done yet: as Garber told The Oregonian, “in an ideal world, we would have $500 a month to spend on the women we serve.”

In 2016, both Sanders and Garber were recipients of Lewis & Clark’s Student Leadership and Service Outstanding Undergraduate Service Award. Additionally, the Portland Panty Project was featured in The Oregonian and ranked in Willamette Week’s “Best Of Portland” 2017 listing. The organization’s L&C student volunteers were also interviewed by Portland’s NBC affiliate KGW.

“Though [Garber and Sanders] sought my guidance as to how to run such a campaign, this has been totally their initiative and they’re the ones investing all their energies into it,” said Davis. “I’m proud of them and they’re also doing Lewis & Clark proud.”

This story was written by Mara Sleeter BA ’19.