The State Library of Oregon has awarded Lewis & Clark a $30,100 competitive grant in support of the first year of a multi-year project entitled “Vietnamese Portland: Memory, History, Community”. Supported with funds from the Institute of Museum and Library Services (IMLS) and the Library Services and Technology Act (LSTA), this project will be led by Hannah Crummé, Head of Watzek Library Special Collections and College Archivist.

Just over 100 years have passed since the Immigration Act of 1917, the first piece of legislation designed to restrict migration from Southeast Asia to the United States. Today, Vietnamese Americans make up nearly two percent of Portland’s population, but the unique and complex history of their community has been largely overlooked in wider narratives about the city. A team of librarians and archivists from Lewis & Clark’s Special Collections hopes to change that: this winter they began conducting a series of oral interviews with members of the local Vietnamese community, with the ultimate goal of building an archive documenting the experiences of Vietnamese Americans in order to better understand Portland’s urban landscape.

“Portland has acquired a reputation for homogeneity, which is true statistically but also belies the very real and increasing diversity of its population,” said E.J. Carter, special collections and archives librarian. “This project is an attempt to create a more inclusive history of the city by letting people of Vietnamese descent across various walks of life tell their stories.”

The team plans to conduct about 12 interviews each year for the next 5 years and will publish digital recordings and transcripts of these oral histories on the Special Collections website. The recordings will be accompanied by documents, photographs, and ephemera donated by members of the community, including diaries, photo albums, and church or temple documents.  While the ultimate goal is to preserve records relating to the Vietnamese community, the exhibit will also enhance the curriculum at Lewis & Clark. 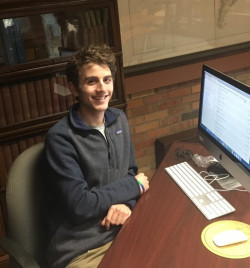 “More than anything, I’m excited to participate in illuminating a part of Oregon history that’s not widely known,” Jaffe said. “Our college has a never-ending catalog of how people like Meriwether Lewis and William Clark contributed to Oregon’s history, but it is so much richer than that.”

“[Our office] is committed to creating learning and research opportunities for students,” said Crummé. “This effort is not only about making sure that the history of the Vietnamese community is recorded for posterity, but this is also an opportunity for Lewis & Clark students to get experience in the field.”

Over the next five years, Special Collections will train more student workers for the project, host events promoting the project to local libraries and schools, and hire a translator to facilitate communication with some of the older members of the Vietnamese American community.

“The most interesting part of the project is just hearing these incredible stories,” said Carter. “People tell us about their experience of the war, about their often dramatic flight from Vietnam after the North took over the South, and about the struggle to establish a new life in the Portland area. It’s really an honor to listen to these often painful experiences in such detail.”

Crummé agrees. “Historically, as today, archives represent the collecting priorities of the people in power. Now, across the country and around the world, more and more archives are working to record our moment and the 20th century in all its diversity. This all betters our understanding of how Portland developed and why we are, as a city, the way that we are today.”

This is the college’s third competitive LSTA grant, the first two (2009 and 2010, respectively), were awarded in support of the Library’s Oregon Poetic Voices project.