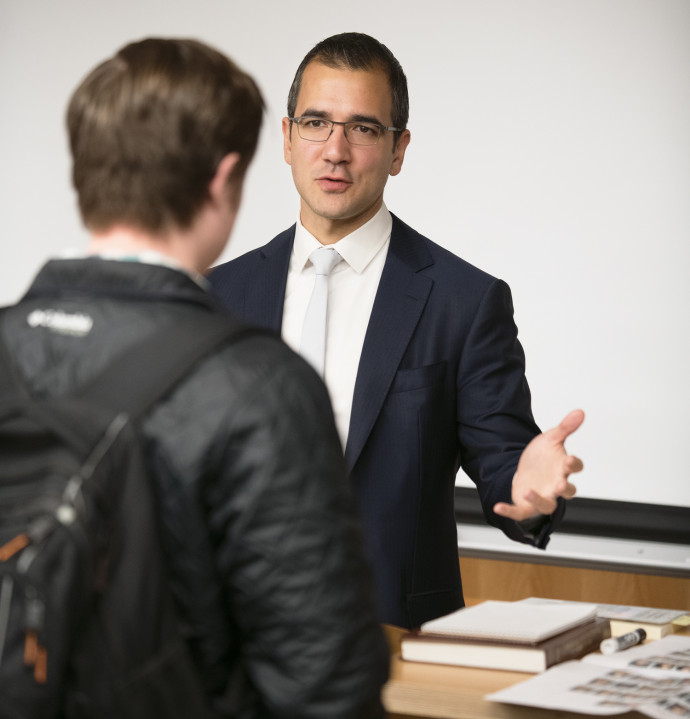 Third-year law student Justine Bonner is accustomed to courses that involve reading reams of judicial opinions, memorizing a mountain of case laws, and sweating through a high-stakes final exam.

But last fall, in her Comparative Constitutional Law class, taught by Professor Ozan Varol, she and her classmates faced an assignment like no other:

Congratulations! You’ve just won the election to become the 46th President of the United States. … Please devise a plan of action for destroying constitutional democracy in the United States and creating an authoritarian government, with your party at the helm.

“I remember thinking, ‘This is impossible,’” says Bonner, a Los Angeles native and former eighth-grade history teacher. “The task seemed too large and complex. But I reminded myself that I took the class because it departed from the traditional law school model.”

Varol, a widely published scholar of constitutional transitions and design, devised the assignment while exploring ways to refashion his Comparative Constitutional Law course, which he’d taught twice since joining the law school faculty in 2012. The class explores the varying structures of constitutional systems around the world and the consequences of those differences.

“The first two times I taught the class, students would read cases on their own and then we’d discuss them in class,” says Varol. This time, however, he wanted to experiment with ways to put greater emphasis on developing students’ critical thinking skills.

He’d recently read about an exercise in which the CEO of Merck asked his executive team to assume the identity of a rival pharmaceutical company and figure out ways to put Merck out of business—then figure out ways Merck could defend itself against these threats.

“I thought it would be fun to create a version that applied to killing American democracy rather than killing Merck,” Varol says with a laugh. He continues, “I thought it was a really valuable exercise to spur innovative thinking. Because in any context—politics, law, business—the status quo is a really powerful magnet and to create change is difficult.”

Varol’s 25 students began the semester by examining the basic ingredients of a constitution—judicial review, federalism, checks and balances, and the like—before diving into specific case studies. The constitutions of Portugal, Korea, and Colombia shed light on the concept of judicial review. The Arab Spring and the Egyptian revolution in 2012 served as a window into constitutional revolution. And Catalonia’s attempts to secede from Spain launched discussions of federalism.

The goal was to help students realize, yes, we do have a strong democratic heritage, but it is breakable.” Professor Ozan Varol

“We were learning about structural differences in constitutions and how that can affect what kinds of governments are created and what happens to a country,” says second-year law student Maddie Holmes of Portland.

Roughly half of the assignments involved working in small groups, the makeup of which changed each time. “In the real world, no lawyer works in isolation,” Varol explains. “You have to work with other people, so I think that’s a critical skill.”

In the two weeks leading up to the “Break the U.S. Constitution” exercise, the class studied authoritarian and semiauthoritarian constitutions using examples from China and Hungary. They also read some of Varol’s own work on “stealth authoritarianism,” a term he coined to encompass strategies used by dictators and democrats alike to implement authoritarian practices under the guise of democracy and rule of law.

“Stealth authoritarianism serves as a way to protect and entrench power when direct repression is not a viable option,” Varol wrote in a 2014 paper. “Stealth authoritarian practices use the law to entrench the status quo, insulate the incumbents from meaningful democratic challenges, and pave the way for the creation of a dominant-party or one-party state.”

Your mission will be accomplished if you can create a structure that makes it prohibitively difficult to unseat your political party from power. You’re welcome to use whatever mechanisms— legal, constitutional, and otherwise—you think would be useful to achieve your goal.”Professor Ozan Varol’s instructions to his Comparative Constitutional Law course

Varol expected students to use examples of stealth authoritarian tactics to devise a realistic plan to keep their party in power. “Your mission will be accomplished if you can create a structure that makes it prohibitively difficult to unseat your political party from power,” he told them. “You’re welcome to use whatever mechanisms—legal, constitutional, and otherwise—you think would be useful to achieve your goal.”

Adam Wolfe, a second-year law student from Boston, says his group of four “started by throwing out ideas we read about in other countries where the rule of law was subverted and asking, ‘Do we have this weakness too?’”

They brainstormed ideas, then each further researched one potential strategy. Wolfe investigated how to curb the power of an independent judiciary by limiting the purview of the federal courts. “Congress could make the Supreme Court a shell of itself,” he explains, “and then you’d have a lot less oversight over federal officials.”

Holmes’ group manufactured a voting-fraud scheme that they were able to blame on the opposition party. They then persuaded a friendly Congress to expand the definition of terrorism to include tampering with elections and began jailing political opponents.

“We were trying to consolidate power using the legal powers we already had, rather than using force, and then going from there,” says Holmes. “That’s what stealth authoritarianism is all about.”

Bonner’s group was one of several that proposed exploiting the existing powers granted to the executive branch by the USA Patriot Act and Foreign Intelligence Surveillance Court. They went one step further and undermined the Fourth Amendment protections against unwarranted search by cozying up to leading information technology firms—under the guise of helping improve the nation’s IT infrastructure—to acquire personal data and use it to quash opponents or achieve other political gain.

Another group, Varol recalls, slyly appointed an opposition lawmaker to a cabinet position, then cooked up a crisis within that person’s purview that required cracking down on dissent. They were one of several groups that manufactured a crisis or exploited an already-existing threat to jump-start the erosion of constitutional protections. “Basically, to break the Constitution there has to be a reason to erode people’s protections, to take away rights such as freedom of the press and other First Amendment protections,” explains Bonner. “For this to happen, your citizens cannot feel completely safe.”

Varol says he was “very impressed” by the students’ thoroughness and originality. “They used the existing strategies that foreign leaders are using as a starting point, but they not only adapted them to the U.S. context, they also expanded on them in creative ways.”

An Exercise in Critical Thinking

Students appreciated how the exercise sharpened their strategic thinking. “We had a lot of fun with it,” says Wolfe. “It’s a topic that I think many of us are thinking about these days because of what’s going on in the world.”

“You had to think very strategically about the little weaknesses hidden in the Constitution,” says Holmes, “which you don’t think about often, because obviously we don’t want the Constitution to fall apart.”

After realizing that breaking American democracy was, in Varol’s words, “hard but doable,” they switched sides. During the following week, they gathered in different small groups and came up with ways to counter the threats they’d identified, which was “the goal to begin with,” Varol explains. “The goal was to help students realize, yes, we do have a strong democratic heritage, but it is breakable. And since it is breakable, what do we do about it?”

We hold our constitution in a place of ultra reverence, but maybe we’re just lucky that it still stands.” Justine BonnerThird-Year Law Student

As a final, two-week assignment, the students simulated a constitutional convention. They were assigned groups representing different factions of a make-believe country that had just overthrown its dictator. Enthusiasm remained high. “People outside of class would talk about it and say things like, ‘We’ll trade you this constitutional provision for that provision,’” says Holmes.

Varol says he plans to tweak the assignments slightly before he teaches Comparative Constitutional Law again, but that he was very pleased with the outcome. “I warned students this would not be a traditional law school class, that they should treat this class as their constitutional law playground, to experiment with seemingly crazy ideas and see what works and what doesn’t,” he says. “I think they responded really well.”

Bonner says she “learned a ton,” and now better appreciates both the constitutional underpinnings of political events in foreign countries and the fragility of our own democratic foundations. “My rose- colored glasses were lifted a bit,” Bonner acknowledges. “We hold our constitution in a place of ultra reverence, but maybe we’re just lucky that it still stands.”

Dan Sadowsky is a video producer and editor based in Portland.