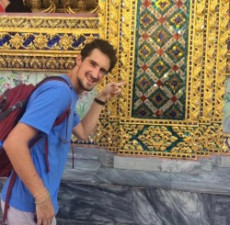 Caleb Diehl BA ’16 traveling overseas.For Caleb Diehl BA ’16, it was Lewis & Clark’s beautiful campus and reputation for rigorous academics via small classes that drew him west from his hometown of Park City, Utah. Diehl, who developed his journalistic capacities as a student reporter with the Pioneer Log, recently joined a trade mission to Thailand as a reporter for Oregon Business.

“The Pioneer Log is like a flight simulator for journalism,” Diehl explains. “It’s a very realistic experience of what you will encounter in a job, so get involved early, dedicate a lot of time to the paper, and don’t be afraid to report aggressively and make mistakes. It will pay off later.”

Lizzy Acker BA ’05, who grew up in Corvallis, Oregon, started her college journey at the University of Washington. After one year at UW, Acker transferred to Lewis & Clark as an English major. “I picked L&C because I liked the idea of a smaller school where I could take the classes I wanted to take (French, creative writing) and participate in a lot of activities like newspaper, the radio station, and soccer.” 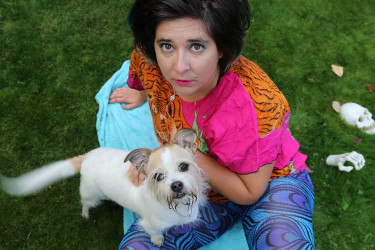 Now, as a general assignment reporter for The Oregonian/OregonLive, the state’s largest daily news outlet, Acker’s wide-ranging curiosity helps her deliver a variety of stories, from her first-person accounting of Portland’s new electric scooter initiative, to an initiative to track bias incidents in Oregon since the 2016 election.

Acker and Diehl join a coterie of accomplished alumni who started their journalism journeys on Palatine Hill, including Phillip McClellan BA ’91, international weekend editor at The New York Times, and Margaret Coker BA ’93, who took the helm as The New York Times’ Baghdad Bureau Chief in September 2017.

“Learn how to communicate through writing by taking classes that require a lot of writing—English, history, whatever,” suggests Acker. “Journalism is always changing and will not be the same in six months, let alone whenever you graduate, but being able to write is important no matter what. Write a lot, do hard things, be honest about your experiences, be nice to people, learn how to differentiate between constructive feedback and trolls, and don’t start smoking cigarettes.”

“If you’re determined to work in journalism today, Lewis & Clark will make you very employable,” says Diehl. “Both being a history major and working for the Pioneer Log proved to be excellent preparation for my current job. In fact, I pretty much do the exact same thing now that I did in college. It’s just that instead of ASLC meetings, I go to city council or the state legislature. History teaches you to evaluate sources, whether documents or people, with a critical eye. It makes you aware that everyone has an agenda. You need to bring the same scrutiny to double checking information in journalism that you bring to footnotes in a historical materials project.”