This spring, the Hoffman Gallery at Lewis & Clark is hosting an exhibition that poses contemporary questions about the effects of the global marketplace.

Opening January 21, What is a Trade? Donald Fels and Signboard Painters of South India, exhibits 16 large-scale paintings that explore trade and globalization in India.

“The topic of our global economy, should be on everyone’s mind right now, so the challenges this exhibition poses–what were and are the ramifications of global trade–are very current,” said Linda Tesner, director of the Hoffman Gallery.

Fels’ conceptual starting point for this exhibition was Portuguese explorer Vasco da Gama’s 1498 voyage to Malabar, India, in search of a direct sea route for the spice trade. In 2004 and 2005, Fels traveled to Kerala (formerly Malabar), India, as a Fulbright Senior Research Scholar, to work with local commercial signboard painters on a body of work examining globalization in India and exploring the historic and modern-day legacy of Vasco’s voyage.

“The imagery that constitutes the exhibition was conceived of by Washington artist Donald Fels, but executed by signboard painters in India,” Tesner said. “It is an example of a Western artist collaborating with craftsmen in South Asia, and it creates an interesting confluence of ‘high’ and ‘low’ art, from a stylistic point of view.” 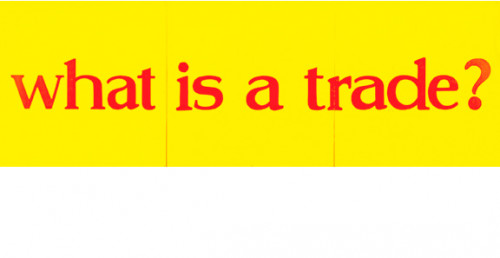 Donald Fels and his collaborators, What Is a Trade?, 2005. Oil enamel on aluminum, 4 × 12 feet. All images in this slideshow courtesy of the artists and Davidson Galleries, Seattle, Washington.

What is a Trade? Donald Fels and Signboard Painters of South India

A sampling of images that appear in the exhibition.
View full gallery

Most of the signboard painters had formerly worked as billboard painters—until recently, all billboards in India were hand-painted, but cheaper and more efficient inkjet printers are making the painters obsolete. In light of this trend, Fels and his collaborators created work in the style of traditional hand-painted billboards and Bollywood advertising. The bright colors and strong graphic narratives make visually arresting statements about the historic and contemporary effects of trade and globalization.

“I don’t think that the exhibition seeks to answer these questions or is in any way pedantic, but the imagery, text, and context do cause one to consider aspects of a global economy from another perspective,” Tesner said. “I hope that the exhibition will provide some interesting opportunities for academic departments on campus to explore these themes.”

Fels’ work is well known in the Portland area. In 2008, Fels unveiled a major new work in Portland’s Cathedral Park. Drawing on the River, a 40-foot-long steel structure, tells the story of the site underneath the majestic St. Johns Bridge, once a home to bustling industry.

In addition to his work as a Fulbright Fellow, Fels has twice received funding from the National Endowment for the Arts. His work has been shown at galleries and museums around the world, including the Penang Museum in Malaysia, Bologna’s Museum of Modern Art, Boston’s Institute for Contemporary Art, and the Seattle Art Museum.

“Though Donald Fels is a Northwest artist, this body of work took him to India and required a fairly intensive immersion in Indian culture and business practices,” Tesner said. “What Is a Trade? illustrates how regional artists are interfacing with a larger, more international community.”

Fels will offer a talk at 4 p.m. on January 21, immediately preceding the opening reception, which begins at 5 p.m. in the gallery.

“The Hoffman Gallery is full of deeply saturated, painterly graphic imagery–this exhibition is visually delightful!” Tesner said. “After giving over the Hoffman Gallery to the video installations of last semester’s Broadcast, these paintings are a beautiful contrast–and a nice antidote to a rainy winter day.”

The exhibition will be on display at the Ronna and Eric Hoffman Gallery of Contemporary Art from January 21 to March 14. The exhibit is free and open to the public; the gallery is open Tuesday through Sunday, 11 a.m. to 4 p.m.