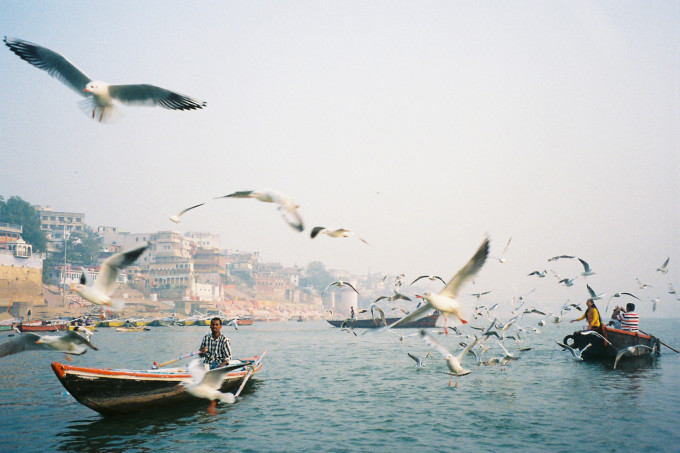 Out of more than 1,000 entries, Ella Bock BA ’19 won third place in The Washington Post’s Annual Travel Photo Contest. While participating in Lewis & Clark’s India regional area study program, she captured an extraordinary moment of birds in flight. The international affairs major chose India specifically for the opportunity to delve fully into another culture and to get out of her comfort zone.

“Studying abroad in India was incredibly rewarding. There were lots of challenges that we faced in order to find a new understanding and perspective of living, and studying, in India,” says Bock. The India program is known for academic inquiry, providing a deep analysis of the sociopolitical scene. Students immerse themselves in the Indian culture and engage with timely issues from human geography to women and the economy. 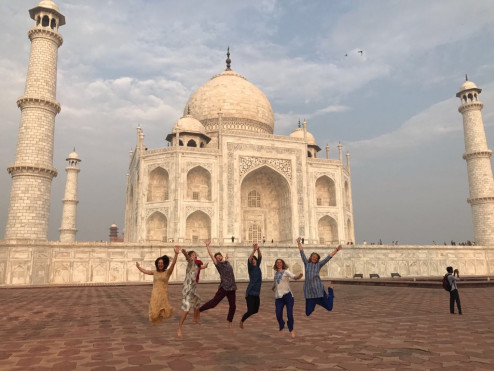 From left to right: Lily Dragon (BA '18), Morgan Clark-Gaynor (BA '19), Kara Marler (BA '19), Lila Winfrey (BA '19), and Sydni Brooks (BA '18).Finding India to be an unparalleled opportunity, Bock made great connections with both her Lewis & Clark peers and the family who hosted her. That relationship led to her spectacular photo.

“The day I took the photo I had gotten up early in order to arrive at the river with my host family around 7 a.m.,” Bock recalls. “We went out with lots of little crackers to throw in the water and feed the birds. Each time we did, the boat was swarmed by dozens of seagulls. It was fun, busy, and exciting, so I was taking lots of pictures, hoping to capture something worth keeping. Since I took the picture on my film camera, I didn’t see that particular shot until months later.”

Bock knew early on that international affairs was the major for her. She appreciates the interdisciplinary nature of the field, and enjoys investigating politics, history, and economics to understand how the world works. After taking a class on international political economics, she added a political economy minor to get a deeper understanding of the influence that social, political, and economic factors have on modern dilemmas.

Evelyn Newman BA '19 and Ella Bock BA '19Bock, who grew up in Bethesda, Maryland, says her family are regular readers of The Washington Post, and her father always encouraged her to submit photos to the contest. Despite this, she never considered entering until this year, when she felt she had a photo worth something.

“This picture is a reminder of a giggly and joyful moment that I got to share with an amazing family that had welcomed me into their home,” continues Bock. “The whole experience was so special and incredible.”

AdmissionsOverseas and Off Campus Programs