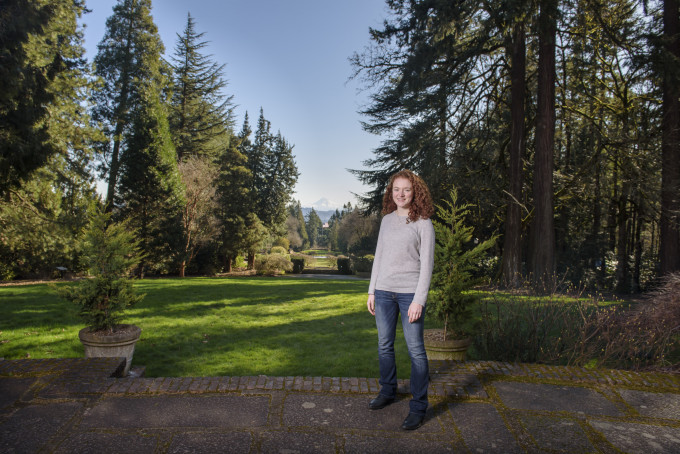 On November 18, the Rhodes Trust announced that Katie Kowal BA ’17 won a Rhodes Scholarship. She was a finalist this year for both the prestigious Rhodes and Marshall scholarships. She currently works in Washington, DC as a science policy fellow at the Science and Technology Policy Institute (STPI).

In her current role as fellow at STPI, Kowal uses knowledge garnered from her physics and political science double major to advise White House officials in the Office of Science and Technology Policy on the scientific research that should inform national policy. Much of her work includes translating technical scientific terms for policy makers.

“Some of my favorite projects have included informing policy to enhance infrastructure resilience to electromagnetic pulse hazards, and identifying challenges and opportunities to address challenges in the launch approval process for nuclear material,” Kowal said.

Kowal’s academic achievements were unparalleled during her time at the college. She double majored in physics and political science, created the Xplore program for first-generation college students in STEM, and won multiple awards including the Shannon T. O’Leary award for tremendous intellectual promise and community impact.

“Katie may in fact be the most decorated alumna we have ever graduated,” CAS Dean Bruce Suttmeier said. “Katie swept all of our major honors, including the Barbara Hirschi Neely Scholarship (full tuition for four years); the American Association of University Women Senior Woman Award, given to a woman graduate of outstanding scholarship, service, and character; and the Rena Ratte Award, the College’s highest academic honor given annually to a graduating senior.”

Along with her tremendous academic achievements, Kowal was also an accomplished varsity athlete.

“Katie finished her athletic career with marks that place her among the top ten all-time sprinters at L&C in three individual events; the 100, the 200, and the 400,” Kowal’s former track coach, Keith Woodard, said. “She also led two relay teams, the 4 x 100 and the 4 x 400, to top five all time L&C marks. In recognition of all that Katie brought to the team, she was voted the team captain for both the women’s and men’s sprint events.”

“LC has been instrumental in my ability to make it through this application process,” Kowal said. “Associate Professor of English] Karen Gross, the fellowship coordinator for Rhodes and Marshall, provided much needed counsel and support throughout my applications. I never would have been able to reflect as deeply on who I am and where I see myself heading without her guidance.”

In the past 20 years, Lewis & Clark has produced two other Rhodes scholars: Tamma Carleton BA ’09 and Laura Provinzino BA ’98. Carleton, who majored in economics, is now a post-doctoral scholar at the Energy Policy Institute at the University of Chicago. Provinzino, who double majored in history and international affairs, went on to earn a JD from Yale Law School and now works as an assistant U.S. attorney in Minneapolis, Minnesota.

All three are members of Lewis & Clark’s Pamplin Society.