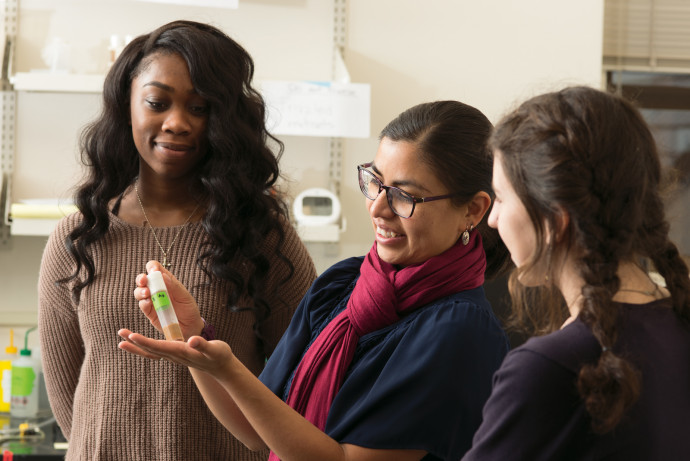 When Norma Velazquez Ulloa, assistant professor of biology and faculty member in the neuroscience program, joined Lewis & Clark in 2013, she brought guests with her—Drosophila melanogaster, otherwise known as the common fruit fly.

“I’ve had generations of them going for seven years,” she explains. “I make food for them. I clean their house. They’re like pets.” But Velazquez Ulloa’s Drosophila are more than just pets. She’s using them to understand how drugs such as nicotine affect the brain, to locate genes that may influence the likelihood of addiction, and to provide information about how the brain creates behaviors.

It’s all part of a research field called behavioral genetics, which examines how genes and environment work together to influence our actions.

“Nicotine, the addictive drug in tobacco, is one of the most commonly abused drugs in the world,” Velazquez Ulloa says. “Its ubiquity makes it interesting and a relevant teaching tool for undergraduates.” She first started studying the drug during her postdoctoral work at the University of California at San Francisco, where she developed an assay, or testing procedure, that measured the effects of nicotine in Drosophila melanogaster as they grew.

Since flies don’t smoke or chew nicotine gum, how do they get the drug? “In their food,” she says. “Flies also lay their eggs on it.”

Sometimes she restricts a fly’s access to nicotine based on the stage of its growth cycle; as a metamorphic insect, a Drosophila undergoes three development stages—egg, larva, and pupa—before maturing into an adult fly. For example, some Drosophila may be exposed to nicotine as eggs but not during the other phases. “We wanted to see if we gave a fly nicotine during development, if we would see anything that resembles what happens in mammals,” Velazquez Ulloa explains. “Based on my flies, the answer is yes. They take longer to develop, the larvae are skinnier, and the flies are smaller and weigh less. Some also die before making it to adulthood.” 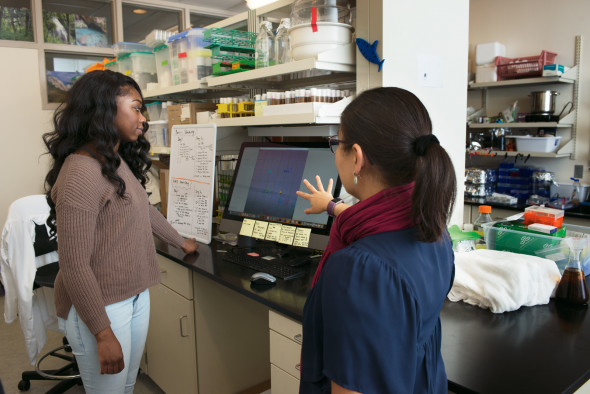 Behavioral changes on nicotine are harder to measure in fruit flies, but they are shown to occur in humans: Velazquez Ulloa cites higher likelihoods of hyperactivity, anxiety, and drug use. By studying Drosophila on nicotine, Velazquez Ulloa hopes to find genetic pathways applicable to humans that may explain why some are more susceptible to nicotine than others. Her research could eventually help with gene-based therapies to prevent people from using nicotine.

Genes serve as a blueprint for any organism, but it’s not just one gene that’s responsible for addiction, she explains. “There are master genes that control the expression of other genes. One could control a hundred more. It’s like a domino effect,” she says. Flies on Film When most people think about creatures that closely mimic humans, Drosophila may not immediately come to mind. But they’re a model organism for Velazquez Ulloa’s work: since a fruit fly’s complete set of DNA has already been mapped out, researchers know where its genes are located. They can use that information to compare against human genes.

Just as in human-based studies, one way to assess a drug’s effects on Drosophila is through careful and deliberate documentation of their actions while on the drug. Recently, Velazquez Ulloa and her students collaborated with Peter Drake, associate professor of computer science, and his software development class to track fly movement.

In Velazquez Ulloa’s lab, students film videos of fly larvae moving around on a square plastic chamber placed in front of a white background, using illumination from the back to make the larvae appear dark. This setup is used to determine how fly larvae with different genetic mutations change their motion. Prior to the collaboration with Drake’s students, tracking larvae was a painstaking process: it required a student to note the position of each larva in each frame of video. But the new program, designed by students, locates the larvae and automatically tracks them throughout the video, allowing researchers to quickly examine their movements.

Horde of the Flies

HOUSING. Drosophila colonies live in cylindrical plastic vials, each about the size of a thick Magic Marker. Each colony gets 10 milliliters of food—a soupy mixture of molasses, cornmeal, agar, yeast, and water that turns to gel as it cools. They get moved into a new “home” (a clean vial) about every four to six weeks; any longer and fly excrement collects at unhealthy levels.

EXPIRATION DATES. Because they’ve been genetically modified, Velazquez Ulloa’s Drosophila melanogaster can’t just be released into the world. When an experiment concludes, they’re frozen at −4˚ Fahrenheit for four days and then boiled for 25 minutes. Only after that are they thrown away.

RESPECT FOR THE FALLEN. But it’s not an entirely unceremonious dumping. Velazquez Ulloa, in true liberal arts fashion, has been known to share her Mexican culture with students by setting up an ofrenda, or altar offering, on Día de los Muertos to honor the lab’s dead flies.

“Before arriving at Lewis & Clark, I’d only been at large institutions. We have big universities in Mexico, but not liberal arts colleges that also have research,” she says.

Mexico’s education system is different than in the United States, she explains. There, students must choose a field of study before they even set foot on a campus. “By the time you’re 16 or 17, you have to select a track—humanities, arts, different types of science. During your last year of high school, you focus on your track to study for exams and apply to university,” she says.

Hailing from Mexico City inspired Velazquez Ulloa’s love of science. “As a kid, I always liked stars, even with the light and air pollution. I had a telescope and stayed up on my own to watch lunar eclipses. I wanted to be an astronomer.” But as a teenager, she worked as an astronomy intern and realized it wasn’t for her: the day-to-day work involved more squinting at tiny computer images than gazing through telescopes. She switched her major to biology.

Living close to a music school as a child, she took up piano and played through her late teens, until school and lab work claimed increasing amounts of time. Yet that teaching style stuck with her: “I love mentoring. I think it comes from my music training, where it’s just you and your teacher, one on one. That’s the kind of teaching you’re doing in lab,” she says.

Melanie Morris BA ’15, now a third-year medical student at the University of Washington, says Velazquez Ulloa is an excellent teacher whose support has been vital to her pursuit of a medical career. “Norma asks intellectually stimulating questions and helps her students use data to answer them,” says Morris. “She emphasizes the importance of effective communication, coaching students to make clear presentations and teaching them how to talk like scientists.”

Velazquez Ulloa prefers mentoring undergraduates, she says. She appreciates their excitement and likes watching them build confidence. Some undergraduates may have a science background, and others might not, but that makes working with them more energizing.

Asia Wooten BA ’20, a biochemistry and molecular biology major, says Velazquez Ulloa cares about what students learn and how they learn it. “She’ll go out of her way to make sure you not only have a strong grasp of the material but also what you need to become a better scientist,” Wooten says.

Velazquez Ulloa strives to get to know her students to determine their interest in different techniques. “Some might enjoy working with data, while others might want to spend more time with the microscope,” she says. “Responsibilities depend on the student; I try to be mindful of their commitments.” Throughout the school year, she usually has between two and six students in her lab; during the Rogers Summer Science Research Program, anywhere from 3 to 10 students work alongside her.

“It didn’t matter what my question was, she was always willing to talk to me,” says Eve Lowenstein BA ’17. Lowenstein’s tasks in Velazquez Ulloa’s lab included studying fly locomotion and the formation of synapses in the neuromuscular junction. Lowenstein, a Pamplin Scholar and recipient of a Barry M. Goldwater Scholarship, entered college wanting to be an engineer, but she says Velazquez Ulloa’s influence changed her path; she’s now working toward a PhD in the OHSU Graduate Program in Molecular and Cellular Biosciences. “I became a scientist because of her.”

Velazquez Ulloa pursues her own learning, too. She actively participates in Lewis & Clark’s Research Boot Camp, which provides faculty a supported space several hours a week to work on projects such as research grants. “The dedicated space and time to write and think about research have been incredibly beneficial,” she says. She keeps in touch with former students and colleagues, reading each other’s grants and regularly meeting up at scientific conferences.

In October 2010, she was awarded a New Investigator Grant by the Medical Research Foundation. The award supports promising new biomedical researchers in Oregon with one-year, $40,000 competitive grants. This is the third successful research grant for her as principal investigator; it follows a three-year M.J. Murdock Charitable Trust Natural Sciences research grant and a two-year Partners in Science award.

She believes awards like these are both a validation for her work at L&C and a way to set the stage for future plans.

“My research is still fairly new: I’m just now starting to see more independent grants come to fruition,” she says. “I’ve been working to establish myself as an independent researcher for more than five years, and feel I’m becoming more competitive as a grant candidate.”

The brain has long fascinated her, Velazquez Ulloa says, but especially the nervous system as a whole. “It makes us able to control what we do, who we are, and what we become. That’s where my passion starts.”

She continues, “We don’t know how to stop someone from smoking. And we’re years away from preventing ADHD. But it’s important to keep doing basic research to understand how the nervous system really works.

“There are a lot of ‘black boxes’ when it comes to drugs and their effects. We don’t know many of the mechanisms of how drugs of abuse work on the nervous system. Although a fruit fly is a simple organism, it’s complex enough to be similar to a human. This research allows us to find the pieces in that black box and connect the drug and the effect.”

Carin Moonin is a freelance writer in Portland.