Bringing a High-Performance “BLT” to Life 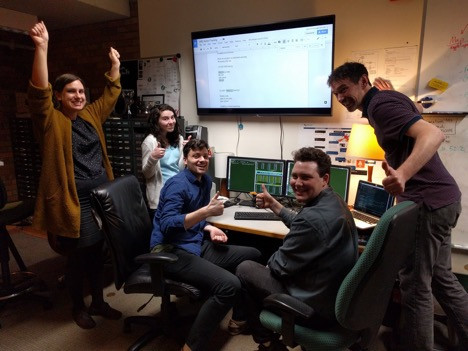 The HPC team running their first job ever run on BLT.Lewis & Clark is discovering an array of uses for high-performance computing (HPC), such as in the Australia overseas program’s class on venom biology, in computer science courses in artificial intelligence, parallelism, and cybersecurity, and in applications of computational physics.

Several years ago, the college found itself in need of a “big computer” to process the enormous data set required by a bioinformatics-based senior thesis. Although HPC—in which supercomputers or parallel processing techniques are used to solve computational problems and process data—would normally not be available at an institution the size of Lewis & Clark, a team of representatives from the departments of biology and computer science plus Watzek Library and Information Technology began tackling the problem.

“Undergraduates usually don’t get the chance to work on stuff like this,” says Benjamin Glick BA ’20, a computer science and mathematics and physics double major from Chicago. “L&C, despite not being a ‘research institution,’ is a great place for inquiry.”

Glick says he’s been passionate about computers since childhood. While still in high school, he worked with the Computation Institute at the University of Chicago. The experience opened his eyes to the potential of high-performance computers. “The Computation Institute exposed me to a side of computer science that I was really interested in—taking a computer and using it to solve problems.”

The HPC initiative started small but has grown with the help of many, including Glick. He became involved in the project when he met Professor of Computer Science Jens Mache.

Enthusiastic about working with the college’s new HPC system—named BLT for its worker nodes “bacon, lettuce, and tomato”—Glick got a work-study job with Watzek Library’s Digital Initiatives unit. He worked with Mache and the Digital Initiatives team to make BLT a functional and important aspect of Lewis & Clark’s research opportunities.

“Ben has been the best undergraduate researcher I have worked with over the last 20 years,” said Mache. “He was invaluable in kick-starting our HPC initiative and providing opportunities for cross-disciplinary research, and his maturity, dependability, energy, and dedication are impressive.”

Ben Glick BA ’20 presenting at the SC conference.For the last two years, Glick has written and published several academic papers and posters about the applications of his BLT efforts, both on campus and around the country. Last November, he presented a peer-reviewed paper, “Jupyter Notebooks and User-Friendly HPC Access,” at the Education for High-Performance Computing workshop that was part of an international supercomputer conference.

Glick hopes to continue working in the high-demand field. His research ultimately gives others the chance to do more computational research. Whether through classroom usage or research projects on campus, there are many innovative ways BLT can be used in education and in everyday life, once introduced to students.