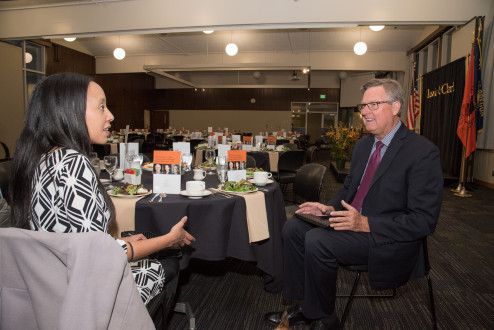 Ambassador Niels Marquardt BA ’75 (right) with Haben Girma BA ’10 at the 2017 Distinguished Alumni banquet.Lewis & Clark President Wim Wiewel has appointed former United States Ambassador Niels Marquardt BA ’75 as the college’s first diplomat in residence. Marquardt left the U.S. Foreign Service in 2013, having served as America’s top diplomat in Madagascar, Cameroon, the Comoros, and Equatorial Guinea during a 33-year diplomatic career that included service in Germany, France, Thailand, and the Republic of the Congo. His final State Department assignment was as U.S. Consul General in Sydney, Australia, where he remained and served another four years in the private sector as CEO of the American Chamber of Commerce in Australia.

Ambassador Marquardt BA '75 speaking to students interested in careers in diplomacy.Marquardt kicked off his new role with a lecture Tuesday afternoon on the undergraduate campus, “The American Foreign Service: Myths and Realities.”

“I am delighted to return to the place that literally launched my own long global career,” Marquardt said. “I hope I can help inspire students today to follow similar paths from Lewis & Clark out into the wider world.”

As diplomat in residence—a volunteer position—Marquardt will work closely with the Career Center and college departments to enrich the experience of students interested in international affairs, entrepreneurship, foreign language, and all other fields of study with global aspects. His extensive base of overseas contacts and many connections in Washington will also open new doors to connect additional international leaders with the Lewis & Clark community.

“Lewis & Clark’s strong international focus and reputation will be further enhanced by having Ambassador Marquardt available on campus to both students and faculty,” said President Wiewel. “Niels is uniquely qualified to advise students not only on international careers in government, but also on career opportunities overseas in business, education, and the non-government sector. Additionally, his decades of experience as an American diplomat will provide a new dimension of insight, especially to our international affairs majors.”

After graduating from Lewis & Clark in 1975, Marquardt served as a Peace Corps volunteer in Zaire and Rwanda. He earned his master’s degree in global management from the Thunderbird School of Global Management and his master’s in international security strategy from the National War College.

In 2017, Lewis & Clark honored Marquardt with the Distinguished Alumnus award.