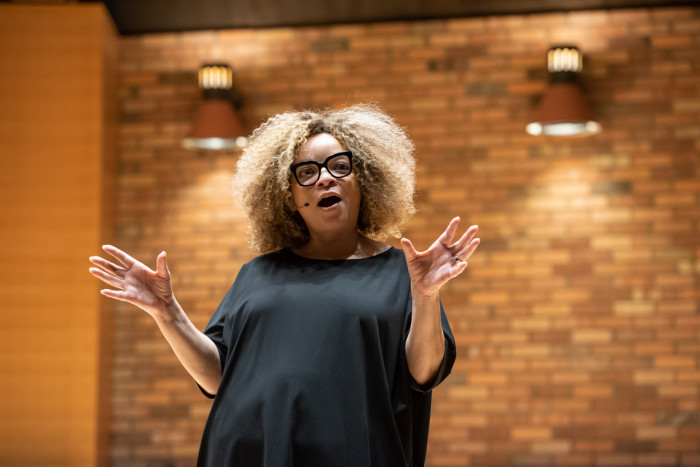 Ruth Carter made history at the 2019 Academy Awards as the first African American woman to win the Oscar for Best Costume Design for her work on the blockbuster film Black Panther. She was also nominated for Malcolm X in 1993 and Amistad in 1998.

Carter has worked in the entertainment industry for over 30 years, designing costumes for characters in culturally significant films including Selma, Love and Basketball, and The Butler. On March 20, Lewis & Clark had the privilege of hosting her on campus to hear about her career trajectory and visual storytelling process.

Carter started her talk by projecting pictures of her own time in college, inspiring students in the crowd by showing them that she used to be right where they are. She proceeded to go into detail on her Black Panther costume designs and walked the audience through the entire creative process.

Carter emphasized that although this was technically her first superhero blockbuster, she has actually been designing for real-life superheroes throughout her career in films like Malcom X, Selma, and Amistad. “Every year I have been designing for superheroes,” said Carter. “Having a purpose is part of the artistry, and that purpose is to bring to life the truth of the people.” 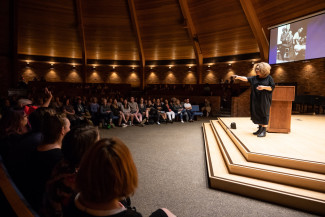 Ruth Carter takes questions from curious-minded students.The talk was followed by a flurry of hands raised, with questions ranging from what her dream job was to how she approaches differences in her creative vision from that of executives in production.

Eva Magaña BA ’20, a rhetoric and media studies major and president of Students for Cultural Inclusion in the Theatre (SCIT), introduced Carter before she took the stage.

“SCIT [which cosponsored Carter’s visit] aims to provide the 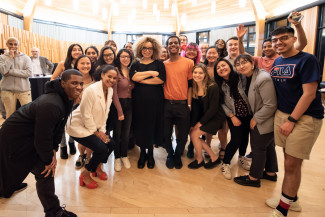 resources necessary for students of color to feel comfortable on campus,” explains Magaña. “For some students it’s seeing a guest artist of color, like Ruth Carter, share their unique experiences and advice. For others it’s the ability to perform a play with less time commitment compared to the main stage, which is what we aimed to do with our collaboration with the Ray Warren Symposium on Race and Ethnic Studies.”

The evening before Carter’s talk, Magaña and Michael Olich, associate professor of theatre and resident designer, held a screening of Spike Lee’s iconic Do The Right Thing. Carter also designed the costumes for this film. Following the screening, Olich led students in a discussion about costumes and design in theatre. Magaña, who assisted Olich in the costume design for the fall 2018 theatre production of Sweeney Todd, feels confident applying to internships and jobs post-graduation because of the connections she has made in the theatre department and appreciates the versatility of the skills she has gained.

“What I’m doing here is teaching students how to be informed, imaginative audience members,” said Olich, who has been with Lewis & Clark for 13 years and teaches Scenography One and Two, both courses that introduce students to specific stories and the challenges of telling them visually.