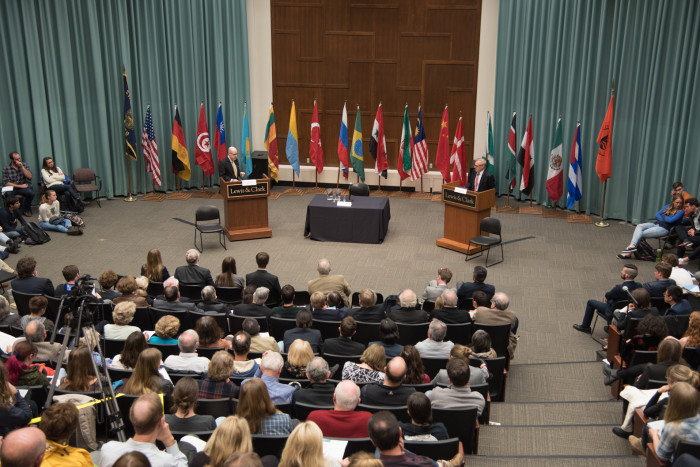 Lewis & Clark’s 57th International Affairs Symposium kicks off on Monday, April 8 and will run through Wednesday, April 10. Titled Challenges to the Status Quo: A System Unraveling?, the symposium explores the forces that are defying widely accepted norms and institutions worldwide, from nuclear disarmament and private military contractors to the universality of human rights and the agendas of nongovernmental organizations (NGOs).

As the oldest student-run symposium in the country, this event has been nationally acclaimed by The Wall Street Journal, The New York Times, and The Chronicle of Higher Education. This year, the event is cochaired by international affairs majors Nejra Gradan BA ’19 and Emina Ema Ibisević BA ’19, both hailing from Bosnia and Herzegovina. They are supported by a steering committee, comprised of 12 students from a multitude of countries and representing a variety of academic disciplines.

With so-called populist movements challenging the status quo worldwide, Monday evening’s keynote debate will focus on recent populist uprisings and the crisis of representation within democratic systems and institutions. The debate, titled “The Populist Disruption: Make Democracy Great Again,” will feature Yascha Mounk, a political analyst and leading expert on the crisis of liberal democracy and the rise of populism, and Richard Morales, an executive counselor and former presidential candidate for Frente Amplio por la Democracia (FAD), a political party in Panama. Mounk will argue that while democracy may be flawed, the system can be fixed; Morales brings perspective on what it is like to participate in the populist movements being debated and advocates for radical change.

Although the debate topics are meant to be controversial, the committee aims to inspire constructive and productive conversations, both within the debate and across campus.

“There were many different experiences that [committee members] brought into the conversation,” Gradan said. “A lot of the things we talked about related to the countries they are from or some kind of personal experience. That really contributed to the quality of the topics that we decided to go forward with in the end.”

“We don’t want to simply give people answers,” Gradan said. “The point of exposing our audience to two different points of view is so they can leave that session and think about it at home, and use what they know about that topic and what they heard to create their own opinion.”

Both Gradan and Ibisević are Davis United World College Scholars.

All debates will be held in in the Council Chamber in Templeton Campus Center and are free and open to the public. A full schedule of the events can be found here.