Renewable energy now illuminates villages in Malaysia, combats gentrification in Portland, and transforms lives locally and globally due to initiatives led by students and a voluntary fee of $20.

The Green Power Initiative, maintained by the fee, has allowed the college to purchase Renewable Energy Certificates (RECs) and carbon offsets, as well as fund student projects in renewable energy. RECs are traded, non-tangible representations that 1 megawatt-hour (MWh) was generated from a renewable energy source; offsets are reductions in emissions greenhouse gases made in order to compensate for emissions made elsewhere.

According to Amy Dvorak, Lewis & Clark’s sustainability director, the credits aren’t for directly buying renewable energy, but instead support renewable energy projects elsewhere. Since 2003, the program has been expanded to represent 100 percent of the power used by the campus. Currently, some 95 percent of undergraduate students voluntarily pay the fee each year. The initiative allows the college to invest and establish a competitive bid among REC providers.

Over the last decade, the fund has generated a surplus – the results of competitive bidding, lower than projected REC prices, high enrollment and fee participation, and reduced energy use on campus. This surplus, which makes up the Renewable Energy Fee Fund (REFF), is available for students in the form of project grants. Students can apply for funding for projects related to renewable energy all over the world, with grants being offered once per year and up to three times during their time at Lewis & Clark. In recent years, REFF grants have funded a Malaysian solar energy project led by international student Ary Hashim BA ’20, and an affordable housing project in Portland led by Kori Groenveld BA ’18 and Frances Swanson BA ’17 to combat gentrification and unequal distribution of sustainable infrastructure. 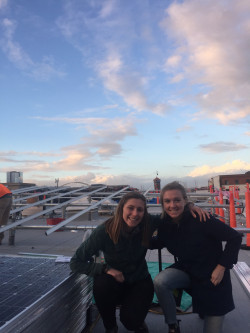 Franny and Kori on the roof of the Sally McCracken Building in Portland.

“We’ve had a number of students who either did projects or served as the (REFF) intern or on the (REFF) committee that later went on to work at renewable energy fields or for different nonprofits doing environmental work, as well as some social work,” Dvorak notes. “That has been cool for me to see the impact sustainability has had on student lives after they left here.”

The REFF committee is made up of two ASLC (Associated Students of Lewis & Clark) representatives, two at-large student members, a paid student position (renewable energy intern), and representatives from the college’s administration. Together, the committee assesses applications and chooses which projects to fund. The committee also selects the RECs and offsets that the college buys.

Almeida (L) with her golf teammates, after winning the 2018 Puget Sound Invitational Tournament.LC’s current Renewable Energy Intern, Jane Almeida BA ’19, is an economics major with a double minor in computer science and environmental studies from El Dorado Hills, California.  Almeida splits her time between school, work, and playing for the women’s golf team. This year, Almeida served as chair of the REFF Committee and led deliberations on which RECs and carbon offsets to purchase, and which grant applications to fund.

The Committee selected national RECs, as they agreed it did not matter where carbon is being reduced, just that it is being reduced. Members also chose carbon offset projects in Astoria, Oregon, as well as in Kenya and the Democratic Republic of Congo.

“The REFF give students an opportunity to take what they are learning in the classroom and apply it to the real world and see how it works. For me, it is such a great opportunity to become more familiar with the grant writing and approval process, but other students have become involved with cool projects,” Almeida says. “Those experience cannot be taught and the Renewable Energy Fee Fund makes them possible for students.”

Almeida’s experience with the REFF has set the stage for  her to pursue work in renewable energy after Lewis & Clark. She has held five internships so far and, after graduation, will be working as a Real-Time Energy Trader at Arizona Public Service Company.