Lombardi in front of his shave-ice food truck, at the taping of the American Ninja Warrior episode in which he competed.

Most student-athletes don’t get the opportunity to show off their athletic abilities on national television. An exception is Nick Lombardi BA ’21, who will appear on the upcoming season premiere of the hit obstacle-course competition, American Ninja Warrior. On air since 2009, ANW – as its fans know it – features hundreds of athletes competing on famously challenging obstacle courses. The season culminates in the national finals on the Las Vegas Strip. Lombardi, who grew up in Pleasant Hill, CA, has always been a huge fan of the show, but was too young to apply. He was ecstatic when NBC lowered  the age limit from 21 to 19.

The political science major, who competes in basketball and golf for the Pios, originally didn’t imagine that he had a chance to be  picked, as the producers receive thousands of applications each year. Now he thinks that details in his three-minute audition video may have given him an edge. Those details include a self-described “obsession with Lilo and Stitch collectibles” and a passion for entrepreneurship, including starting and running his own shave-ice business in Pleasant Hill, which he operates when he’s home for the summer.

“I think what [the ANW casting directors] liked about me, what they focused on in the interviews, was the shave-ice food truck,” said Lombardi, who crowdfunded the startup. “They were really interested in that.” 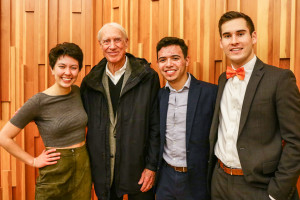 Lombardi (right), with mentor and donor John Bates (second from left), and members of his 2018 Winterim-winning team.For the past two years, Lombardi has participated in Winterim, an annual program run during winter break by Lewis & Clark’s Bates Center for Entrepreneurship and Leadership. For one week in January, 30 LC students immerse themselves in the world of entrepreneurship and innovation. Working in groups of three or four, students have the opportunity to create, research, and develop a business idea, and then take part in a pitch competition on the final day. Lombardi’s groups have won the competition both years.

“The common thread of all Bates Center experiences is engaging an entrepreneurial mindset to apply the adaptability, critical thinking, and problem solving of the liberal arts in new and ambiguous situations,” says Chrys Hutchings, the Bates Center’s associate director.

Lombardi and his many fans look forward to watching him put those skills and more into action when American Ninja Warrior premiers its 11th season on Wednesday, May 29, from 8-10pm on NBC.