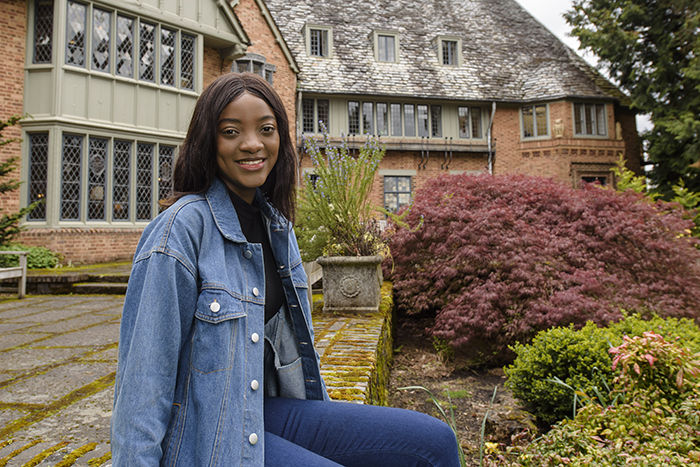 Innovation and creativity are core values at Lewis & Clark, and resources including the Bates Center for Entrepreneurship and Leadership and opportunities such as Winterim, an annual weeklong entrepreneurship experience, help students put those values into practice. Tuse Mahenya BA ’21 exemplifies this entrepreneurial spirit: she is organizing  L&C’s first TEDx event, “Deconstruct,” scheduled to take place on October 9.

An English major and political economy minor from Dar es Salaam, Tanzania, Mahenya participated in a TEDx event while attending a UWC (United World Colleges) international baccalaureate school in eSwatini (formerly Swaziland). Many of L&C’s international students hail from UWC schools around the world and are part of the Davis United World College Scholars Program, created to encourage UWC students to continue their education in the U.S. and build international and intercultural understanding. Mahenya hopes to highlight some of UWC’s values on campus.

“UWC pushes you to listen to people, especially when you don’t agree with them, and that’s just something that I didn’t feel like anyone, or very few people, have in the classroom here,” Mahenya said. “There’s no way someone will change if they’re too scared to say exactly how they feel. For example, in the extreme version, racist people will continue to be racist because you’re not telling them to stop. You’re just making them do their racism really quietly.”

TED, which stands for technology, education and design, began as a nonprofit in the 1980s devoted to spreading ideas via short, powerful talks (18 minutes or less). Mahenya started the licensing process last fall  to give students an acclaimed platform for sharing their ideas. She hopes that the theme, “The Deconstruction of Everything We Know,” will prompt speakers to share experiences that challenged their initial ideas or preconceived notions.

As per TED requirements, the event will run for three hours and feature four to six speakers, in addition to two recorded talks from larger TED events. Because the event is designed to be intimate, it will be held in the Black Box theatre, limiting seating to 100. The majority of tickets  will be reserved for students for a small price.

After granting the license and handing over their basic rule book, the larger TED organization is hands-off. Mahenya, co-organizer Ariel McGee BA ’21, and a team of six other students are completely responsible for coordinating the event. Funding will come from the Bates Center for Entrepreneurship and Leadership.

While anyone can be a speaker — faculty, staff, student or community member — Mahenya hopes to prioritize giving opportunities to students. She and her team are currently promoting the event to the student body and holding speaker auditions. The speakers, once selected, will have the entire summer to prepare their talks and the beginning of fall to rehearse with one another. TED requires each speaker to have a mentor, many of whom will be L&C professors.

“I’m an English major, so most of my professors are helping,” Mahenya said. “It just feels like everyone is pitching in and wanting to be a part of it because it’s a really cool thing.”

Mahenya hopes TEDx will have a lifespan far past her graduation. Her vision is that every student will get a chance to attend at least one TEDx event while at Lewis & Clark.