Bringing Imaging to Life: Professor and Student Collaborate on Textbook

Many teachers are quick to offer a disclaimer that they’re not artists when they start drawing in front of their classes. So, in developing her upcoming biomedical imaging textbook, Professor of Physics Bethe Scalettar enlisted the help of an art student. Cyan Cowap BA ’19, a studio art major with a drawing focus and a minor in rhetoric and media studies from San Diego, California, has spent the last year creating the detailed illustrations for Scalettar’s textbook.

A few years in the making, the textbook is the culmination of hard work by many individuals. When the Howard Hughes Medical Institute awarded Lewis & Clark a $1.3 million grant in 2008, Scalettar received funds to create a biophysics course (PHYS-390 Biomedical Imaging). The course has been taught annually since its inception but without a textbook as a foundation. 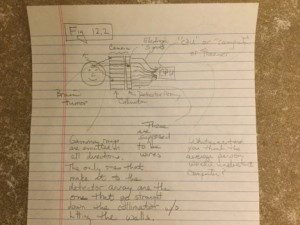 Original sketch by Jim Abney of gamma rays being used to visualize tumors.“The course has tested my creativity quite a bit,” said Scalettar, who has been teaching at Lewis & Clark since 1993. “I struggled very hard to make the course because I had no textbook to guide me. And the books that are out there weren’t at the appropriate level for an upper-division physics course. I thought it would be great if I could make it easier for other people to teach the course. At the same time, a senior publishing editor from Taylor and Francis also realized that there wasn’t a textbook.”

With her husband, James Abney, a patent lawyer with a biophysics background, Scalettar began writing a textbook. About a year ago the duo realized that they were lacking illustrated renderings of their topics. 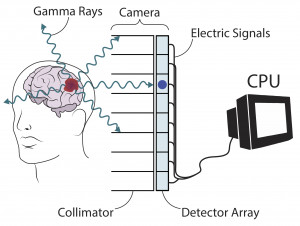 Illustration (based on the sketch above) by Cyan Cowap showing the use of gamma rays to visualize a tumor in the brain.Serendipitously, Cowap had gone to the reference desk at Watzek Library to find images for her Drawing II final project and was connected with Science and Data Services Librarian Parvaneh Abbaspour. Around the same time, Abney had gone to a science illustration workshop hosted by Watzek, where he met Abbaspour and talked about the search for an illustrator. Scalettar and Abney applied for an EdTech Faculty and Staff Development Fund grant, Abbaspour notified Cowap about a job position, and the rest tied together neatly—two separate disciplines and two separate pieces of the puzzle.

Illustration by Cowap showing the penetrating capacity of various types of particles and electromagnetic radiation.“One of the things we know to be true is that illustrations are a huge component of the textbook because the visual elements are tremendously effective at portraying information. Neither one of us is good at art, so we really needed someone who had a skill that is way outside of our domain,” Scalettar noted. “Cyan has played an indispensable role in conveying things visually.”

Several hundreds of illustrations later, Scalettar, Abney, and Cowap have gotten quite close to finishing their work. The textbook is slated for publishing in early 2020 to aid those teaching courses on biomedical imaging in the spring.

“It’s been such a good professional experience for me,” says Cowap, “because the studio art classes are about personal projects rather than commercialized industry experience. Bethe and James have been so flexible with me, and we’ve been learning how to do this together. And now seeing all the illustrations placed with the text has been very gratifying.”

Cowap spoke enthusiastically about the project. “I definitely bring a different perspective to the table than a scientist does. There’s a specific way you do things in science and math textbooks that I didn’t know about. I think I’ve made this book more readable and easier to understand because I know and understand how aesthetics work. It’s been an interesting merging of physics and art.”