An Ambassador to Global Careers 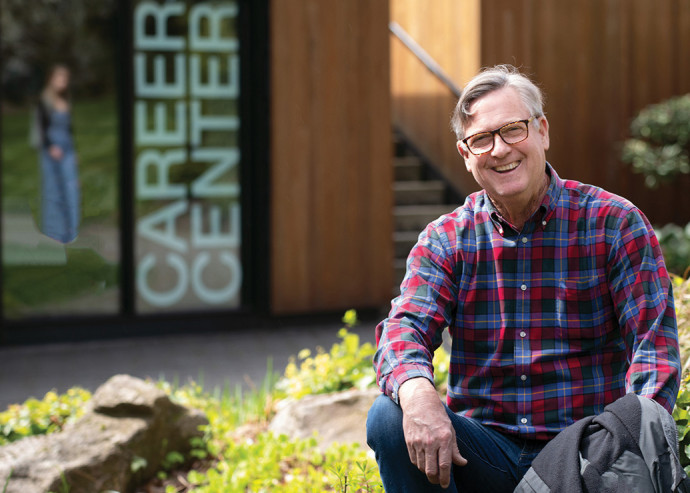 Niels Marquardt BA ’75 returns to Lewis & Clark as diplomat in residence after a distinguished career abroad.

Niels Marquardt is not accustomed to living in America.

Since graduating from Lewis & Clark College in 1975, the San Diego native has spent most of his life in other countries, including Rwanda, Cameroon, Madagascar, Congo, France, Germany, and Australia. He started out in the Peace Corps and later moved to the U.S. Department of State, where he held several high-profile positions, including four ambassadorships. After retiring from his final post as U.S. consul general in Sydney in 2013, he remained “down under” until 2017 as CEO of the American Chamber of Commerce in Australia.

At that point, Marquardt says, “It was time to come home.”

After all these years abroad, “home” to Marquardt and his wife, Judi, was Portland. Not only did one of their daughters and Judi’s parents live nearby, but his connection to Lewis & Clark had remained strong. 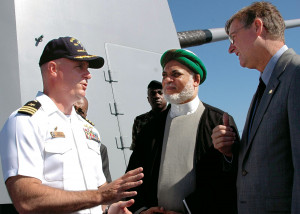 Niels Marquardt (right) and Commander Dean Vesely (left) welcome Comoran President Mohamed Sambi aboard the USS Forrest Sherman off the Comoran capital of Moroni in 2007. It was the first time a U.S. Navy ship had visited the region in more than 30 years. Credit: Gillian Brigham | U.S. Navy“I feel a debt of gratitude to Lewis & Clark,” says Marquardt. “It transformed me and was a launching pad for a much more interesting career than I ever deserved. I wanted to give back.”

Conversations with his former roommate from the Munich overseas study program, Bill Fish BA ’76, led to a discussion with President Wim Wiewel. That in turn spurred an invitation to return as the college’s first diplomat in residence, a volunteer position housed in the Career Center. He assumed the role in mid-February.

Marquardt says one of his main objectives is to advocate for careers abroad. “I’d like all students to at least know what opportunities are out there.”

He’s most intimately knowledgeable about opportunities in the State Department, including its recruiting profile and what an early-career trajectory looks like. From 2001 to 2004, Marquardt served as the special coordinator for diplomatic readiness, responsible for coordinating the largest increase in State Department recruiting, hiring, and training in its history. And prior to that, he served as the State Department’s director of the Entry-Level Counseling and Assignments Division, essentially managing the nascent careers of young diplomats. 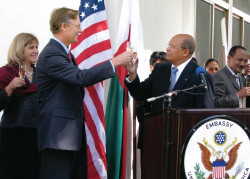 Niels, with wife Judi at his side, offers a formal toast on July 4, 2008, U.S. Independence Day, to then Malagasy Foreign Minister Marcel Ranjeva.“For me, the foreign service was a very appealing lifestyle,” he says. But the sometimes-isolated locales and frequent post changes “aren’t for everyone.”

Marquardt sees four broad categories of potential international careers for Lewis & Clark graduates: 1) government, including the U.S. foreign service and the Peace Corps; 2) nonprofit work with overseas organizations, such as disaster- relief agencies and environmental conservation groups; 3) multinational corporations, many of whose interests Marquardt represented leading the American Chamber of Commerce in Australia; and 4) teach- ing jobs, which Marquardt says are often overlooked by students interested in education.

“If you want to be a teacher, think about being a teacher overseas,” he says. “Imagine how much better a teacher would be if they had spent a few years teaching in a completely different culture.

“I hope I can convey my enthusiasm for all of these opportunities,” he continues. “We often impose our own set of blinders on what’s possible. I’d like to make sure students consider all their options, including those they may not have thought of. A lot of the possibilities are pretty exciting.”

Marquardt also envisions sharing his career experiences with students, both informally through open office hours and formally through occasional guest lectures. His stories include what it’s like to be an ambassador to longtime dictatorships (Cameroon and Equatorial Guinea), to a country in the midst of a brief civil war (Comoros), and to another during a tumultuous period when the elected president handed Marquardt his resignation letter (Madagascar). 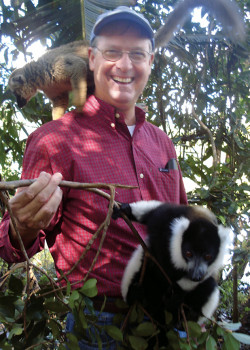 Niels experiences an abundance of lemurs at Andasibe-Mantadia National Park in central Madagascar in 2008.He also hopes to be “a magnet for attracting talented people” to campus who work in international affairs. In Marquardt’s first month on the job, he arranged for Ambassador Joseph Yun, former U.S. special representative to North Korea, to speak about the recent denuclearization talks in Hanoi.

Marquardt says he wants events like this to help “cast the net more widely” for students whose interests may be piqued by overseas service. He still remembers his own first meeting with a U.S. diplomat: Sam Lewis, the then deputy assistant secretary of state who went on to become the longest-serving U.S. ambassador to Israel, who spoke at the college’s International Affairs Symposium in 1975.

“I originally chose to attend Lewis & Clark because it had an appealing foreign languages program, a great overseas study program, and a very strong international affairs department,” he explains. “That international focus which brought me here in the first place is still as strong as ever.”

Today, Marquardt himself is determined to make it even stronger.

Dan Sadowsky is a filmmaker and writer based in Portland. 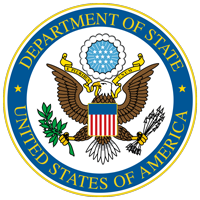