Off the Street, Out of Court 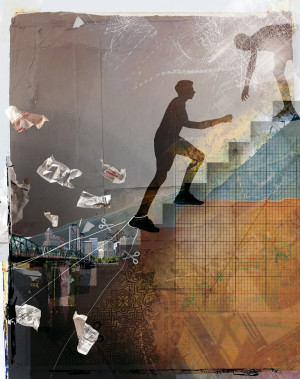 Valerie* had gotten so tangled up in legal and life troubles—family issues, homelessness, health concerns, financial debts, a criminal record—that she needed help to get out of her predicament.

Seeking a fresh start, the 24-year-old reached out to New Avenues for Youth, a nonprofit in downtown Portland that aids homeless teens and young adults. Her timing was good. New Avenues had recently established a partnership with Lewis & Clark Law School’s Criminal Justice Reform Clinic (CJRC) and the Community Law Division of the Metropolitan Public Defender (MPD).

With the help of Professor Aliza Kaplan, founder and director of the CJRC—as well as Lisa Fitzgerald, lead attorney on the project from the MPD, and several law school students—Valerie gained emancipation from a court-ordered guardianship, granting her the right to take charge of her own finances and health care. She was able to expunge a criminal record and get associated fines waived; sign a lease for an apartment; and apply for federal aid to attend college.

Lynette Belsky, a second-year law student from San Diego who worked on Valerie’s case through the CJRC, says working with New Avenues clients has been challenging yet rewarding.

“There are so many barriers holding them back,” Belsky says. “When they realize someone’s in their corner, it can mean so much. I didn’t come to law school to work at a big firm or make a ton of money. For me it’s about making a difference in people’s lives.”

The New Avenues for Youth Legal Clinic is a vital resource for the city’s homeless youth. Kaplan describes the work as “barrier reduction” in that the clinic focuses on the many frustrating—and often relatively minor—impediments that can be overwhelming for vulnerable clients. The cases typically include expunging criminal records as well as clearing fines, fees, and debts, but may touch on issues ranging from immigration to housing. Launched in 2017 as a pilot, the joint initiative provided legal assistance to nearly 150 clients in its first year.

“A lot of what we do doesn’t involve complicated legal issues,” Kaplan says. “Our work is really about helping these young people move forward in their lives.”

Although estimates vary, New Avenues staff say there are 1,500 to 2,000 homeless youth in Portland at any given time. On top of other hardships, homeless people have a higher incidence of run-ins with the law. In 2018, the Oregonian reported that homeless people, who represent under 3 percent of the city’s population, accounted for over half of all arrests by police, the vast majority of those involving nonviolent offenses.

New Avenues has provided an array of social services for more than two decades, but a free legal clinic was “the missing piece,” says Jessica Elkan, the nonprofit’s director of development and communications. Youth can connect with the clinic through a referral from a New Avenues case manager or social worker or via its drop-in hours.

About 4 out of 5 New Avenues clients require legal assistance to resolve problems that, in many cases, are preventing them from getting off the streets. With demand so critical, community partnerships are key. “The impact of this program is only possible because of the support we’re getting from Lewis & Clark Law School,” says Elkan. “Law students benefit by getting a chance to do important work on one of the most critical issues facing the community.”

Kaplan, an award-winning professor who joined the law faculty in 2011, selects up to a dozen students each year to get hands-on, real-world experience through the CJRC’s projects.

“As future lawyers,” Kaplan says, “the students need to understand the power they have to transform people’s lives.”

Fitzgerald, the MPD attorney working with New Avenues, says shouldering the responsibility that comes with representing clients is invaluable for aspiring lawyers.

“This work can be emotionally taxing for law students,” she says. “But they get the opportunity to have a tangible impact—such as helping a client get access to housing—and those outcomes feed the fire to keep working.”

Under the guidance of Kaplan and Fitzgerald, Lewis & Clark law students working with New Avenues spend up to two days a week during the school year conducting research; writing motions and letters; and representing clients in court proceedings.

Belsky, who attended Lewis & Clark Law School for the opportunity to work with the CJRC, was nervous the first time she stood in a courtroom to ask the judge to waive a client’s fines, but the experience improved her confidence and reinforced her commitment to public interest law.

“You get so busy with academics, it’s easy to forget why you’re in law school,” she says. “Writing legal motions for clients or arguing for them in court reminds you how legal work can help improve lives.”

New Avenues client Valerie has been inspired by the experience, too. As she prepares to start college, she envisions a career in the law. “The help I received played a huge part in saving my life,” she says. “Someday, I’d like to go to law school and work with others in my situation.”

*Not her real name.