In summer 2017, singer-songwriter Katy Davidson stepped into the future by revisiting the past.

After a 12-year hiatus, Davidson was once again recording with their band, Dear Nora, in a Portland studio. Earlier that year, Orindal Records had reissued one of the band’s old albums, Mountain Rock, on vinyl. Motivated by the album’s renewed acclaim—and the band’s enthusiastic reception on a subsequent tour—Dear Nora felt inspired to lay down new tracks.

The result is the album Skulls Example. “It’s a name I once chose for myself during a party by closing my eyes and picking two words at random from a book of magic.”

Davidson describes the album’s style as “experimental pop.” Davidson’s warm, breezy voice and challenging, thought-provoking lyrics glide over pop melodies on the album’s 14 tracks. Thematically, the songs examine “the magic and horribleness of life intertwined.” Lyrically, they evoke images of nature and wilderness—desert vistas, mountains, the sun, the moon, and storms. “I love using metaphors and words that have more than one meaning.”

Davidson has been composing, recording, and performing for nearly 20 years under different monikers. Davidson currently tours about two weeks each year with Dear Nora, which they named after Nora Beck, Rogers Professor of Music at Lewis & Clark. “We love Nora.” In 2013, Davidson and Beck worked together to release Beck’s album Strange Land on bandcamp.com, an online music label.

Davidson’s main gig is producing music for Marmoset, a Portland-based company that provides “meticulously curated music” for TV, internet, and video projects. “I hire composers to produce songs and music scores based on my creative briefs. It’s a collaborative process.” Davidson grew up in the small desert town of Cave Creek, Arizona. As a teenager, Davidson learned guitar by playing along with the grunge band Nirvana on compact disc. “I was a little too timid to write songs back then.” When college rolled around, Davidson chose Lewis & Clark to experience life beyond the desert and Portland’s thriving alternative music scene. 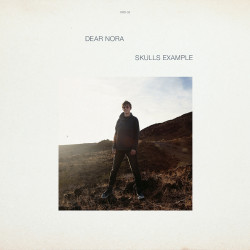 As a student, Davidson was originally interested in chemistry; however, an awakening during sophomore year resulted in a shift to English. Davidson went on to edit the Pioneer Log student newspaper and formed a band called the Navin R. Johnsons (named after actor Steve Martin’s character in the movie The Jerk). Fellow classmates Jake Longstreth BA ’99 and Marianna Ritchey BA ’99 played in both bands and encouraged Davidson to write songs. The network of L&C friends Davidson made, and kept, has been invaluable.

After Dear Nora disbanded in 2008, Davidson sharpened their skills on the electric guitar and, for three years, worked as a touring guitarist and vocalist in the bands YACHT and Gossip. Over the course of their career, Davidson has toured more than 20 countries, including Europe, South America, Japan, and Australia. Tired of life on the road, Davidson started working with Marmoset.

Davidson plans to continue working for the company remotely after selling a home in Portland and moving to Joshua Tree in California’s high desert to live with their partner, Andrea. The close-knit community reminds Davidson of their childhood home.

Davidson’s not sure when Dear Nora will produce its next album but can’t imagine a life without music. “Writing and singing come naturally to me. It’s the way I understand the world and express who I am.”