Forging His Own Path in Tech

In April, Devin Owen hopped on his dual-sport motorcycle, embarking on a solo six-month adventure.

Before continuing his tech career in San Diego, he’s riding the TransAmerica Trail, a roughly 5,000-mile network of dirt roads and back roads that spans nearly a dozen states.

“I’m traveling from Portland, Oregon, to Portland, Maine, and back again, stopping to visit family in Durango, Colorado, and taking time to explore the East Coast,” he says. 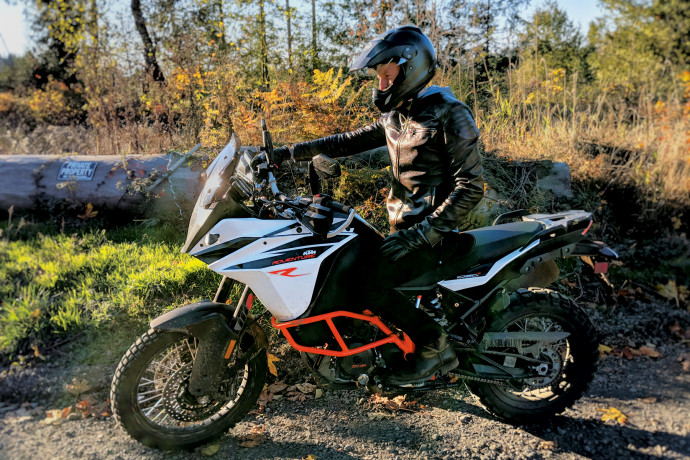 His unique combination of skills impressed SurveyMonkey, a global leader in online survey development tools. He joined the company’s Portland office, located in the city’s iconic “Big Pink” skyscraper, in 2015. Initially, he worked as a sales support specialist, but his initiative and talent helped elevate him to software engineer. One of his most interesting projects involved thwarting scammers from sending out “phishing” surveys, which trick consumers into providing personal information like passwords and credit card numbers. His team integrated artificial intelligence with platform abuse prevention tools, allowing SurveyMonkey’s software to continue learning as scammers changed their techniques.

“SurveyMonkey went public in fall 2018 but maintains the vibe and flexibility of a start-up,” says Owen. “The culture is incredibly supportive and encourages employees to grow and try new things, even if they sometimes fail.”

Owen discovered a similar culture as a student at Lewis & Clark. Initially interested in the philosophical side of psychology, he fell in love with neuroscience under the guidance of psychology professors Yueping Zhang and Brian Detweiler-Bedell. His senior thesis examined the effects of alcohol consumption on the behavioral development of adolescent zebra finches learning to sing.

“Brian introduced me to the beauty of data and statistics,” says Owen. Detweiler-Bedell also encouraged him to get involved with the college’s budding entrepreneurship program. During his senior year, Owen, along with four classmates, created a plan for a brewery start-up called Arbella Brewing Company. The team secured a grant to buy equipment and sold beer at Portland-area events but eventually shuttered the company as members moved on to other projects. “Realizing how much fun it is to build something from scratch sparked my creativity. It was one of my most valuable experiences at L&C.”

Owen continues to embrace an entrepreneurial mindset today. His latest project is savviest.com, a digital start-up under development with his former classmate Justin Midyet BA ’13. Their web-based venture is designed to help job seekers build resumes and cover letters tailored specifically to each job application.

“Savviest.com grew out of the frustrations that plagued our peers applying for multiple jobs,” says Owen. “The platform uses artificial intelligence and machine learning to make the process less painful and more effective.”

When he’s finished traversing the country on his motorcycle, Owen will head to San Diego to join his girlfriend, Alicia Callejo-Black BA ’14, who’s enrolled at the UC San Diego School of Medicine. He imagines himself catching a few waves before securing another tech job.

“Wherever I land, I look for projects and causes that are meaningful and worthwhile,” he says. “The bigger or hairier the problem, the more options there are to solve it. Technology can be endlessly elegant and creative.”