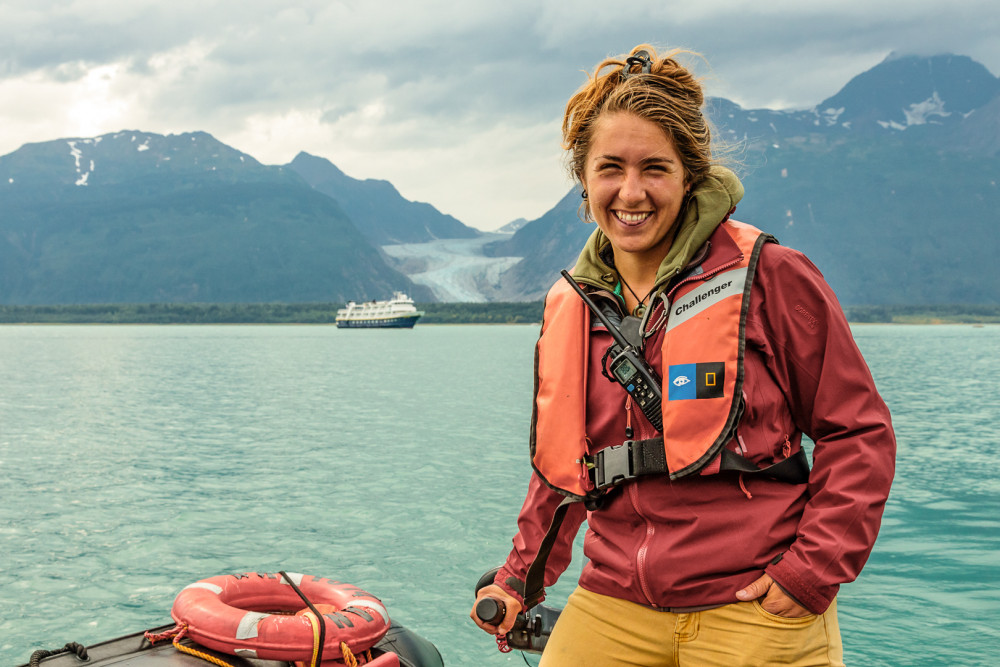 Julia Huggins BA ’13 graduated from Lewis & Clark as a biology major with a vast array of experiences. Ask her what she’s up to and she’ll say she’s a “biogeochemistry philosopher of environmentalism.” Since graduating, she has led expeditions for National Geographic, conducted research in Patagonia’s temperate rainforest, and started a nonprofit to give more kids access to the outdoors.

“I tried to take as many courses as I could at Lewis & Clark that didn’t fit into a clean little box, and I continued that after I graduated,” Huggins said.

“She took some courses that were way out of her comfort zone, but on material she was curious about. She had confidence that she could learn new things. She knew that it would take time and effort, but also that she could do it.” - William Swindells, Sr. Professor of Natural Sciences Paulette Bierzychudek

Huggins has just been awarded the Vanier Scholarship to continue her PhD in biogeochemisty at the University of British Columbia (UBC), which she began in 2017. Referred to colloquially as the “Rhodes Scholarship of Canada,” this highly selective award attracts doctoral students from all over the world who demonstrate both leadership skills and a high standard of scholarly achievement. Nominated by UBC, Huggins will receive $50,000 a year for the next three years to fund her research on oxygen loss in the oceans and the environmental impacts of marine microorganisms.

Huggins’s resume reflects her passion for combining academic rigor with deep explorations in the field. So it’s not surprising that, within six months of starting at UBC, she was promoted to chief scientist of the university’s oceanography research program. She is responsible for coordinating expeditions to study the marine environment.

“What I saw in Julia was the willingness to not take the packaging we put on environmental issues. To reweave it in an interdisciplinary manner was going to be her job, and that’s daunting.”

“She was a catalyst for more students to get involved in environmental education,” said Director of College Outdoors Joe Yuska. “She had a spark that was just contagious to the students that went on trips with her … She had an amazing way of explaining concepts to make them simple.”

Her experience with College Outdoors also helped Huggins to quickly move up the ranks with National Geographic Expeditions, becoming the youngest member of the team. As a lead naturalist, Huggins hopes to incorporate oceanography research into her future trips.

Huggins grew up in a supportive family that faced numerous financial hardships. Challenged by dyslexia, she did not always think of herself as a high achiever in the sciences. Grateful for the scholarships and internships that allowed her to attend Lewis & Clark, she says that working closely with faculty and the community led her to explore and discover new dimensions of the world and herself.

“The support I got at Lewis & Clark enabled me to get to this point of being a high achiever,  competitive, and the winner of these prestigious awards,” Huggins said. “The relationships I had with professors who got to know me on a really individual level and taught me in inspirational ways, the fellowships that gave me opportunities to travel and study abroad … all of those things built my résumé that led me to National Geographic and grad school and now the Vanier.”

At Lewis & Clark, Huggins immersed herself in the college’s many opportunities for experiential learning. With funding from the Stephanie Fowler and Irving Levin Summer Internship Award, she spent a summer working on the Amazon CoRenewal Project in Ecuador, using bacteria and fungi to remediate terrestrial oil spills. She also spent her senior year working in Professor of Biology Peter Kennedy’s fungal ecology lab, researching the relationship between trees, fungi, and bacteria in Pacific Northwest temperate rainforests.

“What made Julia a joy was her relentless curiosity and hunger to get to the bottom of things. Every class involved her questioning the readings, herself, and me. For a professor, teaching is a form of learning and to have a student like Julia means you are constantly being pushed and questioned.” - Associate Professor of Philosophy and Department Chair Jay Odenbaugh

Since graduating, Huggins has not feared straying from the academic track. She was inspired by her experience in temperate rainforests on L&C’s New Zealand overseas program to explore Patagonia, studying the undocumented fungal ecology in the region’s rainforests. She also interned at Tatoosh School, a nonprofit that teaches biology on sea kayaking trips in Southeast Alaska, and helped found Bus for Outdoor Access and Teaching (BOAT), a nonprofit dedicated to making the outdoors more accessible.

Although she has not yet decided on what she will do after completing her PhD, Huggins’s passion for teaching and research shines through. She knows she will use her position and privilege to give opportunities to others who wouldn’t traditionally be in the sciences.

“Everybody’s afraid that if you don’t have a plan or if you step out of the academic world for too long that you can’t get back into it, and I have the complete opposite experience,” Huggins said. “So long as you’re spending that time constructively and following what you are actually passionate about at that moment, it doesn’t matter if it fits into the overarching ‘this is what you should do to be a successful, competitive person.’ Follow what you are excited about. I think that people later see that as a strength, no matter what skill set and field it was in. Throw yourself 110 percent into something, and you are way more likely to succeed at it because you are doing it out of passion.”