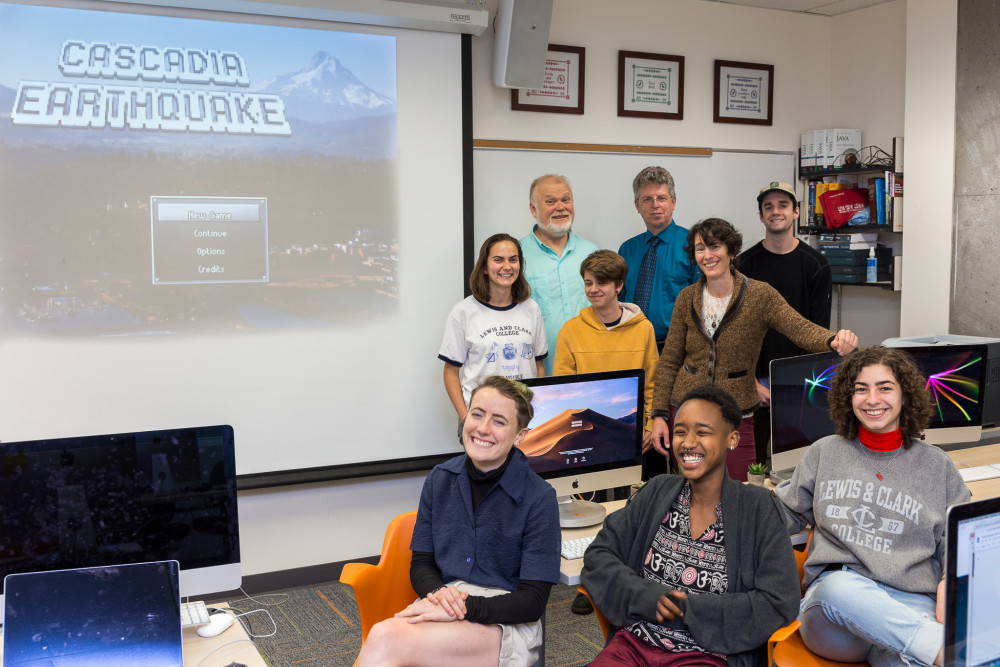 Every region is prone to natural disasters: tornadoes in the Midwest, hurricanes in the Coastal South and East Coast, earthquakes along the West Coast. While the Pacific Northwest’s Cascadia Subduction Zone has long been recognized as having the potential to cause a massive  earthquake, much of the region remains dangerously unprepared. The National Science Foundation (NSF) has awarded a four-year grant of $559,617 to faculty from four Lewis & Clark departments to address part of this problem: they are designing a video game and studying its capability to educate and motivate young people to get ready for such an event.

Students and faculty have been collaborating on the preliminary stages of the project for several years with support from the John S. Rogers Science Research Program. It will expand significantly when NSF funding begins in September. The project is the brainchild of Associate Professor of Geological Science Liz Safran, who teaches a class on natural disasters.

“We don’t really have a culture where we appreciate that this sort of disaster is part of the place where we live, so I became interested in attacking that piece of the problem,” Safran said. “Disaster preparedness is often treated as a public health issue. People want to message it in the same way as other public health issues, like drunk driving or condom use, with simple prescriptions that apply to everybody, but the ways that are available for you to get prepared vary depending on your circumstances.” 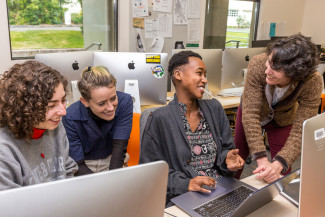 Geologist Liz Safran with students on the project team.“We wanted to work with a medium where it was more about solving the particular problems that you need to solve and less about offering prescriptions, do this or do that,” Safran said. “Video games seemed like a good medium because they’re all about problem solving.”

The project is aimed toward young adults aged 18–29, a traditionally under-messaged group in this region. The team recognizes that young people have a lot of untapped potential to aid in this kind of disaster; however they are often weighed down by financial insecurity or their lack of control over their living environments. By making the video game free and accessible to everyone, the hope is that it can be an effective way to better prepare this age group and counteract some of these vulnerabilities.

“What’s unusual about this project is that while we hope to release a game at the end that anybody can play and use to become better prepared, along the way we are also using the game to study how effective it is at educating people,” Drake said.

Over the course of the four-year project, there will also be curricular tie-ins to courses like Software Development, (Un)Natural Disasters, and Human Computer Interaction. Additionally, the grant will fund hiring more than 45 L&C undergraduate students throughout the years.

“The big thing is that we will be able to support a lot of student researchers. Having so many undergraduates involved in research is not something that all colleges like us do, but it is a huge tenet of Lewis & Clark,” Drake said. “It’s a valuable experience for students because in a class, you’ll usually work on several small projects and the professor already knows the answer—you walk on ground that has been walked on before. But when you are doing research, there are all kinds of messy details that go into it that make it a more realistic experience.”

Four students are already working on the project this summer, funded by the Rogers program. Two psychology majors, Natalie Casson BA ’20 from Williston, Vermont, and Elise Gilmore BA ’20 from Del Mar, California, are analyzing the survey data collected thus far. Peter Huizenga BA ’20, from Norwich, Vermont, and Liza Clairagneau BA ’21 from Rwanda, both computer science and mathematics majors, are involved in designing and creating the game. This is Huizenga’s second summer working on the project.

“One of the cool things about this project specifically is that it’s very interdisciplinary,” Huizenga said. “I spend a lot of my time at L&C studying computer science and math, but I have learned a lot about geology and psychology working on this project.”

The team recently presented their research on July 9, as a part of the 2019 Rogers Brown Bag Presentation series. The schedule for upcoming talks about other Rogers-funded research can be found here.