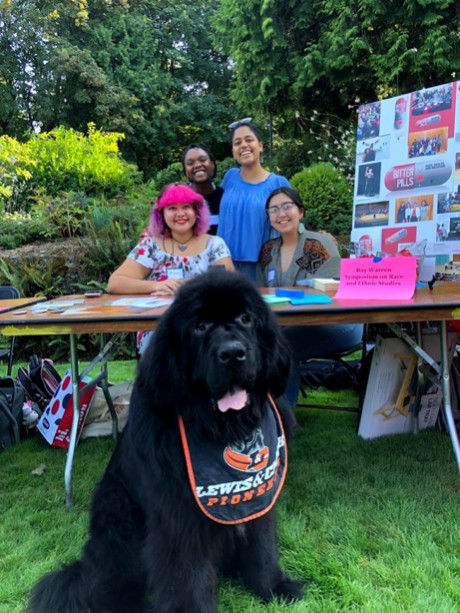 For nearly two decades, the student-run Ray Warren Symposium on Race and Ethnic Studies has deconstructed the origins and effects of racial power in America, highlighting issues such as race and medicine, the legacy of colonialism, and what it means to be at home in a nation divided. Free and open to the public, this year’s symposium draws on questions of years past to look forward and investigate where exactly we are meant to go from here. The symposium runs from November 13 through 15.

The theme, Beyond Resistance: Race and Revolutionary Struggle, encourages audience members to rely on their sense of imagination and vision. What would a non-ideological, non-hierarchical society look like? What is missing in our current state of activism, and is it time to reframe what we consider revolutionary? To engage in this critical dialogue are three keynote speakers, two of which have yet to reach voting age.

High school students Feliquan Charlemagne and Irsa Hirsi spearheaded operations for the U.S. Youth Climate Strike; Charlemagne as the national creative director and Hirsi as the cofounder and coexecutive director. They will team up for a presentation on environmental justice.

The second keynote presentation will come from Jackie Wang, an African American studies PhD candidate at Harvard University and author of the recent book Carceral Capitalism. Wang will interpret “beyond resistance” through the prison industrial complex, asking audience members to think critically about mass incarceration in America in the context of anti-black racism.

“The spirit of this year’s symposium intends to invite everyone to engage in utopic, radical thinking and explore systemic change that starts at the community level, in the house, and on the street,” says Jacobs, a sociology and anthropology major with an ethnic studies minor, originally from Morristown, New Jersey. “Every year the symposium intentionally welcomes the Portland community to become a part of the experience not simply through invitation, but through panel topics and workshops that engage Portland activists, academics, and artists.”

Like the other three signature student-led symposia held each year (the International Affairs Symposium, the Gender Studies Symposium, and the Environmental Affairs Symposium), the Ray Warren symposium allows students to engage in conversations they might not have had otherwise, says Gurrola, a sociology and anthropology major from Bellevue, Washington.

“I find the symposium to be immensely valuable, especially on a predominantly white campus,” she says. “There can never be enough conversations on race and ethnicity, it is completely and utterly necessary.”

As is tradition, the Ray Warren Symposium will conclude Friday evening with the Race Monologues in Agnes Flanagan Chapel. For many members of the Lewis & Clark community, the monologues—where a collection of students speak on their personal experiences of race, ethnicity, and identity—are the high point of the symposium.

“That space is so sacred to the students of color on campus,” says Ontario, California, native Magaña, who is majoring in rhetoric and media studies. “It’s a way to allow these students the opportunity to say what they need to say in a controlled environment that caters to them.”

For Gurrola, the symposium is a valuable opportunity for students to listen and exercise empathy. “Even though most students don’t remember or know who Ray Warren was, we still feel his warmth and his legacy,” she says. “The symposium is in his honor but also acts as a vital moment in which students grow and learn.”

The symposium began in 2004 as a way to honor Ray Warren BS ’65, MAT ’71 who served as associate dean of students and director of ethnic student services until his death in 2004. A tireless advocate and careful listener, Warren left a lasting impact on students and colleagues alike.

Office of Inclusion and Multicultural Engagement