‘The Christians’ Engages With Modern Insurmountable Clashes of Conviction 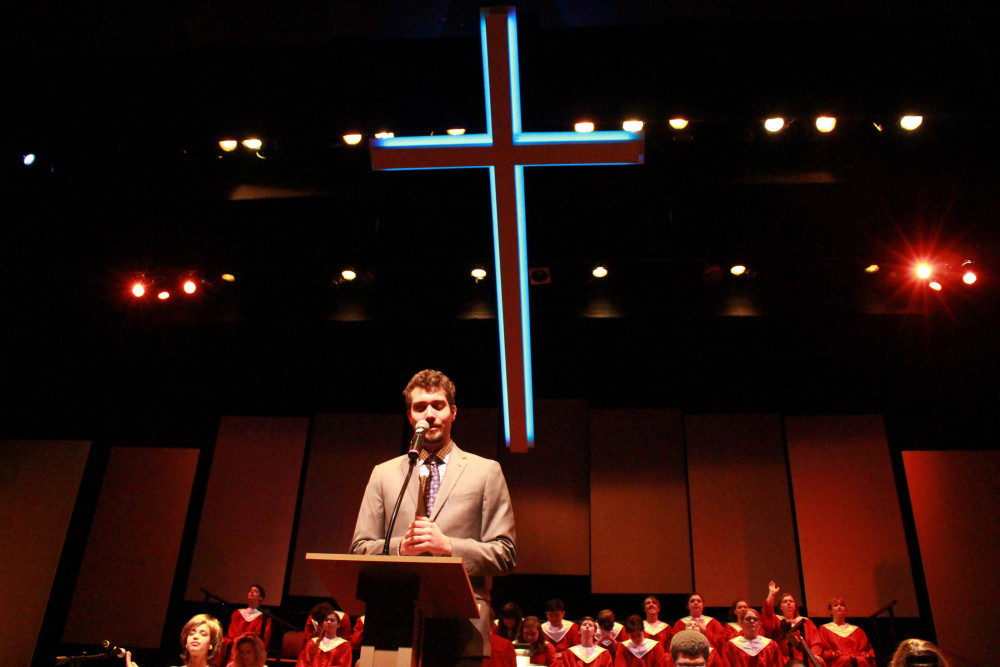 Faith, conviction, communication, truth, community. The Christians, presented by the Lewis & Clark theatre department in collaboration with the music department, analyzes how these topics converge in modern American society. The thought-provoking play, written by Lucas Hnath, follows Pastor Paul—head of a megachurch in the United States—as he tries to bridge the increasing differences between his personal faith and that of his congregation.

“The foundation of this underlying tension of the production can best be described by Paul’s line, ‘I have a powerful urge to communicate with you, but I find the distance between us insurmountable,’” said Milwaukee, Wisconsin, native Evan Howell BA ’20. The theatre major plays the lead, Pastor Paul. “The play explores the fundamental conflict of the ever-present urge to communicate our ideas, beliefs, and intentions that weaves and bleeds among intrapersonal, interpersonal, and spiritual scales.”

Professor of Theatre and Director Štěpán Šimek has wanted to bring this play to Lewis & Clark ever since he first saw it with students on the 2015 New York off-campus program. He hoped the intriguing topics examined in the play would spark discussion among students and create a space for students to confront their own beliefs and convictions.

“The Christians made the strongest impression on all of us, and I wanted to direct it ever since. The listening and thinking energy of the audience was so palpable that I could literally feel it in my bones,” said Šimek. “The play lends itself to a very detailed, intellectual as well as emotional exploration, and that is something that I feel our students should be exposed to.”

The Christians is the first performance at Lewis & Clark to be integrated into the core curriculum. This interdisciplinary activity will encourage students to engage with the play both as audience members and after as they take the big ideas discussed in the performance back to the classroom for critical analysis. 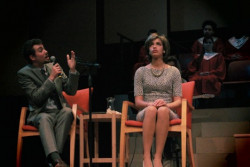 Credit: Eva Magaña BA ’20“The debates and the impossible-to-solve questions in the play are so clearly articulated that audiences have to engage with them,” adds Šimek. “It does everything that the theatre should do: it raises important intellectual, spiritual, ethical, and political questions; it delves deeply into the tradition and the art of the theatre; it uses every artistic element available to the stage; and it makes us both think and feel.”

The cast members agree that the play is provocative and has challenged their own assumptions and worldviews.

“I was immediately drawn to the ideas of the play and the language that Hanth uses to explore them. The show is built around these central themes of belief, communication, faith, and interpretation,” said rhetoric and media studies major Olivia Matthews BA ’20. The Pasadena, California, native plays Elizabeth, Pastor Paul’s wife who has to reckon with her shifting relationship to both her husband and to her community.

Marley Ridgill BA ’20, a biology major from Whittier, California, is participating in a Lewis & Clark production for the first time. Wanting to be more involved in her final year at L&C, Ridgill decided to audition for the play. She has enjoyed seeing the creative process and learning how to tackle difficult topics through theatre.

Says Ridgill: “My favorite part has been our rehearsals at which the choir is also present. The music raises the emotional stakes, and this gets me excited all over again for our performance.”

To reinforce the sermon-like structure of the play, a 23-member choir backed by a church band, accompany the actors on stage. The incorporation of singers and instrumentalists adds depth to the performance and creates the same atmosphere that would be present in a church like the one where the play is set.

“The role of the choir in a church setting is one of the main ingredients in influencing the emotional direction of the service in general and the readings and sermon more specifically,” said Choir Director Susan McBerry. “Most churches welcome every person into the musical fold. The Christians’ choir is made up of a few voice majors, lots of people who love to sing and have experience, and some members who have never sung before.”

“I can’t shut up about this play. The ideas that are present and the questions it raises not only about religion but as society as a whole could be discussed for hours on end,” said San Mateo, California, native and theatre and political science double major Amanda Masini BA ’22. In her role as Sister Margaret, she engages directly with Pastor Paul about his changing views. “The most important thing I get from this play is that there is no right answer. There is no villain in this play, only conflict between two goods.”

The show opened Friday, November 1. Performance dates, tickets, and other information can be found on the Fir Acres Theatre page.