Lewis & Clark’s Special Collections and Archives is featuring a retrospective exhibit on the early 20th-century Bauhaus movement in Watzek Library. Curated by German studies students Scott Stewart-Rowdan BA ’20 and Jack Hanning BA ’21 and Professor of German Studies Therese Augst, this exhibit features replicas and models of Bauhaus furniture, jewelry, and crafts, along with Augst’s research on the Bauhaus weavers and Josef and Anni Albers.

The Staatliches Bauhaus was a German art school and intentional community founded in 1919 by German architect Walter Gropius in Weimar. Gropius wanted to build a utopian community as a response to the trauma of World War I. The Bauhaus philosophy was based in regaining control over technology and harmonizing modern life by creating buildings, art, and crafts with one’s own hands and in communion with other people. 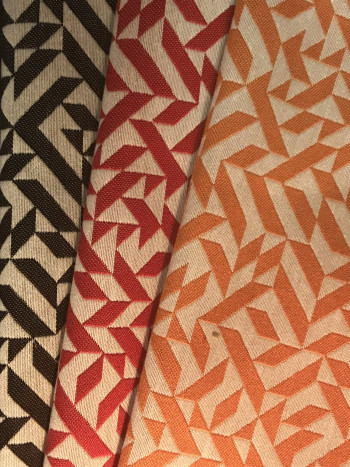 Bauhaus is famous for its ultramodern, utilitarian aesthetic and innovative approach to art education that helped shape modern design. Bauhaus also had a theatre program, a jazz band, and many other communal activities that were crucial to its mission.

“In many ways the Bauhaus was a community more than it was a school, wherein artists influenced each other and synthesized a style of their own,” Stewart-Rowdan said. “The Bauhaus’s lasting influence is arguably more a result of its personalities and the community they formed than the art they made.”

After 14 years of operation, the Nazi regime forced the Bauhaus to close, but its aesthetic and pedagogy lived on. Gropius and Bauhaus student-turned-master Marcel Breuer went on to teach at Harvard Graduate School of Design and reshaped the way the school taught design. The Bauhaus aesthetic influenced furniture design that can still be seen at stores like IKEA and Crate and Barrel.

“Bauhaus brought modern design to mass-produced products,” explained Augst, “so just because something is inexpensive doesn’t mean it has to be shotty or boring or ugly. It can be highly functional, innovative, beautiful, and affordable.”

Hanning and Augt’s research is focused on the women of the Bauhaus. “The Bauhaus was progressive for the time, but certainly underestimated women,” Hanning said. “The way the Bauhaus women reacted by creating their own space is fascinating and impressive.”

Augst explained that only one of the original Bauhaus teachers was female and she ran the weavers workshop. The weavers created complicated and beautiful designs that honored their materials. Replicas of Bauhaus textiles can be found in the exhibit along with a mini-model of a Marcel Breuer chair, an anti-war chess set, a children’s toy, a tea and coffee set that was designed in the metal workshop, and jewelry made of hardware by Anni Albers. There are also myriad facsimiles of Bauhaus publications. L&C students and other members of the community had the opportunity to explore the exhibit and recreate some of the crafts at the opening reception on October 3.

“I was excited to see how many students stopped by the reception to check out the exhibit, learn about the Bauhaus, and try out the Bauhaus-inspired craft projects,” Augst said. “After all, the Bauhaus was a creative and academic community, and its students were not that different from Lewis & Clark students—they were also motivated by the opportunity to learn together, to have interesting experiences, and to build a better world.”