On any given summer evening, the Portland Mercado is a swirl of activity: families eating Cuban sandwiches, Mexican tamales, or Puerto Rican mofongo at nearby food trucks; bands playing on the patio; people doing their evening shopping at the meat market and grocery store. 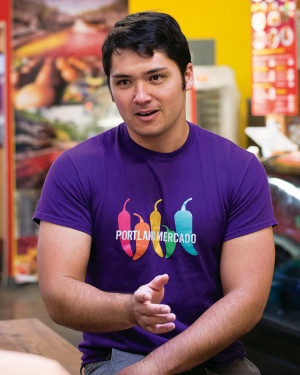 A combination commissary kitchen, food court, mini mall, and Latinx cultural center, the Mercado in Southeast Portland is home to dozens of businesses. And Chris Bailey BA ’08 has had a hand in launching many of them.

On a Monday in late July, Bailey was right at home among the hubbub, shaking hands and slapping shoulders while calling out to shopkeepers, cooks, and colleagues. As a microenterprise developer for the Mercado, Bailey provides product development and business coaching to as many as 50 entrepreneurs starting or expanding food businesses each year. He helps his clients with skills he acquired developing his own food business, Pozole to the People.

Bailey’s connections to the food industry run deep. He spent much of his childhood in the Thai restaurant his mother and aunt ran in Oahu, napping in the office and hanging out in the kitchen. His aunt ran the kitchen while his mother managed the front of house. His father, who worked at the nearby Pearl Harbor shipyard, was a regular.

“That’s where both my passion for food and small business really came into play,” Bailey says.

But when Bailey moved to Oregon—drawn by Lewis & Clark’s congenial vibe and the presence of family—entrepreneurship was the last thing on his mind. Instead, he studied English.

“I always thought I was going to write the next great American novel,” he says, “but I think that was my collegiate hubris.”

Pauls Toutonghi, associate professor of English, says Bailey is “a terrific example” of what it takes to persist and thrive while undertaking creative projects. “Chris demonstrates the type of thinking that characterizes an L&C education—inventive, open-minded, and always looking for new problems and solutions.” 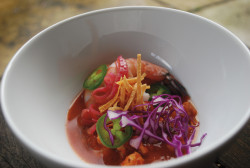 “Chris’ approach to his field has shown his remarkable initiative and creative thinking: he’s always asking, ‘How can I leverage this asset and propel myself toward the next destination?’ It’s an instinctual thing that entrepreneurs possess. Writers possess it, too, as they plan their projects and look to place them with publishers or magazines.”

After graduation, Bailey returned to Oahu and was hired as an editor at Hawai‘i Magazine. “I was quite fortunate,” he says. “I think I found myself at my desk, writing.” He enjoyed the work and the adventurous assignments, which included diving and parasailing, but 2008 to 2010 were difficult years for media. “It seemed like the news business was always getting more dire: hiring freezes, page reductions, tight ad sales.”

Soon, Bailey felt the pull to return to the mainland and the kitchen. He left the magazine, moved back to Portland, and took a job in the kitchen of Clyde Common, a popular downtown restaurant. He started on the kitchen’s back line, prepping vegetables, plating desserts, and “just running the whole time.” He also prepared the staff meal after the close of regular service.

“For someone new in the industry, having to serve the staff meal for a team of chefs and bar professionals was intimidating,” Bailey says. “But it was fun. It was good learning. It was humbling.”

One of the meals Bailey prepared for his coworkers at Clyde was pozole, soup made with hominy, chilies, and often pork that’s ubiquitous in much of Mexico and the American Southwest. Bailey’s father, who grew up in Arizona, brought his love for pozole to Hawai‘i, and it was a favorite dish of Bailey’s childhood.

Portland is progressive in many ways, but it’s not exactly known for its diversity. I love that I meet and get to interact, day in and day out, with these really passionate makers from all backgrounds and from all sorts of different countries … Haiti, Puerto Rico, Portugal, Somalia.” Chris Bailey BA ’08

“It’s something that symbolized community,” Bailey says. “Here in Portland, there are a lot of great restaurants that serve it, but whenever I’d go out to eat with friends who didn’t eat meat, it was always a barrier for them.” He conceived of a meatless soup base—adaptable to most diets—that would pack all the flavor of a long-simmered pozole without the many hours of work over a hot stove.

To make his vision a reality, Bailey started learning all he could about crafting a business plan. He took classes with Mercy Corps Northwest, a nonprofit that fosters small businesses to develop resilient communities, and Portland Community College’s Getting Your Recipe to Market program, a partnership with Oregon State University’s Food Innovation Center. It was during the latter course that he learned about the Portland Mercado, then still in its planning stages.

While learning the ropes of the prepared food business, Bailey kept moving through the restaurant industry, becoming sous chef at Din Din, a roving supper club, and later joining Dinner Lab, a New Orleans–based start-up that presented pop-up dinners for subscribers across the country. Ultimately, Dinner Lab’s business model wasn’t sustainable, but he benefited from two years of traveling and cooking with them.

In 2016, Bailey returned to Portland and pozole. By then, the Portland Mercado had opened on the site of a former used-car dealership on Southeast Foster Road. Bailey became a tenant in its commissary kitchen, splitting his time between testing other people’s recipes as a research chef at the Food Innovation Center and refining his own product. By the end of the year, Pozole to the People was available at New Seasons Markets in Oregon.

The more time Bailey spent at the Portland Mercado, the more he was drawn to its mission. The organization was created by Hacienda CDC, a community development corporation that provides affordable housing for more than 1,600 people around Portland. The Mercado was developed to provide a space for the Latinx community that Hacienda has fostered in its housing to build wealth through entrepreneurship.

In 2017, when the Mercado had an opening for a dedicated staff member to help small businesses get off the ground, Bailey jumped at the opportunity to share the knowledge and skills he’d gained launching Pozole to the People. Since then, he’s helped dozens of other entrepreneurs get their food products into grocery stores.

Mathilde Aurelien-Wilson is one of those entrepreneurs. Originally from Haiti, she moved to Portland with her two teenage children six years ago, after stints in Cuba and the U.S. Virgin Islands. Finding no Haitian food in the city, she decided to make her own. She began cooking at farmers markets, then opened food carts on Northeast Alberta Street and the Portland Mercado, serving goat curry, pickled cabbage, roasted plantains, and a popular hibiscus ginger drink. 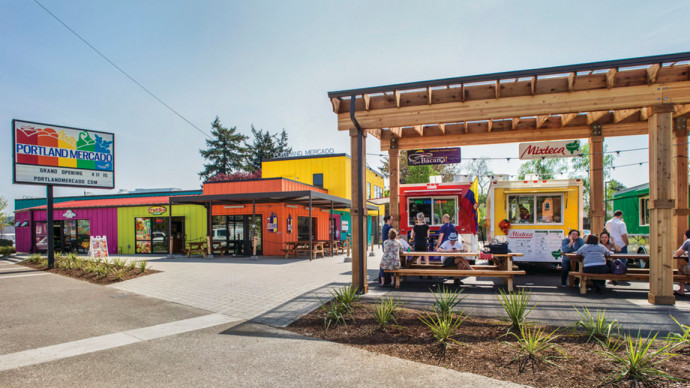 The Portland Mercado brings together diverse cultures through food, art, and entertainment.

“I had people coming from Seattle, from Salem, from Eugene. They would drive all the way just to eat here. It was the only Haitian food in the area,” Aurelien-Wilson says. “I wanted to learn to package, and I went to Portland Community College to take the Getting Your Recipe to Market course. That’s where I met Chris.”

Bailey worked with Aurelien-Wilson to refine her recipe and write a business plan for Mathilde’s Kitchen Hibiscus Flower and Ginger Brew. At the end of the course, students presented their proposals to New Seasons Market, the sponsor of the program. “They accepted my proposal right there,” Aurelien-Wilson says. “From that day, Chris continued to work with me. When I needed to improve the quality of my beverages, he helped me to test them and find the right ingredients. He guided me through all the networks in Portland and beyond.”

Ingredients for a Successful Food Business

Start with your passion: “We have so many products being made at the Mercado that have a strong cultural context,” says Bailey. “My first product, Pozole to the People, came up through a family recipe. It was an integral dish of my community. I grew up with it.” 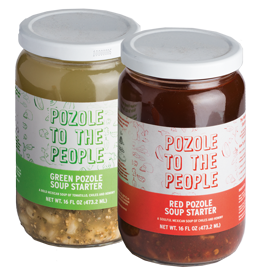 Do your homework: Years before he launched Pozole to the People, while he was still working in restaurant kitchens, Bailey took classes on the food business. “Sometimes I had to tell my chef, ‘Hey, can I leave early? I’ve got this commitment.’ And he’d ask, ‘Wait, where are you going?’ But it was imperative for me to take those classes to learn about crafting a business plan.”

Know your product: “I always advocate for spending a year making your product on your own. Developing an intimate understanding of your product enables you to troubleshoot a lot better than, say, if you take your small stovetop recipe and go full capacity.”

Ask for help: “When I was in Hawai‘i as a writer with a passion for food and a seed of desire to start a business, the resources seemed a lot harder to find. In Portland, resources are everywhere. It’s just about learning to navigate them.”

Bailey says food businesses like Aurelien-Wilson’s can be a strong pathway to self-sufficiency for communities of color. “Entrepreneurship is one of those rare opportunities for building multigenerational wealth,” he says. “I think about my mother, who came to Hawai‘i as a teenager. She and her sister were able to carve out paths for themselves that not only supported my family but also provided the means for me to go to Lewis & Clark.”

In addition to the opportunity for building wealth, Bailey says the universality of food creates visibility for communities of color. “The Mercado has become, in addition to a launchpad for so many businesses, a great place for cultural conversations,” he says. “Portland is progressive in many ways, but it’s not exactly known for its diversity. I love that I meet and get to interact, day in and day out, with these really passionate makers from all backgrounds and from all sorts of different countries … Haiti, Puerto Rico, Portugal, Somalia.”

Through it all, Bailey has kept right on building his own business. He acquired another product line, a dairy-free caramel sauce called Bloom Caramel, which went on to win a Good Food Award in 2019. Currently, he’s working to develop seven new products with New Seasons, including sauces and condiments.

Bailey continues to seek out opportunities to share his expertise with other entrepreneurs. He serves on the board of Built Oregon, an industry group that trains and supports small businesses making consumer products. Each winter, he returns to his high school on Oahu to teach a short course on entrepreneurship with one of his former English teachers. And earlier this year, he served as a roaming mentor for Lewis & Clark’s Winterim program. Winterim is an immersive week between fall and spring semesters designed to develop students’ entrepreneurial and leadership skills.

“In addition to being a valuable nexus to the start-up community, Chris has a grasp of underrepresented groups’ unique challenges,” says Chrys Hutchings, associate director of the John E. and Susan S. Bates Center for Entrepreneurship and Leadership. “Winterim students really liked his vast knowledge, empathy, and humble disposition. And just recently, he connected with a young alumnus about alternatives to bank financing for his start-up. Chris truly cares about the next generation —he represents the liberal arts in action.”

In 2018, Bailey was one of four recipients of Willamette Week’s Skidmore Prize, an award honoring people under the age of 35 doing transformative work at nonprofits in the Portland area. It’s a prestigious honor in a city with a strong culture of community service.

“I’m so fortunate to be a part of this project,” he says. “I want to shine the brightest light possible on the Mercado and everything it’s about.”

Ben Waterhouse BA ’06 is a journalist and editor in Portland.