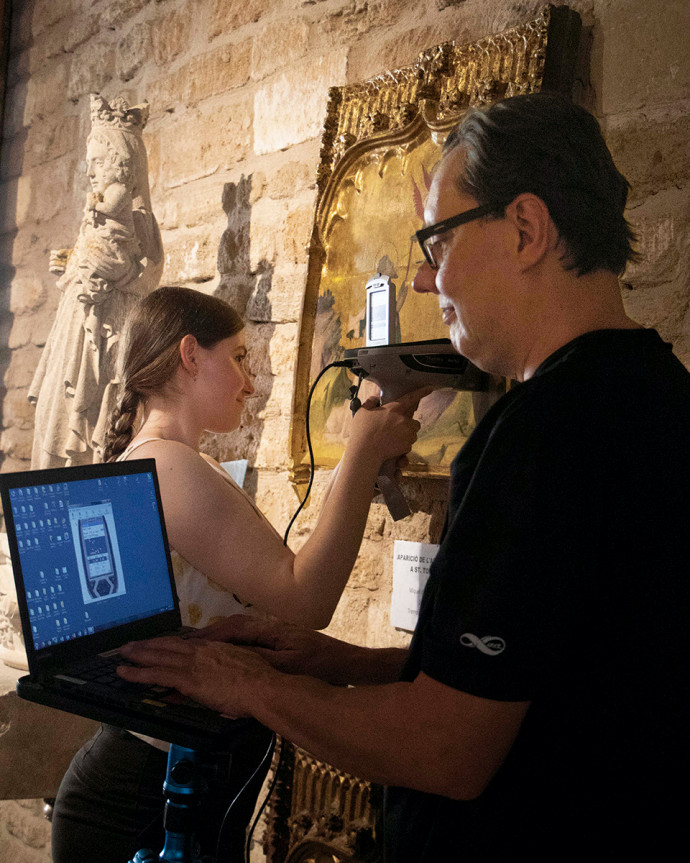 Using portable laser and X-ray equipment, Professor of Chemistry Julio de Paula and Genie Rose BA ’20— along with collaborators from the University of Portland —collect detailed information on the pigments of 15th-century church paintings.

A pair of 600-year-old religious paintings that hang in the Church of St. James in Alcúdia, Spain, have seen their share of history.

Even centuries after their creation, the paintings, which depict events in the life of Mary, are striking. The gold backgrounds, rich blues, and bright reds still catch the eye. With the help of determined Lewis & Clark researchers—and some 21st-century technology—their secrets are being coaxed into view.

Using delicate, portable laser and X-ray instruments that they positioned just fractions of an inch from the paintings, Professor of Chemistry Julio de Paula and Genie Rose BA ’20 spent five weeks this past summer collecting detailed information on the pigments contained in the paintings. They searched for clues about the chemical composition of the pigments and analyzed their findings to learn whether or not the paintings had been restored.

“When I was a kid, I always heard that archaeology was a cool way to study history in a more realistic setting, as opposed to just from a history book,” says Rose, who jumped at the chance to do chemistry-linked work outside of a lab. “I never thought I’d have the opportunity to do archaeology as a chemistry major.”

Thanks to funding from the John S. Rogers Science Program and the Research Corporation for Science Advancement, de Paula and Rose were able to visit Alcúdia firsthand to chemically analyze the centuries-old paintings.

As part of the summer project, the pair also had a chance to study other ancient artifacts. Alcúdia, on the Spanish island of Mallorca, is home to the ancient ruins of Pollentia, a city founded two millennia ago. When Rose wasn’t analyzing the paintings, she was digging for bones, pottery, and other artifacts in Pollentia’s ancient graveyards.

This past summer, de Paula, Walters, Rose, and University of Portland student Bryan Hunter all collaborated on the summer’s activities.

“Though we do chemical analysis of artifacts, paintings, and other relics from the excavation, the main focus of my work is analysis of pigments from [the church’s] paintings,” de Paula says.

Deploying chemistry in the service of art and art history, de Paula says, can help researchers paint a picture of how these ancient artists worked. 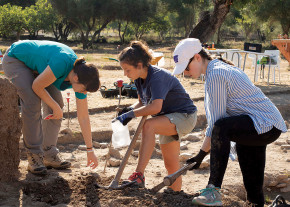 Students excavate bones, pottery, and other artifacts in the ancient ruins of Pollentia, a city founded more than two millennia ago. Credit: Sarah de Paula

Research projects like the one completed by Professor Julio de Paula and Genie Rose BA ’20 are more than just summer projects: they exemplify the liberal arts in action. Such projects bring together wide-ranging ideas, programs, and disciplines into a rich, meaningful experience.

“My students and I are exploring ways to connect with disciplines that some folks may find completely disparate. What does art history have to do with chemistry? What does using X-rays and lasers on paintings have to do with how to think about a painting from its historical or artistic point of view? We’re right at that interface, right at that point of connection, where history, art, archaeology, and science all come together. It’s this connection among several areas of thought that enables us to get a bigger picture of the objects in front of us.”

“Going to the archaeological site in Spain was my first experience doing fieldwork. It required not just adjusting to a new culture and an unfamiliar lifestyle, but also learning to collaborate creatively with a large group of people. I even learned a bit of Spanish by the end. It was an incredibly valuable experience that I will remember for the rest of my life.”

“Julio’s research study in Spain has not only expanded the scope of research opportunities directly available to Lewis & Clark chemistry students, but it has also had an indirect impact on all of us in the department as we learn about the chemistry involved in studying these ancient pigments within the scope of a broader project. His collaborative approach makes him ideal for interdisciplinary work, where it’s important to understand a research question from multiple angles. In both classroom and research settings, Julio sets high standards for his students yet also supports them in meeting, and exceeding, his expectations.”

Before the trip to Spain, de Paula worked with Rose for about five weeks to help prepare her for her first field expedition. To train her on the techniques to be used on the paintings, de Paula directed Rose to evaluate the pigments in an illuminated book of hours from the 15th century. The rare tome, acquired by Aubrey Watzek Library’s Special Collections in 2014, was written in both Latin and French, and features devotional prayers for laypeople. Small, portable, and packed with mystery, the book is a perfect object for interdisciplinary study.

“Genie made a lot of progress by analyzing the pigments in the main illustrations with four chemistry techniques: X-ray fluorescence, near-infrared imaging, visible diffuse reflectance spectroscopy, and Raman spectroscopy,” de Paula says. “We have identified many of the pigments used by the unknown artists. They are all period pigments, so we have not found evidence of restoration that used modern pigments.”

De Paula first began work on the book of hours through a collaboration with Associate Professor of English Karen Gross. Students in the two professors’ courses—Chemistry 365 and English 281—worked independently to make sense of the book of devotional prayers.

“Even though the book of hours is a pretty standardized set of prayers, it was easily and often customized. To those living in the 1400s, the book of hours was like a high-end smartphone—definitely a luxury item that not everybody was fortunate enough to have,” she says. “In this society, if you had enough money, it’s one of the first things you bought. Analyzing Lewis & Clark’s book of hours involves a lot of detective work for students who are trying to figure out the social context of the book.”

“We examined four full-page illustrations in Lewis & Clark’s book of hours to identify as many pigments as we could using the same techniques to be used on the paintings in Spain,” she says. “We did some work with diffuse reflectance spectroscopy, which can help you notice small differences between two colors that are not detectable by your own eyes. We were looking for a specific pigment called Egyptian blue, which we didn’t find. It would have been really interesting if we had seen it, because it’s unlikely that it would have been used by artists in France at the time period the book originated.”

Once Rose arrived in Spain for the five-week summer program, she helped set up a spectroscopy lab at the facility where objects from the dig are cleaned, classified, and cataloged before chemical analysis. De Paula says students are tasked with this work each summer.

After that, Rose began the difficult work of documenting the pigments in two paintings with another student from the University of Portland. They used a variety of nondestructive techniques in the field of spectroscopy, the analysis of the interaction between light and matter. Through spectroscopy, they can determine the chemical composition of the artifacts and paintings recovered. For example, they can tell from their analysis which pigments were used by the 15th-century Mallorcan artists. They can also uncover evidence of undocumented restoration of a painting by identifying more modern pigments.

“One of the interesting parts about doing fieldwork is that you have to learn how to creatively approach a solution,” she says. “Much of the time, we were coming up with different ways to solve simple problems, like propping up an instrument just another inch so that we could get to one specific spot.”

Even more, she says, it was a joy to use her chemistry expertise to unlock a different type of understanding of the art. “I love learning about the different atoms and molecules that make up everything around us and how their properties can explain how things work…like why things are a certain color,” she says

De Paula says that the analysis of pigments in paintings can tell us something about the availability of materials and trade patterns over time. Back in the 15th century, he says, many of the pigments came from minerals, and not every mineral is available everywhere in the world.

“For example, the blue pigment ultramarine is a powder of the mineral lazurite, also found in the semiprecious stone lapis lazuli,” de Paula says. “Because this pigment had to be imported from Afghanistan, it would have been very expensive in the 15th century. The artist’s use of costly ultramarine points to the cultural significance of a painting during that time.”

Rose notes that many of the pigments used in paintings were made from toxic metals, including, for example, lead and mercury. “It would have been incredibly dangerous to be an artist during that time period,” she says. “These artists were working with all kinds of awful chemicals all the time. And yet they made such beautiful art out of them.”

De Paula, who has mentored nearly 60 students in his 30-year career, says that watching students transform into scientists—from designing experiments, to gaining insights, to working on journal articles—continues to drive him. “To witness the transformation of a student into a scientist is the greatest reward of mentoring undergraduate research,” he says.

It is an amazing experience for students like Rose, de Paula says, and exemplifies the unique opportunities of a liberal arts education. “This work is not just about the chemical composition of the pigments; that doesn’t lead you anywhere,” he says. “When you put it in context, in connection with the history of the painting and the cultural significance of the painting to a community, then that’s when the significance becomes broader. It’s immensely satisfying to use chemistry to help folks in Alcúdia understand their history.” 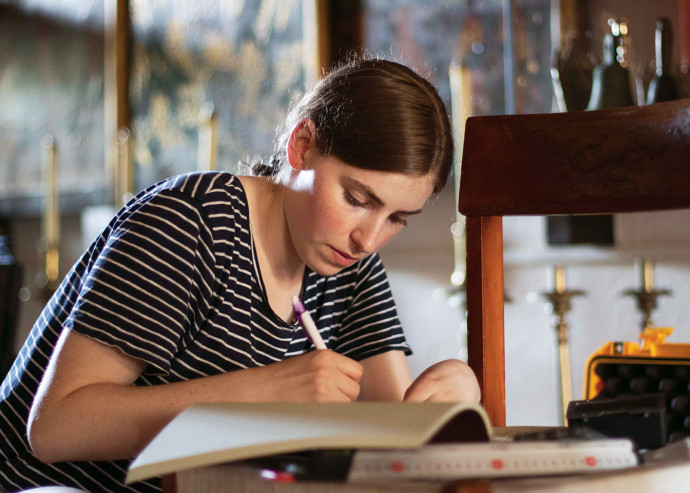