What happens when a correctional facility functions as a classroom? Lewis & Clark history students find out firsthand. 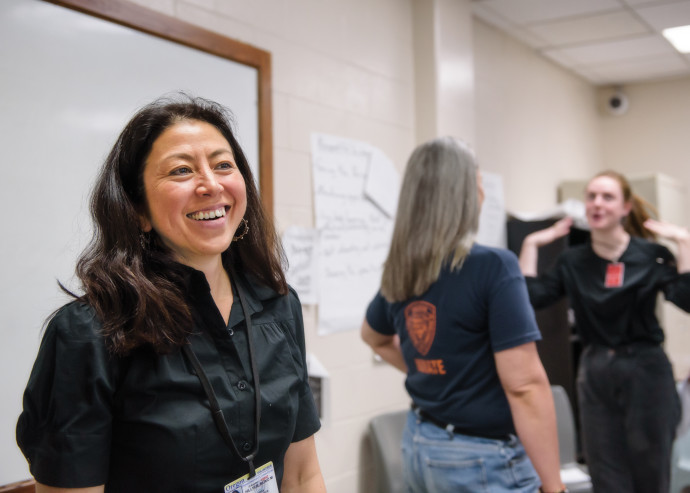 For most Lewis & Clark students, getting to class involves a brisk walk across campus to a familiar academic building. But for students in History 338: Crime and Punishment, it means taking a 30-minute carpool ride to the Columbia River Correctional Institution in Northeast Portland.

Once they arrive at the 600- person minimum-security state prison, they are buzzed through two steel doors and walk alongside a chain-link fence topped with coils of concertina razor wire. They turn over their identification to a sentry, empty their pockets, and stride through a metal detector into a different world.

Inside, a dozen prisoners are waiting, eager to start class. Together, these students are part of the Inside-Out Prison Exchange, a nationwide program that brings together equal parts “outside” college students and “inside” incarcerated students to engage in a semester-long college course. The program offers college classes in a range of subjects in prisons across the country and worldwide. Founded more than two decades ago at Temple University, the program’s slogan is “social change through transformative education.”

The Lewis & Clark course is taught by Reiko Hillyer, associate professor of history. It advocates for a critical reexamination of the criminal justice system and encourages students to educate themselves about America’s booming prison population and the actions that they can take to combat its expansion. The course draws raves from Lewis & Clark students, most of whom have never stepped foot in a prison before taking the class. They come to see it as something much more than another class—it’s a life-changing experience.

“This has been, hands down, the best experience of my time at Lewis & Clark,” says Peter BA ’19,* a sociology/anthropology major. He has been interested in the inequities of mass incarceration since high school and says, “The class is a uniquely powerful, experiential way to learn about the history of the justice system in this country.”

For Hillyer, teaching the class is much more than a job—it’s a professional and personal mission.

“In higher education, we tend to teach history from an academic perspective in somewhat abstract terms,” she says. “I want my students to reach across barriers and connect with their fellow citizens behind bars. Suddenly, the criminal justice system is not an abstraction anymore. Students can start challenging and changing the way things are.” 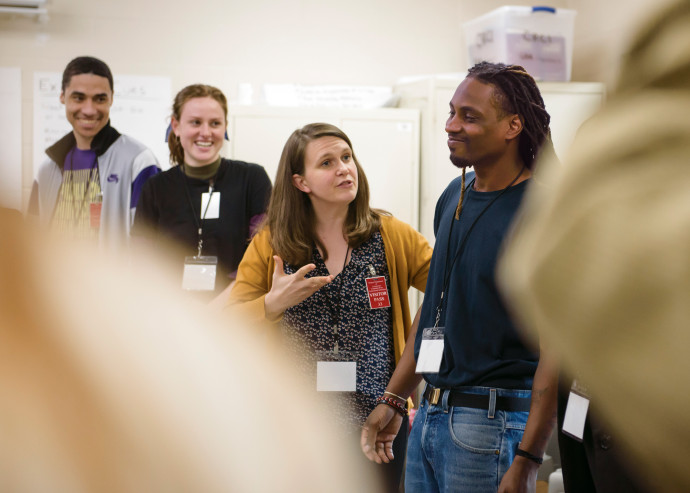 In many ways, the rhythms of Crime and Punishment reflect those of a typical college course. Hillyer’s syllabus includes books, essays, and journal articles covering critical perspectives on the development of the modern prison system since the Revolutionary era. Authors range from activist and academic Angela Davis to French philosopher and critic Michel Foucault. The students are expected to come to the weekly seminars prepared to discuss the day’s topic. They are also required to write several reflection pieces on the assigned readings.

Yet History 338 is anything but typical.

Hillyer’s class enrolls 30 students, with an equal representation of “outside” undergraduates from the college and “inside” prisoners. A few of the prisoners are close in age to the L&C students; others have been incarcerated as long as the outside students have been alive.

“Just coming to class can be very strange, very jarring,” says Claire BA ’19, a history major. “We face so many barriers—physical and emotional. It was important to establish some common ground early on so we could learn to trust each other.”

The incarcerated students, many of whom have experienced struggles in their youth with the education system, are just as uneasy about taking a for-credit college course alongside what some perceive as privileged youth.

“I definitely had apprehensions,” says a prisoner named Andrew, who goes by the nickname Turbo. “But after getting to know them, I realized they’re just people, too.” 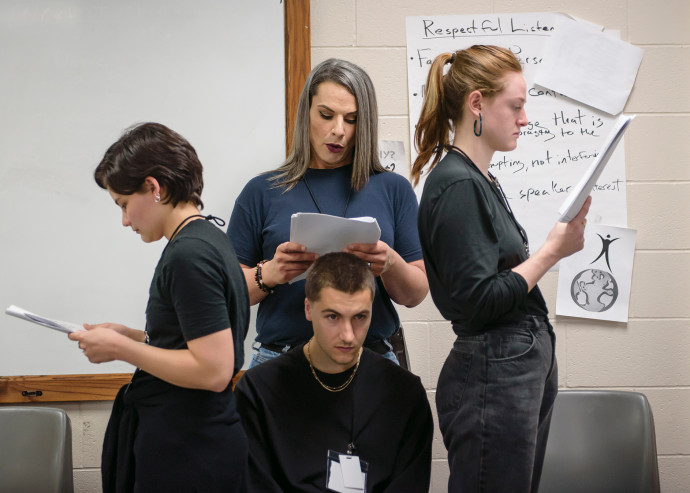 The class enrolls 30 students, with an equal representation of “outside” Lewis & Clark students and “inside” prisoners. Credit: Nina Johnson

The Inside-Out program is structured to nurture a safe, positive dynamic between all the students. “It can be a fragile ecosystem,” Hillyer notes, “but it’s the encounter itself that brings excitement and energy.”

There are strict parameters for class interactions. For example, outside students are instructed to avoid blue clothing so guards won’t mistake them for prisoners, who wear blue shirts and jeans stamped “INMATE.” All students are required to go by first names only to ensure a degree of personal privacy. And any direct inquiries about crimes or sentences are off-limits, as is any personal communication or contact between inside and outside students beyond the scope of the class.

Despite some initial tension, participants work toward making meaningful connections as the course progresses. Together, they study the rise of America’s carceral state, including the changing role of police; the political economy of the recent prison boom; and the ways race, gender, class, and history impact society. Students share personal writings that reflect some of their most intimate and painful experiences. They talk about books and music.

“I came into the class expecting a unique academic experience, but it has become a lot more than that,” says Claire. As part of the class, she shared her original poetry with others for the first time. “I’d never shared my writing with anyone, but my interactions with these people pushed me to be more vulnerable and open. You get to make such powerful connections with people, and that really opens your eyes to what it means to be on the inside of the prison system.”

For Hillyer, one of the semester highlights occurred when students were asked to select a meaningful passage from the assigned readings to discuss with the class. An inside student named Irvin instead chose a remark by one of the outside students, a senior named Sophia: “Does justice always require punishment to heal what has been broken?”

Irvin tearfully recounted how moved he had been by Sophia’s compassion. He said, “Immediately I had a renewed sense to believe that after many layers of brokenness and incarceration, someone had boldly declared how broken the world and its system of oppression are for many people.”

Ben, an incarcerated student who volunteered as Hillyer’s teaching assistant for the class, uses terms such as “magical” and “transformative” to describe the impact the program has on inside students who take the course. “One of the things that gets taken from you when you go to prison is your voice,” he explains. “Taking this class, I’ve gotten to experience kindness and respect in ways that makes me feel human again. We learn a lot from each other.” 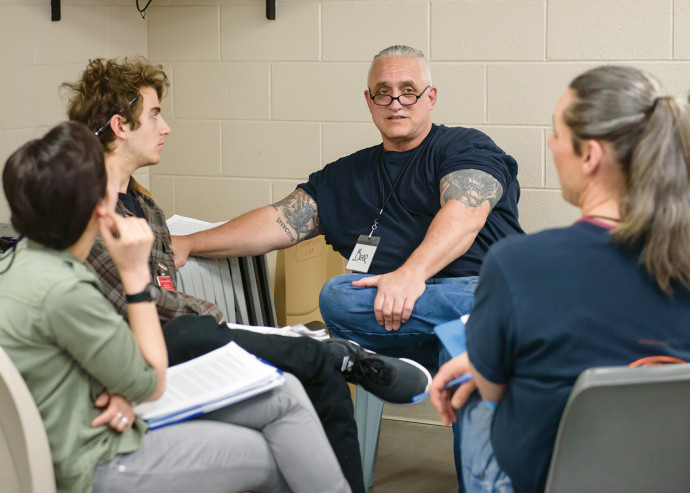 The class enrolls 30 students, with an equal representation of “outside” Lewis & Clark students and “inside” prisoners. Credit: Nina Johnson

Hillyer has taught Crime and Punishment every other spring since 2012. Her interest in teaching the course was sparked initially by her academic research into the 19th-century history of the American South as well as her volunteer work as a yoga teacher in prisons.

Buoyed by keen student interest in the proposed course, Hillyer attended Inside-Out training in Philadelphia. The intensive training sessions focused on creating a collaborative, creative environment for students. Hillyer says the sessions inspired her to revamp her own teaching by adopting what she terms a more “democratic” approach to pedagogy. “I trust more in the learning that happens between my students,” she says. “I want them to take the lead.”

When Lewis & Clark gave the go-ahead to offer the course, more than 50 students applied for the 15 “outside” spots—a trend that has continued every time the course has been offered. Demand continues to be such that prospective students—mostly juniors and seniors—must submit an essay on why they want to take the course.

Many of the prisoners sign up for the course to get a break from the monotony of their daily routines, but they often find the course exceeds their expectations. “The experience isn’t transitory,” says Ben, a prisoner who has taken many Inside-Out courses over his more than two decades in prison. He’s halfway to earning a bachelor’s degree. “None of us will ever look at the world the same way.”

For the Lewis & Clark students, the experience doesn’t just open their eyes—it inspires them to make a difference.

“Everything I’ve learned only reinforces the idea that we need a radically different alternative to the current prison system,” says Peter. “The course has made me realize the importance of serving a greater purpose and striving to make things better.”

After graduation, Peter plans to travel and study abroad. But no matter where his journey takes him, he’s confident the Inside-Out experience will stay with him always. “I don’t know what my path is going to be, whether it’s becoming a lawyer, a teacher, or something else,” he says. “But what I do know is this course has made me ready to go out into the world and make an impact.” 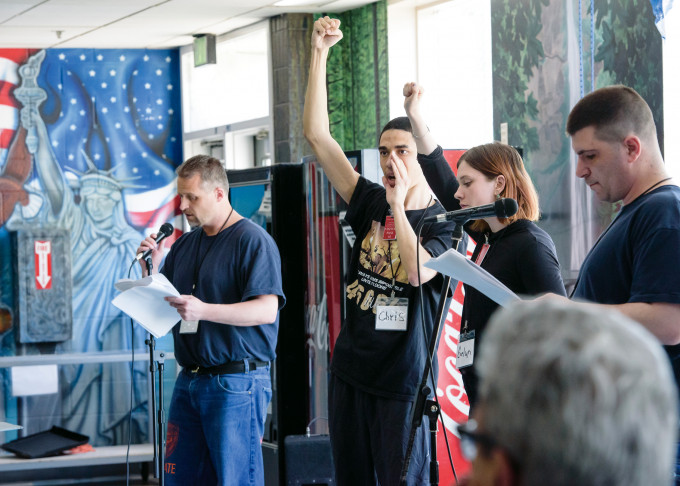 On the last day of class, feelings are running high. Not only are the Inside-Out students nervous about performing an original play based on their work, but they are also emotional about spending their final class session together.

Through the play’s spoken-word segments, the students reflect on their class experiences:

“Most of all I have my freedom / For this I am acutely grateful / To learn from those whose freedom is stolen / Again, again”

Over the seven years Associate Professor of History Reiko Hillyer has taught Crime and Punishment, she has worked to incorporate interdisciplinary elements into the course. This spring, with the help of a $5,000 Whiting Foundation grant, Hillyer is adding a theatre component into the mix. With the extra funding, she is partnering with Associate Professor of Theatre Rebecca Lingafelter to coteach the course.

The students have titled their performance Classroom 4, which refers to the name of the prison’s stark cinderblock room where the class regularly meets. The performance itself is held in the chow hall with an audience of 50 invited guests, including “outside” friends and family as well as “inside” staff and prisoners.

Although rehearsal time was tight and none of the students had any drama training, Lingafelter was able to energize the group’s collective creativity to produce a unique piece of devised theatre. “My goal has been to help them use their voices and bodies to tell their stories,” she says. “The performance is not as important as seeing them connect with each other as they engage with important questions” raised by the course: In what ways are inside and outside students different yet the same? What is the meaning of justice?

The class performance features stirring renditions of original poetry and prose. One inside student delivers a monologue describing his harrowing experiences toiling on a prison chain gang in the South. An outside student of color recites a poignant poem she wrote about her childhood encounters with prejudice and bigotry.

As the play goes on, the students create several silent tableaux reenacting scenes from history—public whippings, police violence, and the infamous uprising in New York’s Attica Prison that galvanized a prisoners’ rights movement in the 1970s.

The performance concludes with the students coming together in a circle to sing the traditional African American spiritual “Sometimes I Feel Like a Motherless Child.” A sorrowful song, it nevertheless ends on a note of hope: “Sometimes I feel like an eagle in the air / I’m gonna spread my wings and fly.”

Afterward, the students and professors gather to share a private meal—the one and only chance they’ve gotten to socialize—and to say their goodbyes. In doing so, they embody the course’s core themes: redemption, healing, and humanity.