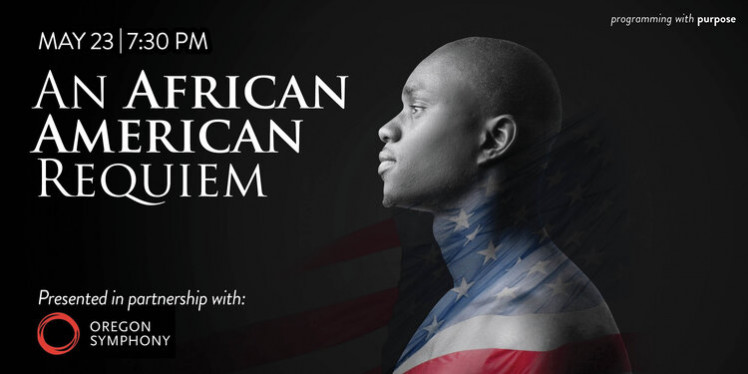 In August 2019, the Oregon Community Foundation awarded the Resonance Ensemble $100,000 to enable them to pursue an ambitious collaboration with the Oregon Symphony and several independent artists to put on the world premiere of Damien Geter’s An African American Requiem on May 23, 2020, at the Arlene Schnitzer Concert Hall. Then in late October, Resonance was awarded $20,000 from the Miller Foundation and another $20,000 from the Collins Foundation. 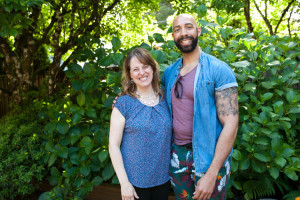 Fitzgibbon and Geter.“We have this sense that Resonance is having a moment—that we are getting this national recognition and also Oregon recognition and the ability to operate on a much larger stage,” Resonance Ensemble’s Artistic Director and Lewis & Clark’s Associate Professor of Music and Director of Choral Activities Katherine FitzGibbon said. “It feels as though we’re tapping into a need that many people have to see experiences represented on the concert stage and in the classical music sphere who haven’t been represented historically.”

“I hope that this leads to important conversations in Oregon and beyond,” Geter said. “As someone who considers himself an activist through art, Requiem is the perfect marriage of the two: art plus activism.”

One of the biggest supporters of Requiem was Professor Emerita of German Studies and Resonance Ensemble’s Board Chair Dinah Dodds. Dodds taught at Lewis & Clark for 36 years, and remained involved with the college through the Dinah Dodds Endowment for International Education and by coming out of retirement in 2011 to chair the music department. Dodds passed away on September 12, 2019.

“There is little I can say that can speak to the depth of gratitude and love I have for Dinah,” FitzGibbon said. “She epitomized service to others. She worked tirelessly and gave so much of her time, energy, and passion over the last few years, all while living with cancer. She was a huge champion of An African American Requiem.”

In light of the 400th anniversary of the arrival of the first ship containing enslaved Africans on this continent, Geter also wrote a piece called 1619, which will be performed by Lewis & Clark’s chamber choir Cappella Nova on Friday, December 6.