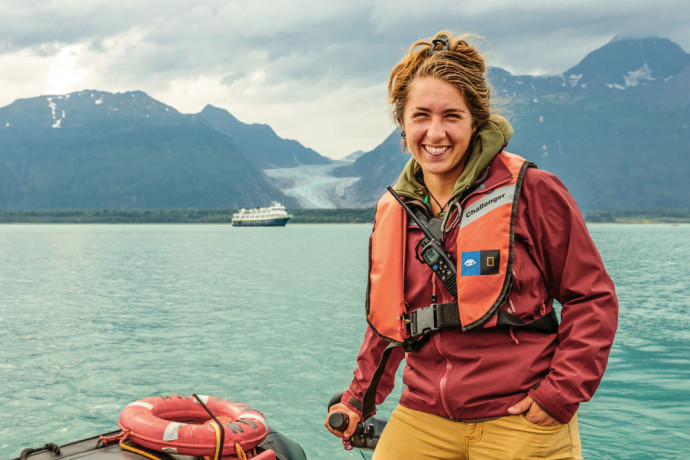 Julia Huggins BA ’13, who majored in biology while at Lewis & Clark, describes herself as a “biogeochemistry philosopher of environmentalism.”

Since graduating, she has led expeditions for National Geographic, conducted research in Patagonia’s temperate rain forest, and started a nonprofit to give more kids access to the outdoors.

“I tried to take as many courses as I could at Lewis & Clark that didn’t fit into a clean little box. I continued on that path after I graduated,” Huggins says.

Earlier this year, Huggins was awarded the Vanier Scholarship to continue her PhD in biogeochemistry at the University of British Columbia (UBC), which she began in 2017. Referred to colloquially as the “Rhodes Scholarship of Canada,” this highly selective award attracts doctoral students from all over the world who demonstrate both leadership skills and a high standard of scholarly achievement. Nominated by UBC, Huggins will receive $50,000 a year for the next three years to fund her research on oxygen loss in the oceans and the environmental impacts of marine microorganisms.

Huggins’ resume reflects her passion for combining academic rigor with deep explorations in the field. So it’s not surprising that, within six months of starting at UBC, she was promoted to chief scientist of the university’s oceanography research program. She is responsible for coordinating expeditions to study the marine environment.

Her experience with College Outdoors also helped Huggins to quickly move up the ranks with National Geographic Expeditions, becoming the youngest member of the team. As a lead naturalist, Huggins hopes to incorporate oceanography research into her future trips.

Huggins grew up in a supportive family that faced numerous financial hardships. Challenged by dyslexia, she did not always think of herself as a high achiever in the sciences. Grateful for the scholarships and internships that allowed her to attend Lewis & Clark, she says that working closely with faculty and the community led her to explore and discover new dimensions of the world and herself.

“The support I got at Lewis & Clark enabled me to get to this point,” says Huggins. “The relationships I had with professors who got to know me on a really individual level and taught me in inspirational ways, the fellowships that gave me opportunities to travel and study abroad … all of those things built my résumé that led me to National Geographic and grad school and now the Vanier.”