A Man With Vision

Inside RetroSpecs historic eyewear store in West Hollywood, California, a four-member crew from Apple set up cameras, lights, and microphones for a commercial shoot. They wanted to hear how Jay Owens uses Mac computers to manage and grow his business.

“They interviewed me in front of our pre-WWII eyeglass archives,” says Owens, who co-owns the business with his wife, Marya Francis. “The story of Apple is a great American success story. As an entrepreneur, it’s inspiring to use their beautifully designed products in our stores and in our restoration factory.”

Owens’ personal journey is motivational as well. His trajectory began when he was a Lewis & Clark baseball pitcher who bought his first pair of historic 1930s eyeglasses at a Portland flea market. “They were round with cable temples that wrapped around my ears and stayed in place when I was pitching,” he says. “And I thought they looked cool when I participated in the anti-apartheid movement on campus.”

More than 25 years later, the husband-and-wife team own high-end stores in Los Angeles, San Francisco, and Las Vegas. They also have exclusive dealerships in more than 250 cities across the United States, Canada, Europe, and Asia. “Our mission is to preserve the revolutionary designs and unparalleled quality of early and late modern eyewear manufactured from the 1890s to the 1980s.” According to an article in the New York Times, RetroSpecs can also claim a celebrity following, including Marc Anthony, Michael J. Fox, P. Diddy, Tom Cruise, and Jennifer Aniston,

In 2014, Owens and Francis launched their own contemporary collection, Cuthbert & Chen, named in honor of family and inspired by their love of the craft and design of historical eyewear. Philanthropy and environmental issues are also their passions. They run the largest eyewear recycling initiative in the world and also founded Larchmont Charter School in West Hollywood, a socioeconomically diverse public school that their three children attended.

Entrepreneurship wasn’t on Owens’ radar as a young boy growing up in Denver. Immersed in the world of ice hockey, he dreamed of playing professionally and put a plan in place to achieve that goal. His strategy was upended during some trouble at a hockey boarding school and a gap year he took between high school and college, when he spent a year in France. 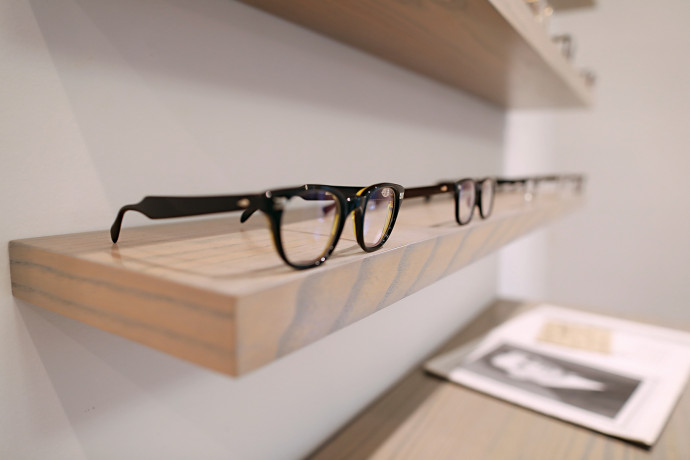 “My whole mindset changed while I was in Lyon,” says Owens. “I went from being this crazy hockey player to a guy who became fascinated with different cultures, languages, and travel.” He quit playing hockey and enrolled at Lewis & Clark, where he studied philosophy and political science and majored in foreign languages. He became fluent in French and studied every level of Chinese at the college.

At L&C Owens continued collecting historic eyewear as a hobby for friends and family, feeding his fascination with design, function, and history. He considered attending Johns Hopkins’ center for international studies in Nanjing, China, after graduation, but decided to rent an RV and “get to know my own country” instead. For three years, he traveled from state to state, reading history books, eating regional cuisine, and buying, restoring, and reselling historic eyeglasses. Along the way, he read an article about props used by Hollywood’s movie industry and decided that Los Angeles would be a good place to settle and set up shop.

Owens says RetroSpecs runs a bit like a factory. Restoring historic eyewear begins with an assembly line of about 20 workers who disassemble the glasses into component parts. Every month thousands of individual parts, screws, and nose pads are polished, catalogued, and then reassembled according to demand. “It’s similar to rebuilding rare vintage cars from parts,” he says.

His fluency in French has helped him open 30 exclusive accounts in that country, and his language and connections in China allow him to personally source and manufacture component parts—everything from hand-threaded screws to eyeglass cases and lenses.

When he’s not working, Owens still enjoys sports. He plays in a men’s hockey league in L.A. and helps coach his daughter’s soccer teams and sons’ hockey and baseball teams. “Believe,” the motto espoused by his former L&C baseball coach, Jerry Gatto, is a motivational concept that’s helped him personally and professionally.

“To succeed, you need to start with a passion,” he says. “Planning, especially financial planning, is equally essential, but at some point you gotta ‘believe,’ and just go for it.”