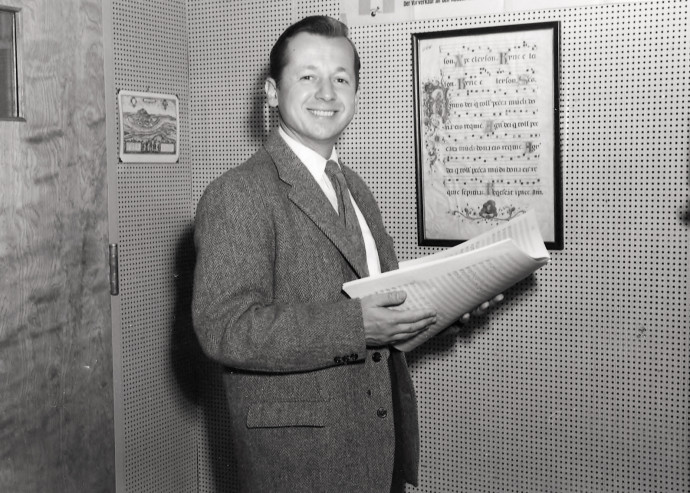 Born in Breslau, Germany, Pauly spent the early years of his youth in Berlin, where his father was director of the Berlin Opera.

After the war, Reinhard and Connie returned to New York, where he enrolled for his MA in music history at Columbia. He subsequently attended Yale University, where he earned his master’s degree in violin and began work toward his PhD in music history.

On almost a whim, Reinhard often mused, he and Connie decided it would be nice to locate to the Pacific Northwest. In 1948, Lewis & Clark President Morgan O’Dell hired Pauly as an instructor of musicology and strings. While at Lewis & Clark, his academic career and increasing international recognition as a scholar of the music of Haydn, Mozart, and Beethoven, among others of the Classic Period, brought distinction to the college and earned him a Guggenheim Fellowship. He retired as a full professor in 1985.

At Lewis & Clark, Pauly served on countless committees, headed the music department, championed a rich music curriculum, and maintained close friendships with trustees and benefactors—particularly Agnes Flanagan, namesake of the chapel. In 2013 the Paulys endowed the Reinhard and Constance Pauly Orchestral Strings Scholarship.

Survivors include his children, Deborah, Michael, and Rebecca.

—Adapted from a tribute written by Lee Garrett, professor emeritus of music.