Cabaret in the Time of Coronavirus 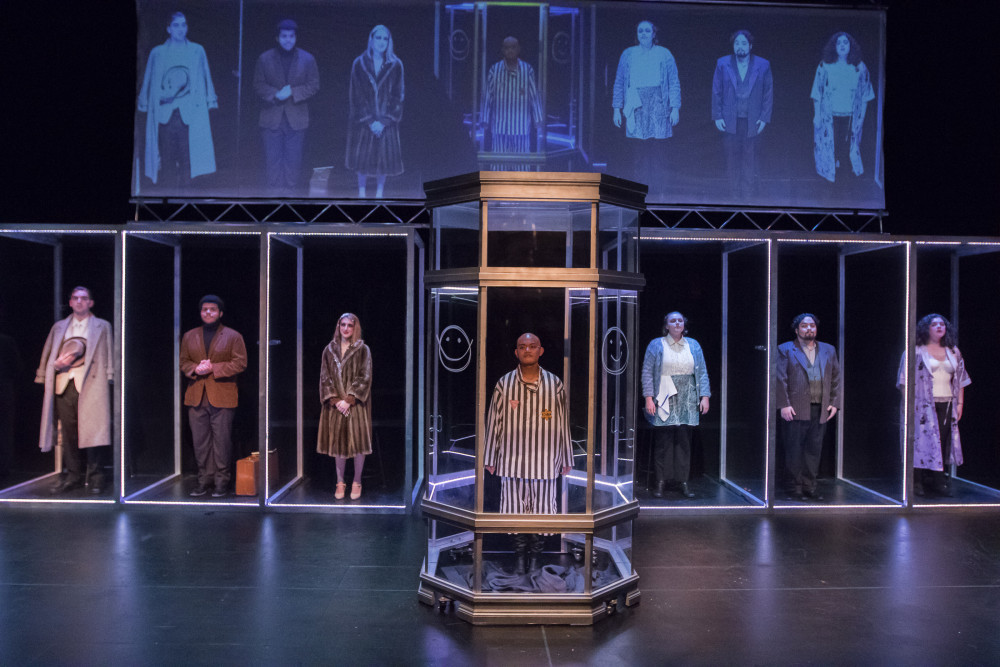 The Lewis & Clark Theatre Department, in collaboration with the Music Department, presented Cabaret (1998 version). Due to COVID-19 restrictions, the performance was a hybrid of in-person performance in front of a small audience alongside a virtual projection that was live-streamed to a remote audience.

“I have always loved Cabaret. People often have the idea that musicals are pure entertainment, that they are superficial and shallow, and that they have little to say about the world, and about what it means to be a human being,” said Director and Professor of Theatre Štěpán Šimek. “That is of course plainly wrong, and Cabaret is the best example of a musical that has a deep political and human dimension.”

Taking place in Berlin, Germany in the early 1930s, Cabaret describes a city steeped in turmoil. Politically, the city is facing division and rising hatred towards one another. Socially, the masses still enjoy parties and pursuits of pleasure. This is seen through the performances in the Kit Kat Klub, where everyone attempts to enjoy the show without a care, while also navigating the undercurrent of tension and political change taking over the city.

“As a double major in theatre and political science, it was very interesting to work on a show in which I was able to explore the politics of Germany” said San Mateo, California native Amanda Masini BA ’22, who served as the show’s assistant director. “I loved being able to collaborate with my friends and create art together that was both fun and deeply meaningful.”

The decision to produce Cabaret was made more than a year ago. The timing was meant more to comment on the state of politics and society surrounding the 2020 election than on a global pandemic. For a short time, Šimek considered changing the show into something easier to produce while remaining in accordance with health regulations.

“I immediately realized that the restrictions are actually a challenge,” continued Šimek. “Producing a full-fledged musical at this time of the plague was an audacious undertaking, but it was exactly that audacity, if not the sheer impossibility of pulling it off that drew us all towards it.”

Student dedication to observing guidelines and innovative technological additions made the hybrid format possible. There were sixteen cameras total around the two separate stages in use and within each actor’s plexiglass box. Actors engaged with their fellow cast members through the barriers, and through cameras that then transposed their interaction onto the screen. 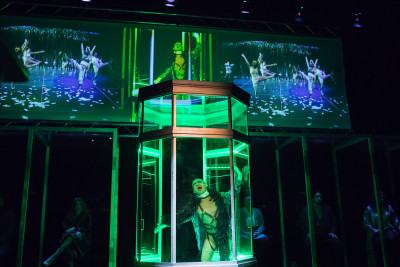 Credit: Owen Carey“This show was like nothing I’ve ever done before. Not only were we performing in two different spaces simultaneously, but we were also performing to two different audiences simultaneously,” continued Masini. “We were live streaming with all sixteen cameras while the actors were in plexiglass boxes for the whole show unable to move or touch each other. The fact that we were able to pull together such an enjoyable and cohesive show that still told the story faithfully while adhering to all COVID-19 regulations was a feat that no other college or theatre has attempted to do.”

Rehearsals were conducted virtually and in person. Every decision prioritized cast member safety, but still kept with presenting the deeper themes of the musical in a compelling way.

“It was challenging to create an interesting and dynamic-looking show with eight dancers observing social distancing guidelines,” said choreographer Emma Bryan BA ’22. The psychology major and dance minor from Missoula, Montana was forced to reimage how the ensemble could interact without physical proximity. “I found ways to make the spacing and dancing work to be captured by the camera, and meeting all the social distancing guidelines.”

Amber Adamski BA ’22, a theatre major and art history minor from Truckee, California who served as assistant costume designer for the production, found the hybrid performance equally fulfilling and frustrating. “The difficult aspect for me specifically was designing and making the very things that would keep the performers safe—the masks,” said Adamski. “But the best part, in all honesty, was just getting to see and work with my peers in person again, and I think it’s really impressive that we pulled it off.”