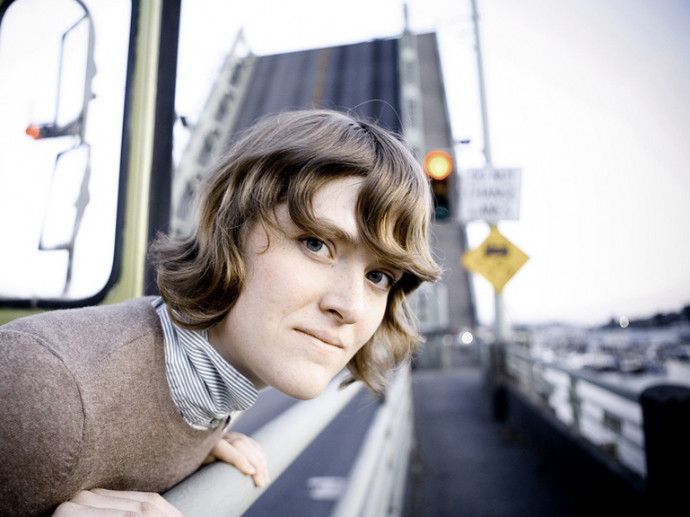 Standing onstage before a packed conference at the Massachusetts Institute of Technology, Amber Case made her argument for the importance of online fan communities. Devotees of shows like Star Trek, The Blair Witch Project, and Lost, she explained, have changed the viewing experience into a 360-degree interactive adventure.

“I had a crazy goal to speak at MIT before the age of 27,” Case says. “I got the chance six months after graduating from Lewis & Clark.”

Case is a cyborg anthropologist. She studies the interaction between humans and computers, examining how our relationship with information technology is changing the way we think, act, and understand the world around us.

Case, who rarely gives mainstream media interviews because of accuracy concerns, made an exception with Fast Company magazine. Pleasantly surprised with the resulting article, she was subsequently caught off guard when the publication named her one of the Most Influential Women in Technology in 2010.

“I learned about it online through my network of friends and colleagues,” she says. “It felt very much like a small-town experience, being congratulated by an amazing community.”

Case has always been goal-oriented and forward-thinking. In high school, she had her sights set on attending an eastern Ivy League college. But tales of laboratory sabotage and a cutthroat academic culture gave her pause. She received a generous financial aid package from Lewis & Clark, and when a Portland friend sent a photo of the lush Northwest landscape—the opposite of her hot, dry surroundings in Wyoming—she decided to head for Oregon.

Case credits Deborah Heath, associate professor of anthropology, for introducing her to the concept of cyborg anthropology during a 2005 spring philosophy extravaganza.

“I read a lot of science fiction books when I was younger, and cyborg anthropology is the real-world manifestation of the questions that science fiction poses,” she says.

Case, with Heath as her advisor, wrote her senior thesis on the technosocial aspects of the cell phone. During her final semester, she designed her own independent study course on corporate information systems.

“I attended all the local technology conferences, studying the real world from an academic point of view. That networking helped me secure consulting jobs,” says Case. “It’s important to create your own opportunities, not wait for jobs to come to you.”

Case has consulted with the Portland based advertising agency Wieden+Kennedy, where she helped initiate a two-year Facebook branding campaign for Old Spice. She has also conducted demographic research for Levi Strauss and Target, writing computer programs to search the Web for “everything that’s ever been said about the brand” and put it into a dashboard format for easy access and analysis.

Case is personally intrigued by the concept of time and space compression. “Actions and devices will become lighter and lighter, and social interactions will continue to become more and more mobile,” she says. “The convergence of various technologies will result in rapid learning and communication never imagined before.”

In June, Case accepted a full-time position as a user-experience designer at Vertigo in Portland. Vertigo is an award winning design and development firm that uses the latest Microsoft technologies to redefine the user experience for the Web, mobile, and multitouch environments.

“The next wave of successful technology will blend into the background,” she says, “allowing humans to intuitively interact with one another.”